Trump watches on TV as House votes to impeach

With social media cut off, he remains quiet, out of sight by JONATHAN LEMIRE, JILL COLVIN AND ZEKE MILLER THE ASSOCIATED PRESS | January 14, 2021 at 4:39 a.m. 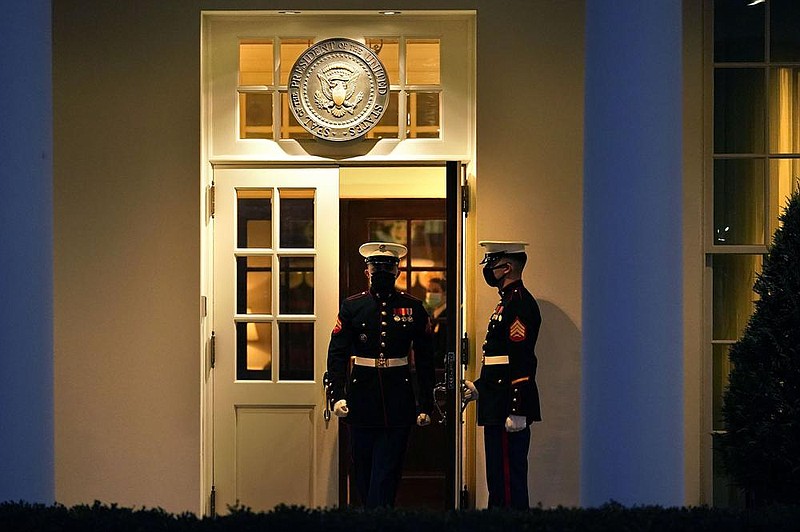 Two Marines change guard duty Wednesday evening at the entrance to the West Wing of the White House. The guard’s presence signifies that the president is in the Oval Office. (AP/Gerald Herbert)

For more than four years, Trump has dominated the national discourse like no one before him. Yet when his legacy was set in stone Wednesday, he was left on the sidelines.

Trump now stands as the only president to be charged twice with a high crime or misdemeanor.

Trump kept out of sight in a nearly empty White House as impeachment proceedings played out at the heavily fortified U.S. Capitol. There, the damage from last week's riots provided a visible reminder of the insurrection that the president was accused of inciting.

Abandoned by some in his own party, Trump could do nothing but watch history unfold on television. The suspension of his Twitter account deprived Trump of his favored means to send messages to Republicans.

He was finally heard from hours after the vote, in a video that condemned the insurrection at the Capitol and warned his supporters against engaging in any further violence.

Trump said not a word about his impeachment in the video, though he complained about the ban on his social media accounts.

With only a week left in Trump's term, there were no messages from the White House fighting the proceedings on the other end of Pennsylvania Avenue and no organized legal response. Some congressional Republicans did defend the president during House debate in impeachment, their words carrying across the same space violated by rioters one week earlier during the Capitol riot that left five people dead.

In the end, 10 Republicans voted to impeach.

It was a marked change from Trump's first impeachment. That December 2019 vote in the House, which made Trump only the third president ever impeached, played out along partisan lines. The charges then were that he had used the powers of the office to pressure Ukraine to investigate a political foe, Joe Biden, now the president-elect.

At that time, the White House was criticized for failing to create the kind of robust "war room" that President Bill Clinton mobilized during his own impeachment fight. Nonetheless, Trump allies did mount a pushback campaign. There were lawyers, White House messaging meetings, and a media blitz run by allies on conservative television, radio and websites.

Trump was acquitted in 2020 by the GOP-controlled Senate and his approval ratings were undamaged. But this time, as some members of his own party accused him of committing impeachable offenses, Trump was isolated and quiet.

The third-ranking Republican in the House, Rep. Liz Cheney of Wyoming, said there had "never been a greater betrayal" by a president. Senate Majority Leader Mitch McConnell, R-Ky., told colleagues in a letter that he had not decided how he would vote in an impeachment trial.

But there was no effort from the White House to line up votes in the president's defense.

The team around Trump is hollowed out, with the White House counsel's office not drawing up a legal defense plan and the legislative affairs team largely abandoned. Trump leaned on Sen. Lindsey Graham, R-S.C., to push Republican senators to oppose removal. Graham's spokesman said the senator was making the calls of his own volition.

Trump and his allies believed that the president's sturdy popularity with the lawmakers' GOP constituents would deter them from voting against him.

The president was angry with perceived disloyalty from McConnell and Cheney, and has been deeply frustrated that he could not hit back using his Twitter account. Trump watched much of the day's proceedings on TV from the White House residence and his private dining area off the Oval Office.

A short time before he was impeached, Trump was in the White House East Room presenting the National Medal of Arts to singers Toby Keith and Ricky Skaggs as well as to former Associated Press photographer Nick Ut.

His paramount concern was what a second impeachment could do to his immediate political and financial future, according to four White House officials and Republicans close to the West Wing. They were not authorized to discuss private conversations and spoke on condition of anonymity.

There's the possibility that if the Senate were to convict him, he could be barred from seeking election again, dashing any hopes of another presidential campaign.

A White House spokesman did not respond to questions about whether anyone in the building was trying to defend Trump.

One campaign adviser, Jason Miller, argued that Democrats' efforts will serve to galvanize the Republican base behind Trump and end up harming Biden. 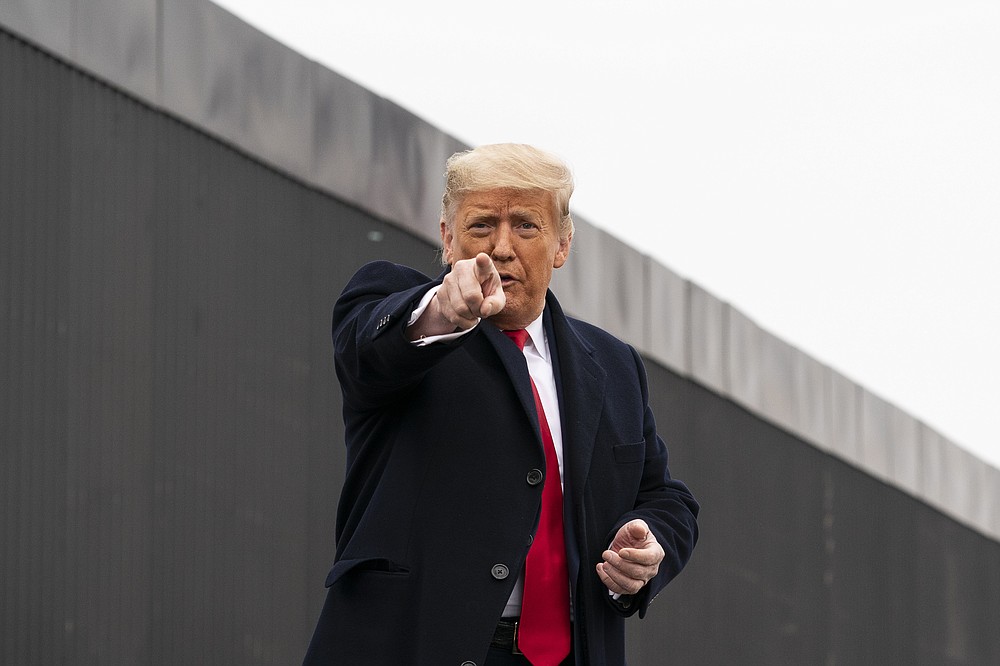 President Donald Trump points to a member of the audience after speaking near a section of the U.S.-Mexico border wall, Tuesday, Jan. 12, 2021, in Alamo, Texas. (AP Photo/Alex Brandon) 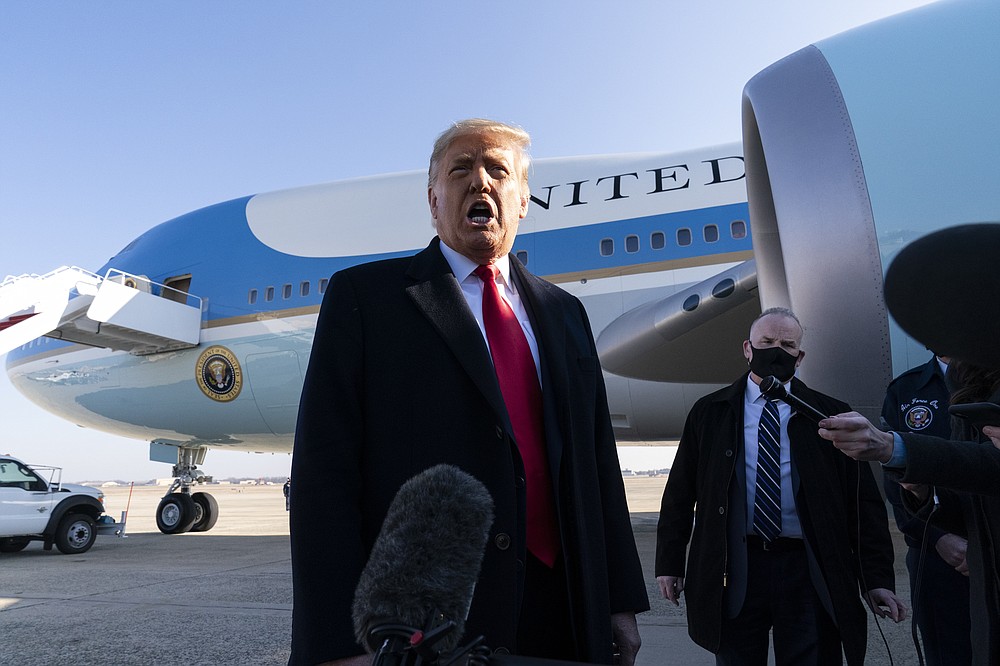 President Donald Trump speaks with reporters as he walks to Air Force One upon departure, Tuesday, Jan. 12, 2021, at Andrews Air Force Base, Md. (AP Photo/Alex Brandon) 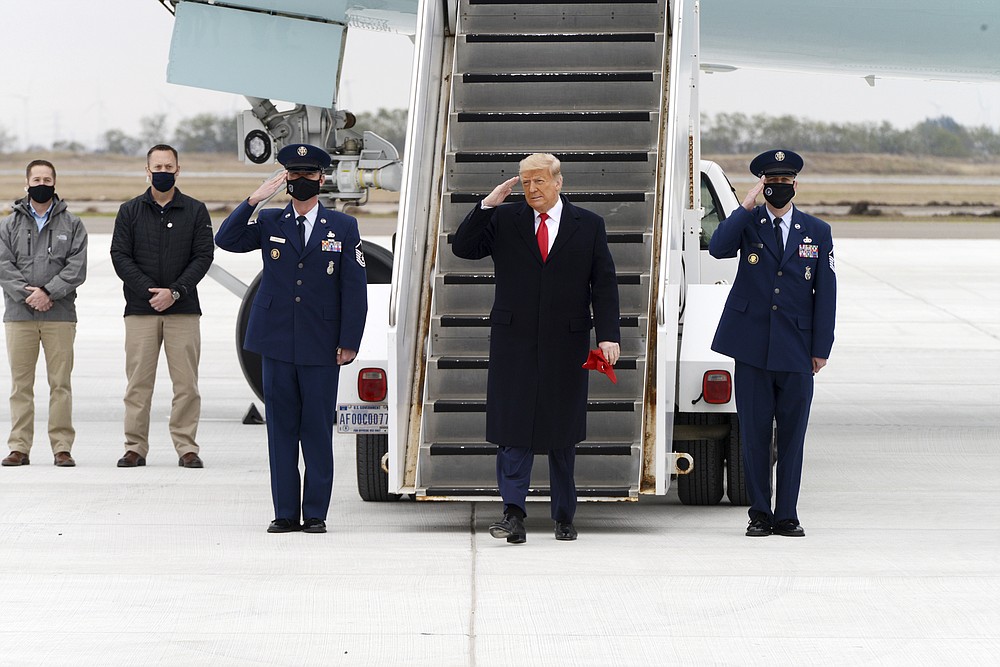