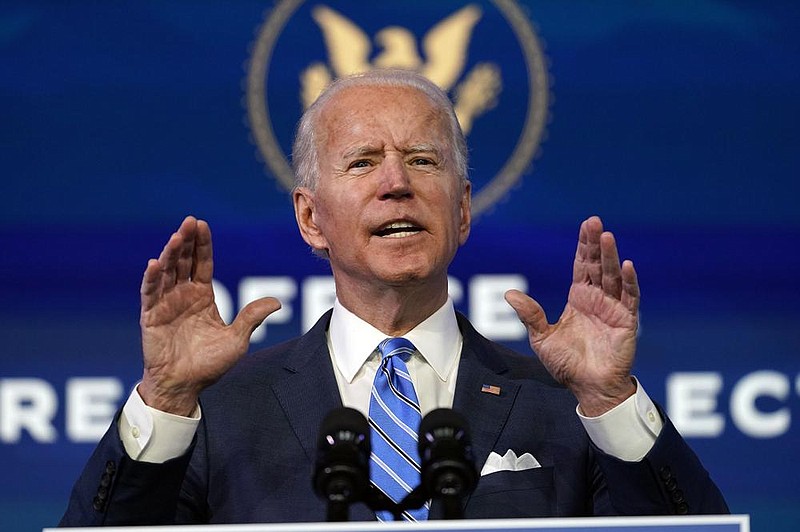 “I know what I just described does not come cheaply, but we simply can’t afford not to do what I’m proposing,” President-elect Joe Biden said Thursday night in Wilmington, Del., in presenting his coronavirus relief plan. More photos at arkansasonline.com/115covid19/. (AP/Matt Slocum)

WILMINGTON, Del. -- Saying the nation faces "a crisis of deep human suffering," President-elect Joe Biden unveiled a $1.9 trillion coronavirus plan Thursday to turn the tide on the pandemic, speeding up vaccines and pumping out financial help to those struggling with the prolonged economic fallout.

Called the "American Rescue Plan," the legislative proposal would meet Biden's goal of administering 100 million doses of vaccine by the 100th day of his administration, while advancing his objective of reopening most schools by the spring. On a parallel track, he believes it will deliver another round of aid to stabilize the economy while the public health effort seeks the upper hand on the pandemic.

"I know what I just described does not come cheaply, but we simply can't afford not to do what I'm proposing," Biden said in a nationwide address. "If we invest now boldly, smartly and with unwavering focus on American workers and families, we will strengthen our economy, reduce inequity and put our nation's long-term finances on the most sustainable course."

His plan includes $1,400 checks for most Americans, which on top of $600 provided in the most recent covid-19 bill would bring the total to $2,000. It would also extend a temporary boost in unemployment benefits and a moratorium on evictions and foreclosures through September.

And it shoehorns in long-term Democratic policy aims such as increasing the minimum wage to $15 an hour, expanding paid leave for workers, and increasing tax credits for families with children.

The political outlook for the legislation remained unclear. In a joint statement, House Speaker Nancy Pelosi and Senate Democratic leader Charles Schumer praised Biden for including liberal priorities, saying they would move quickly to pass it. But Democrats have narrow margins in both chambers of Congress, and Republicans will push back on issues that range from increasing the minimum wage to providing more money for states, while demanding inclusion of their priorities, such as liability protection for businesses.

"Remember that a bipartisan $900 billion #covid19 relief bill became law just 18 days ago," tweeted Sen. John Cornyn, R-Texas. But Biden had said that was only a down payment, and he promised another major bill focused on rebuilding the economy.

His relief bill would be paid for with borrowed money, adding to trillions in debt the government has already incurred to confront the pandemic. Aides said Biden will make the case that the additional spending and borrowing is necessary to prevent the economy from sliding into an even deeper hole. Interest rates are low, making debt more manageable.

[Video not showing up above? Click here to watch » https://www.youtube.com/watch?v=-hxokOfSzuA]

Biden has long held that economic recovery is inextricably linked with controlling the coronavirus. "Our work begins with getting covid under control," he said in his election victory speech. "We cannot repair the economy, restore our vitality or relish life's most precious moments until we get it under control."

The plan comes as a divided nation is in the grip of the pandemic's most dangerous wave yet. So far, more than 385,000 people have died of covid-19 in the U.S. And government numbers out Thursday reported a jump in weekly unemployment claims, to 965,000, a sign that rising infections are forcing businesses to cut back and lay off workers.

Under Biden's multipronged strategy, about $400 billion would go directly to combating the pandemic, while the rest is focused on economic relief and aid to states and localities.

About $20 billion would be allocated for a more disciplined focus on vaccinations, on top of some $8 billion already approved by Congress. Biden has called for setting up mass vaccination centers and sending mobile units to hard-to-reach areas.

The plan provides $50 billion to expand testing, which is seen as key to reopening most schools by the end of the new administration's first 100 days. About $130 billion would be allocated to help schools reopen without risking further contagion.

The kindergarten-through-12th-grade funding is meant to address a wide range of needs. That includes expenses associated with mitigating virus spread inside buildings, such as improving ventilation systems, buying personal protective equipment and ensuring schools have nurses. It also addresses expenses associated with social distancing inside schools -- reducing class sizes, modifying spaces and increasing the number of buses.

The package includes funding for mental-health support for students and tutoring or summer school to help recover lost time in the classroom and learning. The money could also be used by states to prevent cuts to prekindergarten programs.

The plan would fund the hiring of 100,000 public health workers, to focus on encouraging people to get vaccinated and on tracing the contacts of those infected with the coronavirus.

There's also a proposal to boost investment in genetic sequencing, to help track new virus strains including the more contagious variants identified in the United Kingdom and South Africa.

Throughout the plan, there's a focus on ensuring that minority communities that have borne the brunt of the pandemic are not shortchanged on vaccines and treatments, aides said.

With the new proposals comes a call to redouble efforts on the basics.

Biden is asking Americans to override their sense of pandemic fatigue and recommit to wearing masks, practicing social distancing and avoiding indoor gatherings, particularly larger ones. It's still the surest way to slow the covid-19 wave, with more than 4,400 deaths reported just on Tuesday.

With the backing of Congress and the expertise of private and government scientists, the Trump administration has delivered two highly effective vaccines and more are on the way. Yet a month after the first shots were given, the nation's vaccination campaign is off to a slow start with about 10.3 million people getting the first of two shots, although more than 29 million doses have been delivered.

Biden believes the key to speeding that up lies not only in delivering more vaccine but also in working closely with states and local communities to get shots into the arms of more people. The Trump administration provided the vaccine to states and set guidelines for who should get priority for shots, but largely left it up to state and local officials to organize their vaccination campaigns.

As the coronavirus overwhelms U.S. hospitals, the Trump administration has balked at providing access to information and failed to consult with its successors, including about distributing the vaccines that offer the greatest hope of emerging from the pandemic.

For more than a month, the Biden team pressed to attend meetings that offered "real-time information on production and distribution of vaccine" -- important details for the president-elect's advisers debating ways to get the pandemic under control, said a transition official, speaking on the condition of anonymity to discuss private interactions.

While health agencies' career staffs have been helpful, it was not until this week that Biden officials were allowed to attend meetings of Operation Warp Speed, the administration's initiative to accelerate vaccine development and distribution. They were also not invited to the two Warp Speed sessions this weekend when Trump officials decided on changes to try to speed up the sluggish vaccine rollout, nor were they briefed on those changes in advance.

While some of those policies mirrored Biden plans, others raised red flags among the president-elect's advisers. One is a recommendation to offer vaccines immediately to tens of millions of people under age 65 who have high-risk medical conditions -- a change the Biden team fears could overwhelm state supply and already stressed sign-up systems, while creating unrealistic expectations for those eager to get inoculated.

A senior Trump official denied that there was any effort to keep Biden in the dark about Warp Speed activities. The official, who spoke on the condition of anonymity to discuss internal deliberations, said that while Biden officials only recently have been invited to Warp Speed meetings, they have been regularly briefed on what has been discussed.

The official said it was not appropriate for the Biden team to take part in making decisions because the United States has "one government at a time." He added that when Biden becomes president, "they can change everything if they want."

Separately, Texas Gov. Greg Abbott announced Thursday that his state has distributed more than 1 million doses of the covid-19 vaccine.

"This is the biggest vaccination effort we have ever undertaken, and it would not be possible without the dedication and tireless efforts of our health care workers," said Abbott, a Republican who has said he will not order new lockdowns even amid rising numbers of new cases and hospitalizations.

According to state health officials, Texas had more than 14,000 covid-19 patients in hospitals, and the state's death toll has passed 30,000, with 426 new fatalities reported Thursday. The state has reported more than 800 deaths in the past two days.

"We still have a long road ahead of us, but Texans continue to prove that we are up to this challenge," Abbott said.

The governor has said the supply of vaccine remains limited but urged the federal government to ship more doses more quickly. Doses are being given to front-line health care workers, residents at nursing homes and assisted living facilities, people who are over age 65 or who have chronic medical conditions that put them at greater risk of serious illness or death.

Information for this article was contributed by Ricardo Alonso-Zaldivar, Bill Barrow, Josh Boak and staff members of The Associated Press; and by Laura Meckler, Laurie McGinley, Amy Goldstein, Lena H. Sun and Isaac Stanley-Becker of The Washington Post. 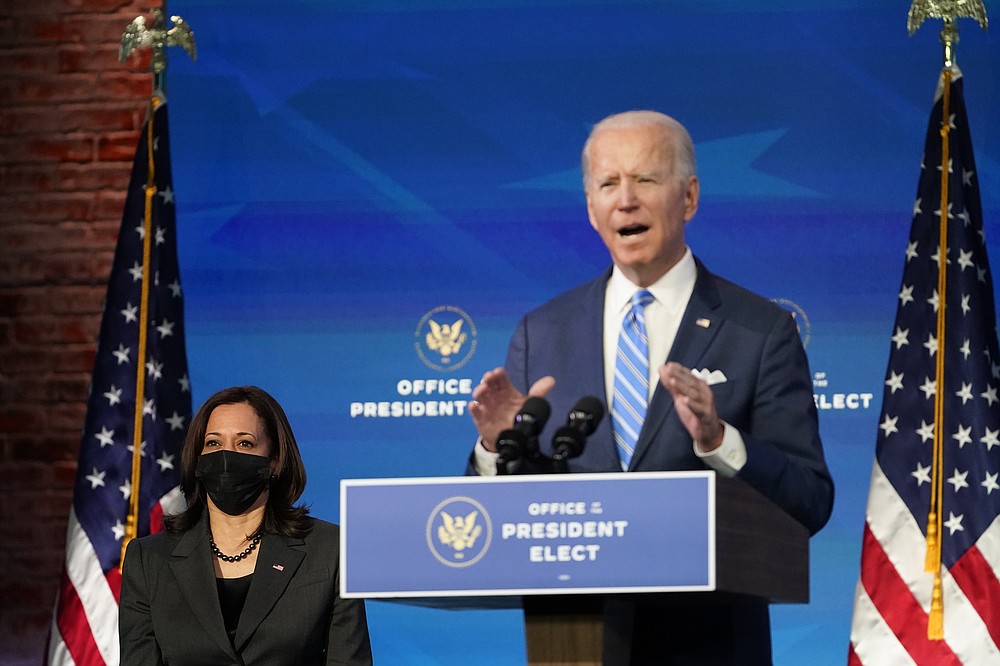 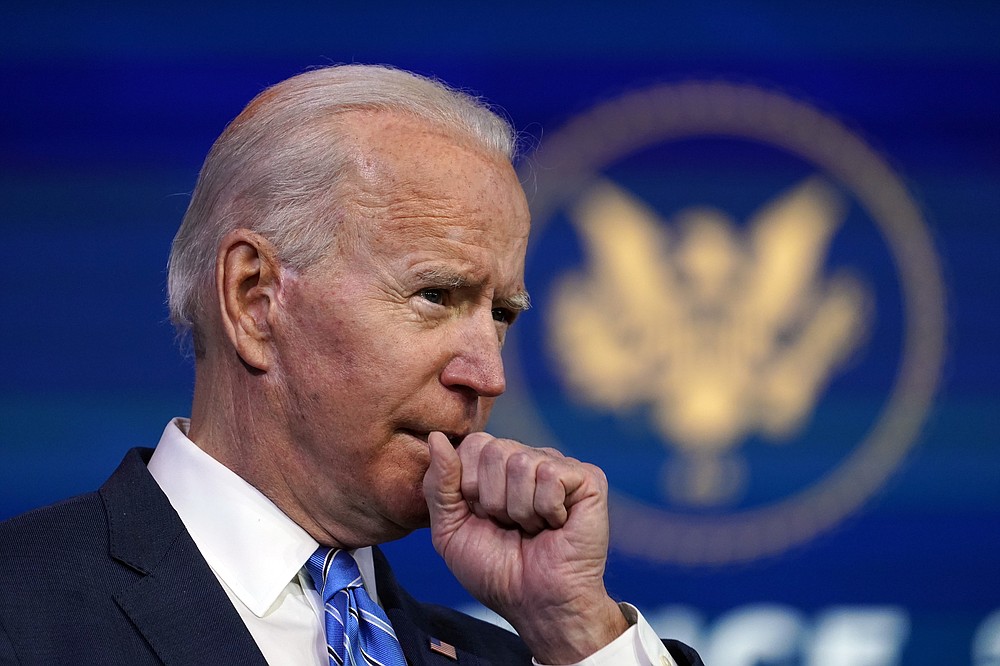 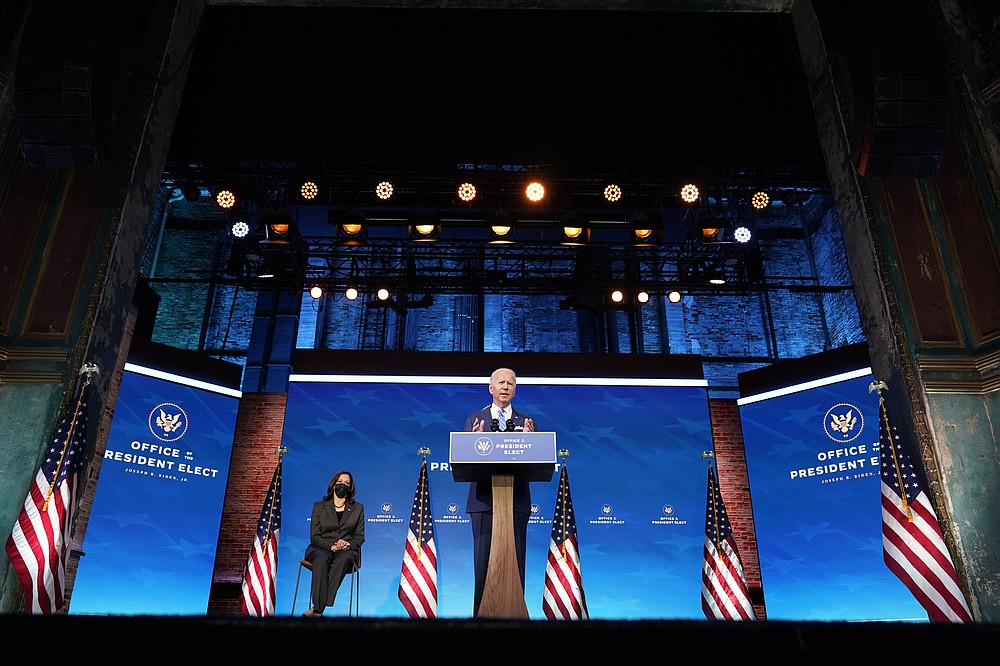 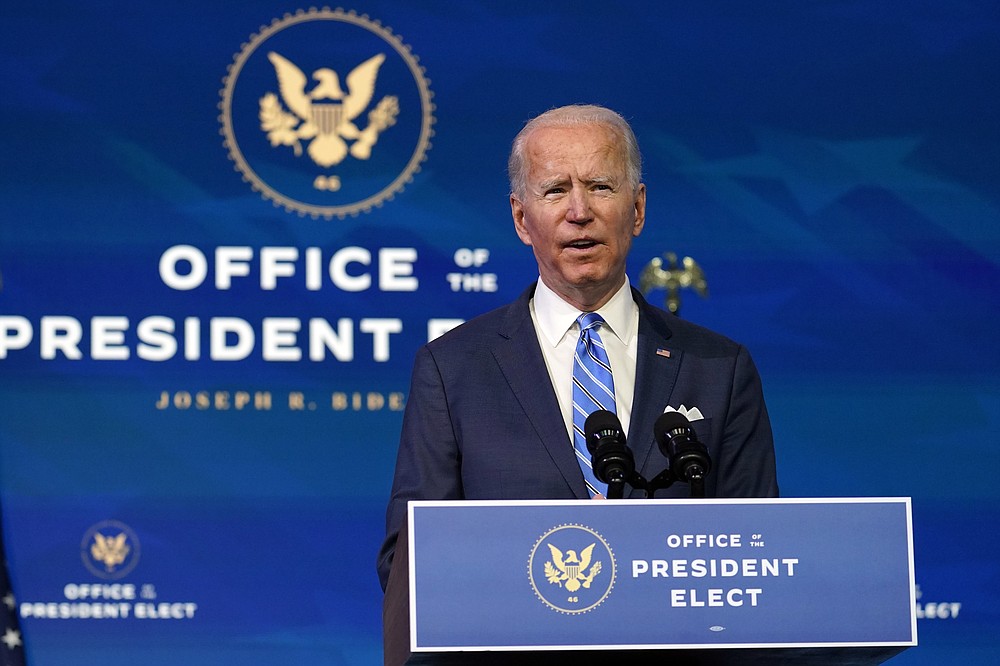 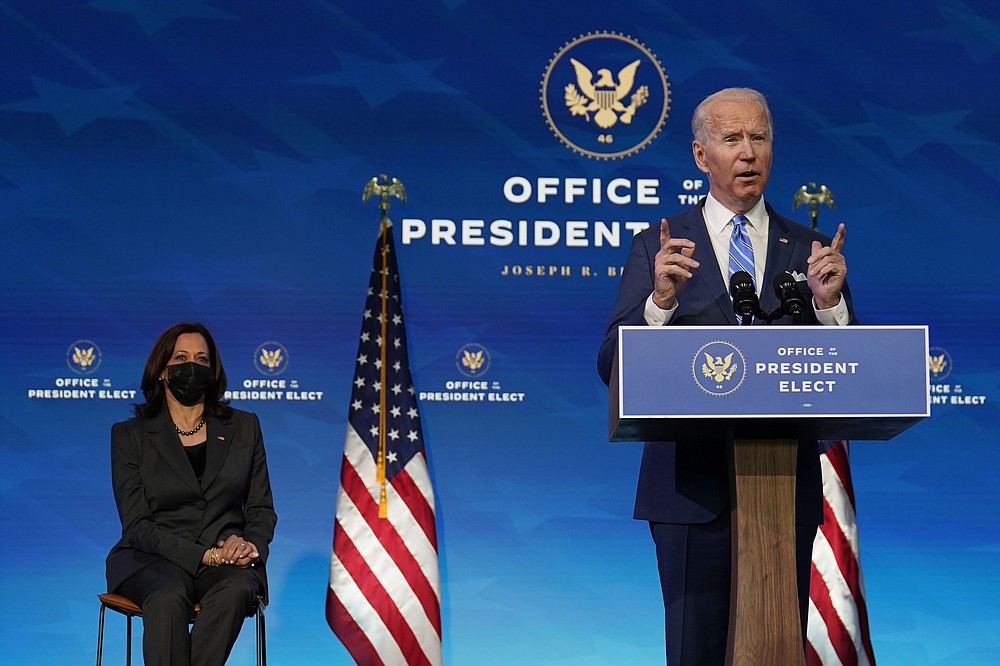 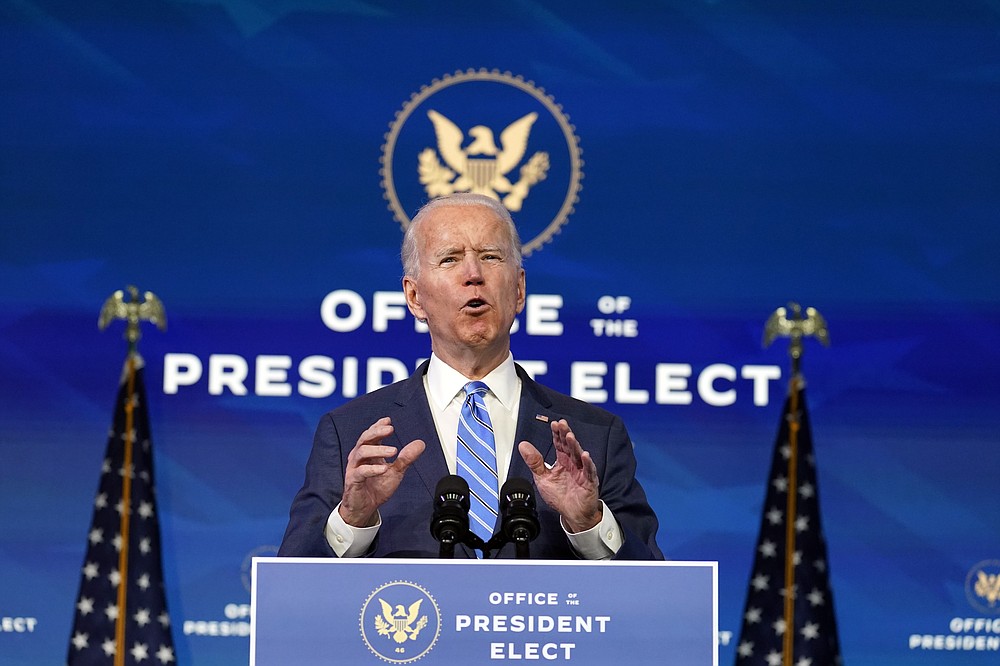