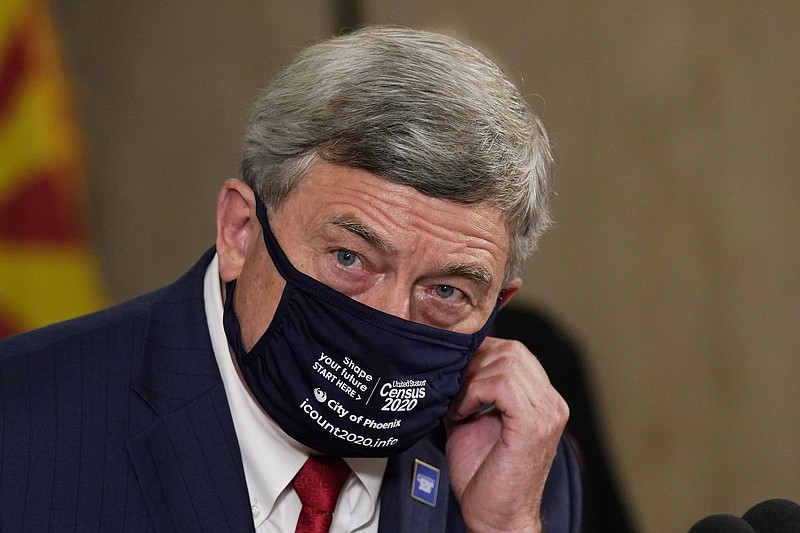 U.S. Census Director Steven Dillingham pauses as he listens to a question at a census news conference to urge Arizonans to participate in the nation's once-a-decade census population count Thursday, Sept. 17, 2020, in Phoenix. Ending the 2020 census at the end of September instead of the end of October, could cost Florida and Montana congressional seats and result in Texas, Florida, Arizona, Georgia, and North Carolina losing $500 million in federal funding for healthcare for its neediest residents. (AP Photo/Ross D. Franklin, Pool)

President Donald Trump's effort to exclude people in the U.S. illegally from being counted in the process for divvying up congressional seats was dealt another blow Wednesday when the Census Bureau's director indefinitely halted an effort to gather data on the citizenship status of every U.S. resident.

Bureau workers laboring to comply with the Trump order were instructed to "'stand down' and discontinue their data reviews," Census Bureau Director Steven Dillingham said in a memo.

A review indicated problems with the data that would require additional work, Dillingham said.

Dillingham's memo came after the Office of Inspector General reported Tuesday that bureau workers were under significant pressure from two Trump political appointees, Nathaniel Cogley and Benjamin Overholt, to figure out who is in the U.S illegally, using federal and state administrative records.

Bureau statisticians worried that any citizenship figures they were forced to produce would be incomplete, misinterpreted and tarnish the statistical agency's reputation, the inspector general said in a memo.

Dillingham had set a deadline of today for bureau statisticians to provide him a technical report on the effort, the inspector general's memo said, though Dillingham said in a response that the request had come from another bureau official.

Trump two years ago ordered the Census Bureau to use administrative records to figure out who is in the country illegally after the Supreme Court blocked his administration's effort to put a citizenship question on the 2020 census questionnaire.

Information about citizenship status could be used to implement another Trump order seeking to exclude people in the country illegally from the count used for divvying up congressional seats and Electoral College votes, as well as the annual distribution of $1.5 trillion in federal spending, among the states.

An influential GOP adviser had advocated excluding them from the apportionment process in order to favor Republicans and non-Hispanic whites. Trump's order on apportionment was challenged in more than a half-dozen lawsuits across the U.S., but the Supreme Court ruled last month that any challenge was premature.

The ability to implement Trump's apportionment order is in jeopardy since the processing of the data is not scheduled to be done until early March because irregularities discovered during the numbers-crunching phase of the 2020 census need to be fixed, Trump administration attorneys said Monday.

That revised deadline dealt another blow to the apportionment order because it is weeks after Trump leaves office and President-elect Joe Biden is sworn in next week. Biden has said he opposes the effort, and Dale Ho, director of the ACLU's Voting Rights Project, which had challenged the apportionment order, urged Biden on Wednesday to rescind it when he takes office.

"President Trump tried and failed throughout his entire presidency to weaponize the census for his attacks on immigrant communities," Ho said. "It appears he has failed yet again."

After the release of the inspector general's memo, a coalition of civil rights groups called for Dillingham's resignation, saying he was undermining the statistical agency's standards for data quality to comply with Trump's order, which was "motivated by partisan objectives."

"We do not lightly come to the conclusion that he should resign," leaders of the National Association of Latino Elected and Appointed Officials, Asian Americans Advancing Justice and The Leadership Conference on Civil and Human Rights said in a statement Wednesday, before the director announced the halt to the citizenship effort. "Dillingham's order to divert precious staff time away from producing the apportionment count and into producing data on citizens and noncitizens for political, partisan purposes is a betrayal of the mission of the Bureau."

Census Bureau directors have five-year terms, and Dillingham's tenure isn't done until the end of the year. 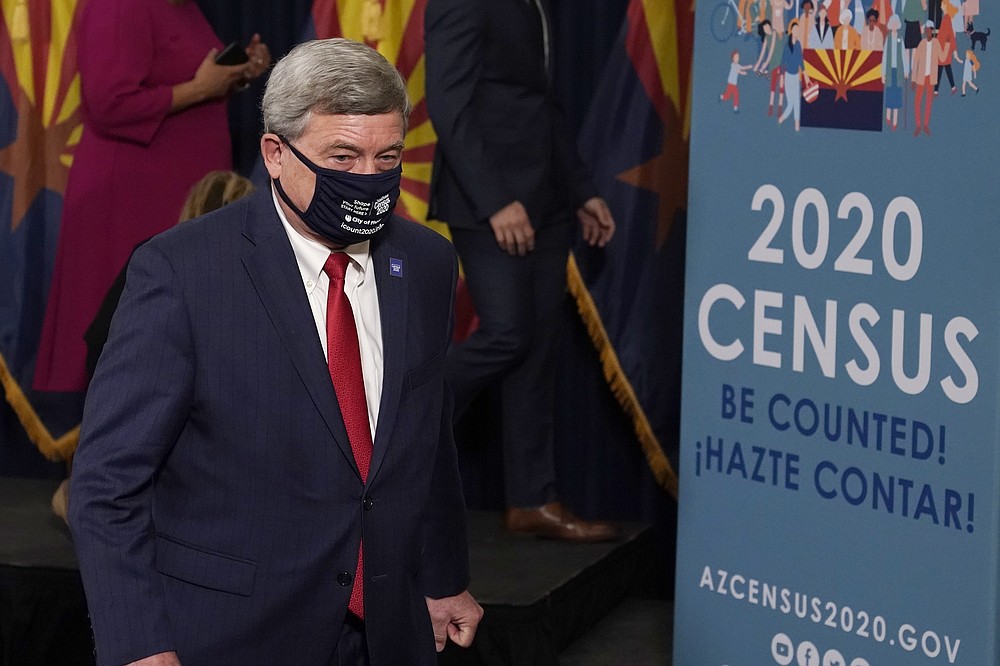 U.S. Census Director Steven Dillingham departs a census news conference to urge Arizonans to participate in the nation's once-a-decade population count Thursday, Sept. 17, 2020, in Phoenix. Ending the 2020 census at the end of September instead of the end of October, could cost Florida and Montana congressional seats and result in Texas, Florida, Arizona, Georgia, and North Carolina losing $500 million in federal funding for healthcare for its neediest residents. (AP Photo/Ross D. Franklin, Pool)
ADVERTISEMENT