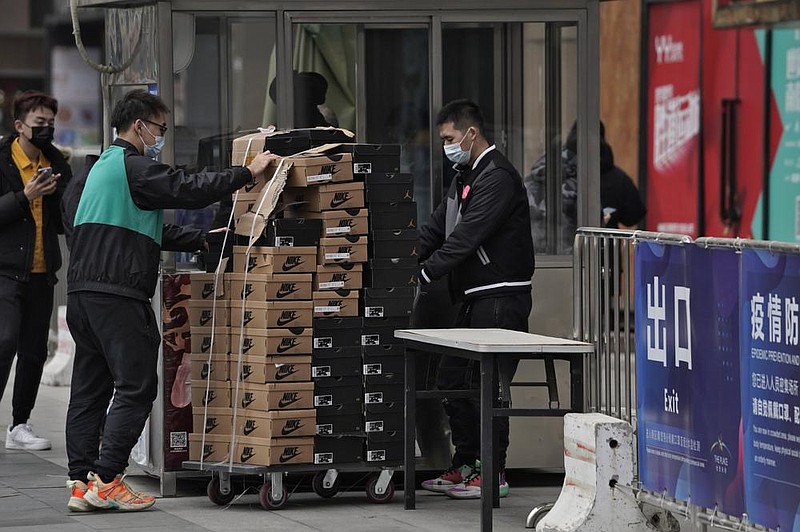 Workers push a cart loaded with shoes made by Nike past a security post Thursday at a shopping mall in Beijing. China’s exports rose in 2020 despite pressure from the coronavirus pandemic and a tariff war with the United States. (AP/Andy Wong)

BEIJING -- China's exports rose in 2020 despite pressure from the coronavirus and a tariff war with Washington, boosting its politically volatile trade surplus to $535 billion, one of the highest ever reported.

Exports increased 3.6% over 2019 to $2.6 trillion, an improvement on the previous year's 0.5% gain, customs data showed Thursday. Imports edged down 1.1% to just over $2 trillion, but growth was strong in the second half after China became the first major economy to revive following the pandemic.

Exports to the United States rose 7.9% over 2019 to $45.2 billion despite tariff hikes on most Chinese goods by the Trump administration in a feud with Beijing over technology and security. Imports of U.S. goods rose 9.8% to $13.5 billion, boosted by Beijing's promise as part of a truce in that conflict to buy more American soybeans, natural gas and other exports.

China's exporters benefited from the relatively early reopening of its economy and demand for masks and other Chinese-made medical supplies.

Exporters have taken market share from foreign competitors that still face virus curbs, but that advantage is expected to fade as vaccines are rolled out and other economies return to normal. Demand for medical goods also is receding.

"The current strength of exports is unlikely to be sustained indefinitely," Julian Evans-Pritchard of Capital Economics said in a report. He said imports "are likely to drop back" as the government reduces high spending and other support for economic activity.

December exports to the United States were $4.6 billion. Imports of American goods were $1.6 billion, giving China a $3 billion surplus.

"In 2020, China made outstanding achievements in foreign trade, which did not come easy," said a statement by the General Administration of Customs of China. It warned against complacency, saying the global economic situation "is still grave and complex."

The election of Joe Biden to succeed President Donald Trump has raised questions about the future of the U.S. fight with Beijing. Economists and political analysts expect few changes because of widespread frustration in Washington with China's record on trade and human rights and complaints about technology theft and spying.

Beijing promised to buy more American exports in the Phase 1 trade agreement a year ago aimed at ending the tariff war. The two governments agreed to postpone further tariff increases on each other's goods, but penalties on billions of dollars of imports remain.

China fell behind on meeting those commitments but started to catch up as demand rebounded.

China is on track to be the only major economy to grow in 2020 while activity in the United States, Europe and Japan falls.

The world's second-largest economy shrank by 6.8% from a year earlier in the first three months of 2020. Growth rebounded to 3.2% in the second quarter and accelerated to 4.9% in the three months ending in September.

Chinese imports are growing faster by volume than by value because prices of oil and other commodities sank after virus curbs on travel and business depressed global demand.

Also in 2020, exports to Europe rose 6.7% to $39.1 billion despite virus controls that shut down travel and business in major markets. Imports of European goods rose 2.3%, giving China a surplus of $13.3 billion. 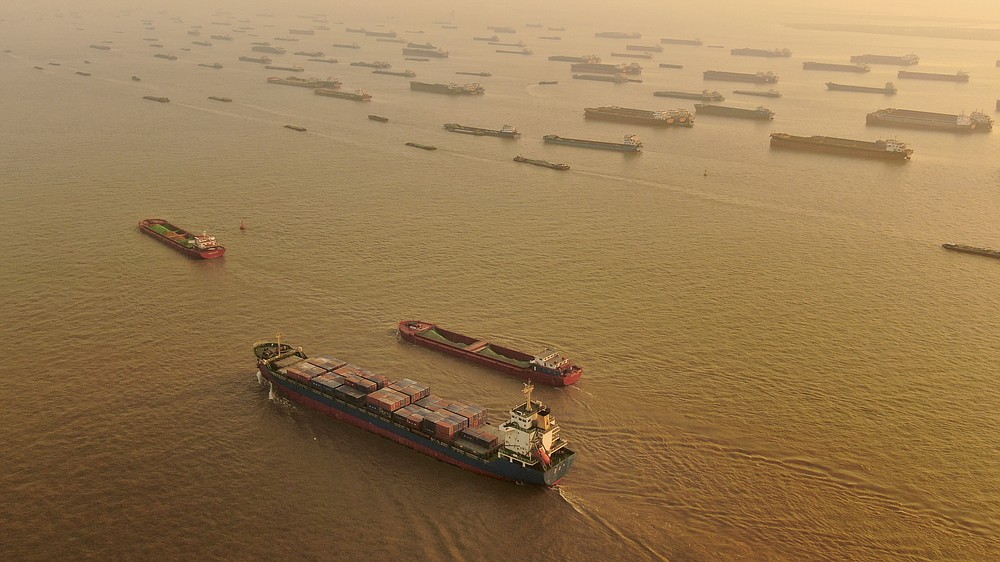 A cargo ship sails along the Yangtze River as seen from an aerial photo in Nantong in eastern China's Jiangsu Province, Jan. 2, 2021. China's exports rose in 2020 despite pressure from the coronavirus pandemic and a tariff war with Washington, boosting its politically volatile trade surplus to $535 billion, one of the highest ever reported. (Chinatopix via AP)
ADVERTISEMENT