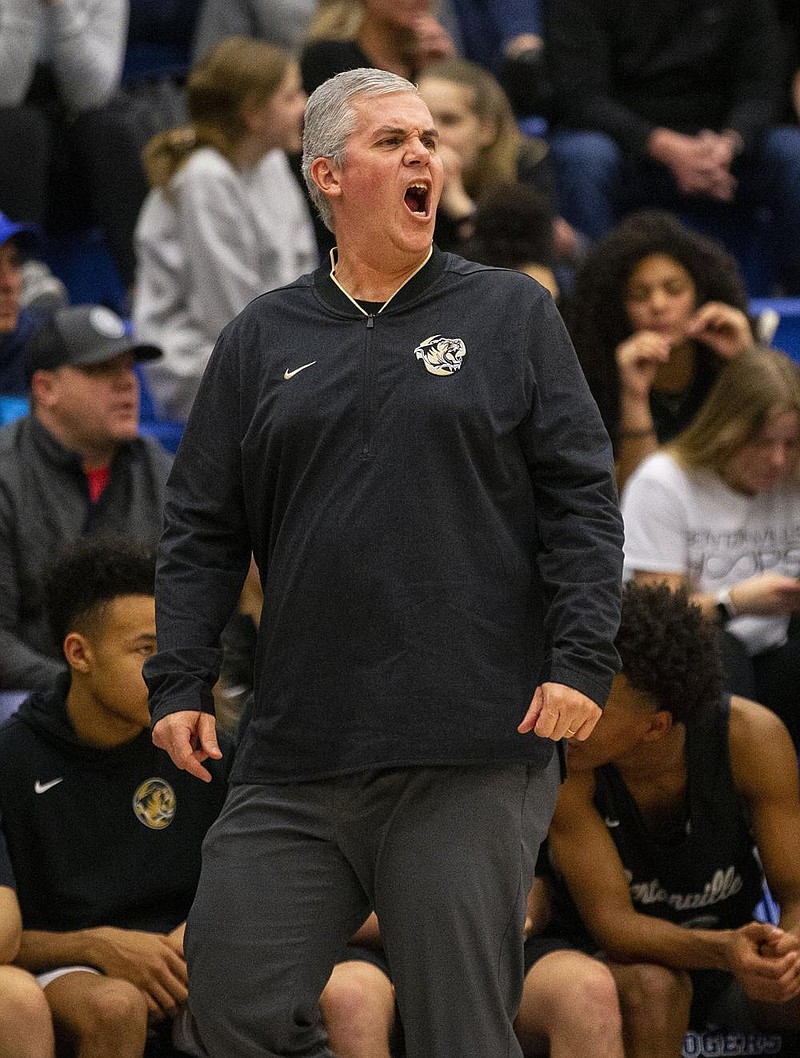 Sole possession of first place in the 6A-West Conference standings will be on the line tonight when Bentonville (9-1, 3-0) and Fayetteville (12-2, 3-0) tangle inside Tiger Arena.

“Any time Bentonville and Fayetteville get together, it’s important,” Bentonville coach Dick Rippee said. “It’s a good rivalry, and that’s nice to have. When we hook it up, we know we have to have the mindset that we are in the middle of a good conference race.

“I’m pleased our kids are getting the opportunity to play this game because there are no guarantees when it comes to the next one. We’re blessed to have some sense of normalcy in this conference because I have a lot of friends who right now aren’t able to coach and their players aren’t able to play. We’re getting that opportunity.”

Rippee said Fayetteville should be considered the conference favorite despite losing the trio of Isaiah Releford, Alonzo Releford and Taumary Releford from last year’s team. The Bulldogs, behind the guard duo of Corey Williams Jr. and Landon Glasper have won their conference games by an average of 23 points per game.

“If you have any plans of winning a conference championship, you better be able to compete with Fayetteville,” Rippee said. “(Fayetteville coach) Brad (Stamps) does a great job, and their guard play is good.

“I think Corey has become a better all-around player and is now starting to do some good things on his own. The Glasper kid is as good as they come, and that number 20 (Mathew Wayman) has really been impressive this year and shot the ball well.”

Bentonville, however, has been just as impressive thanks to its experienced players and has won its conference games by an average of 23.7 points. The Tigers have found different ways to hurt teams with a variety of players such as Harrison Hicks, Jaylen Lee, Abel Hutchinson and Hayden Shanks.

“The kids all understand what we are trying to do offensively,” Rippee said. “But this is probably the best defensive team I’ve had here. We have a long, athletic guy in the middle who can alter shots, and Abel is 6-4 and can guard anybody from one to five.

“Shanks is 6-2 and will guard the opposing team’s best perimeter shooter, and Harrison is stronger and a much better defender. We have five good ones out there, and when we can bring some good players off the bench.”

Pea Ridge coach Heath Neal said each win his team gets in 4A-1 Conference play is important because it helps the Lady Blackhawks set themselves in a better position once postseason play arrives.

That includes a crucial 58-57 decision Tuesday night at Farmington as Blakelee Winn hit the decisive free throw in the closing seconds.

“The 4A-1 Conference is just stupid good,” Neal said. “You have to compete at a high level every night in order to be at the level you want to be, and I was proud of what the girls were able to accomplish at Farmington.

“There are five really good teams when you consider Farmington, Shiloh Christian, Harrison, Gravette and us. Then you have a team like Gentry that can be dangerous with Toby Tevebaugh as coach. Berryville was in the state championship not too long ago, and Kevin Froud has been there before with Prairie Grove. Everybody is jockeying for position each and every night.”

Pea Ridge appeared to be in control with a 39-27 halftime lead and a 44-35 cushion going into the fourth quarter. Farmington, however, rallied behind senior Tori Kersey, who scored 17 of her 40 points in the final 8 minutes and helped the Lady Cardinals tie the game before Winn’s clutch free throw.

“Tori Kersey put her team on her shoulders,” Neal said. “We’ll have to fix some things defensively before we play Farmington again, but we knew they were never going to stop fighting.”

The return of senior point guard Ethan Gregory has led to a huge turnaround for Mountainburg (12-3, 4-1), which won nine games last season.

Gregory missed his junior year in basketball after suffering a torn anterior cruciate ligament while playing football for the Dragons. But he’s back and averaging 21 points, 8 rebounds, and 6 assists per game. On Tuesday, Gregory scored 29 points in a 64-53 victory over Mansfield.

“(Gregory) can score and he’s a willing passer, a good passer, who makes everyone around him better,” Mountainburg coach Michael McDonald said. “We made the state tournament when he was a sophomore. We’ve been able to score and getting Ethan back as our point guard is a big part of that.”

Waylon Cluck contributes 14 points per game for Mountainburg, which has lost twice in overtime to Pea Ridge and West Fork and by one point to Lavaca. Tuesday’s win over Mansfield sets up a showdown at home tonight with Acorn (13-2, 5-0), which is undefeated in 2A-4 Conference play. Acorn beat Lavaca 61-59 Tuesday behind 28 points from junior Damian Bphlman.

“If we win, there’ll be a three-way tie between us, Acorn, and Lavaca halfway through conference play,” McDonald said. “So, it’s a big game for sure.”

Ozark didn’t let the disappointment of losing a close game to Morrilton turn into another loss on Tuesday.

Ozark beat Clarksville 53-42 after losing 38-36 to Morrilton in a showdown between top teams in the 4A-4 Conference. Ozark got the rebound late in the game after an intentional miss at the free-throw line, but the shot did not fall.

Morrilton remains unbeaten in conference play, but Ozark (11-4, 2-1) will likely continue to challenge despite the presence of only one senior, Kelsee Barnett, on the roster. Three juniors and a sophomore fill out the starting lineup for the Lady Hillbillies, who play tonight at Dardanelle.

“We’re fairly young, but our expectations are always high,” Ozark coach Bret Nagel said. “We’re still making a few mistakes but, if we clean those up, we’ll have more success.”

Ferrell closing in on win milestone

David Ferrell can join a select club with two more basketball wins this season. The New School boys basketball coach is two wins away from reaching the 600 career-win mark.

Ferrell is 598-216 in his career and can hit the 600-win plateau with victories against Ozark Catholic Academy and the Thaden School. The Cougars (23-3, 5-1) will host OCA today and Thaden on Tuesday in 1A-1 West Conference action.

“Other than being old and just coaching a lot of years, I’ve been unbelievably blessed through the years,” Ferrell said. “I’ve been blessed to have a lot of good players and I’ve worked at schools that really supported our program and had players buy into the program. Just real fortunate to have good players. You can’t win games without good players.”

The 598 wins are senior boys-only wins, primarily at West Fork. Ferrell spent several years as the men’s basketball coach at the University of the Ozarks.

This season the Cougars have posted a sparkling record while starting four sophomores. Holden Blankenship is the only senior starter. Two of the sophomores — Macheal Hardiman and Will Sturner — played in the senior high team last season, but the other two are first-year senior high players.

The Cougars have played 26 games this season even with covid-19 spikes in NWA.

“We’re going to get every game in,” Ferrell said. “We can play 34 games this year and we’re on track to get them all in. We lost one game, but we were able to add it back in. Knock on wood, but we haven’t been affected by it.”

1A Greers Ferry West Side