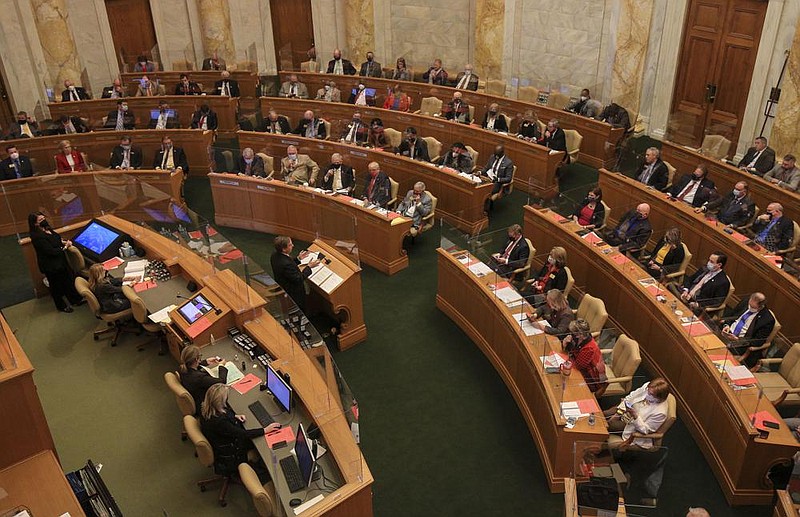 Gov. Asa Hutchinson said Thursday he supports the creation of needs-based scholarship program in this regular legislative session and he asked school district superintendents to back this initiative.

The Arkansas Academic Challenge Scholarship program, financed by the state lottery, "is for everyone regardless of need," the Republican governor said during the Arkansas Association of Educational Administrators' superintendents symposium in Little Rock.

Proponents of Act 1105 said it would provide an incentive for students to successfully complete their early years of college and help guard against the scholarship program running short of funds. Critics said it would hurt poor and minority-group students.

The scholarship is financed with lottery's proceeds plus $20 million a year in general revenue.

Hutchinson said Thursday that "because we have a surplus, an additional amount that is coming in every year for scholarships, and because we tightened the requirements some, we have an amount that we can designate toward a needs-based portion of our lottery scholarship."

Afterward, Hutchinson spokeswoman Katie Beck said the proposed Academic Challenge Plus needs-based awards would be granted in increments of $1,000 with a maximum of $4,000 per academic year, for a total scholarship maximum of $5,000 per year.

Afterward, Eads said in an interview that he hopes to file the bill soon.

"So, if we were already qualified for $1,000, then you get up to $4,000 additional that first year," he said. "Hopefully, it is to help those that run into that impediment of [affording] those first years" before the size of the Academic Challenge Scholarships increases in their later years in college.

Eads said his legislation would require the Challenge Plus Scholarships to be funded after the Academic Challenge Scholarships are financed, and "based on a year in arrears."