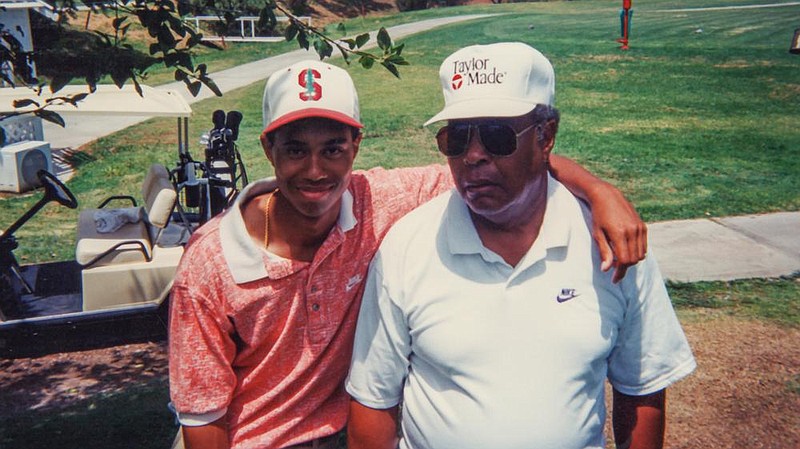 The young Tiger Woods and his father, Earl, circa 1995, are seen in a photo used in part one of the HBO documentary “Tiger.”

It's fascinating. I'm impressed by how well it's made and the quality of the insight some of the interviewees provide. I love rewatching some of the golf shots Woods made and re-experiencing the tournaments he won. I didn't think there was that much about Tiger Woods that could surprise me.

On the other hand, it feels icky. It can't be good for us to be so interested in the private lives of public people, even those who admittedly hold themselves out as paragons and role models.

We should probably assume everyone is hypocritical. People do things for reasons other than the ones they offer for public consumption. We all tell ourselves and others little lies to lubricate difficult social situations. We all rationalize and virtue signal -- we all tend to assign the best possible motivations to our actions.

Only fools tell the truth all the time.

Part of the contract of celebrity is that people will be curious about the celebrity's private life. We want to see how the famous and notorious comport themselves off-camera, where they live and what they drink and with whom they canoodle. There are entertainment reporters who consider it their job to provide as complete a picture of the banality of celebrity life as possible because the celebrity -- in the spotlight for the moment, by dint of talent or luck or misfortune -- somehow signed up for such scrutiny by daring to raise their head above the parapet.

We shouldn't care about gossip. But I'm watching "Tiger" on HBO.

And, if still allowed to virtue signal after that preamble, I am so sad for him.

Because, like most of us, he has gone through some hard things in his life. Yes, he has been richly rewarded and has treated people badly and disappointed those who love him, but none of that should be any of our business. We know too much about Tiger Woods, despite the craft by which this particular narrative was woven together. It's an excellent documentary -- teasing out some big questions about how we are ever to live in a world where everything we love will eventually be taken from us.

But we shouldn't care so much about who Tiger Woods slept with. We should understand that there is no correlation between being talented and being morally upright or decent. As S.L. Price once wrote, "your hero is not a nice guy."

Though maybe he is; Stan Musial was allegedly pretty nice. There are a few famous people who seem well-adjusted, happy and generous of spirit.

Maybe the problem is that all human beings are inherently interesting, and were we to delve into any individual life we would find contradictions and complications. Every human has a story that might be profitably dramatized. Maybe accepting the perks of fame means a tightening of the sphere of privacy we should all enjoy.

You get to be rich and famous; we get to dig through your trash and enjoy it when you do something stupid. We get to invest emotionally in your success and offended by your failures. We get to hate you when your character does something that conflicts with our idea of how your character ought to behave. We get to have para-social relationships with you.

Most of the time we're more messed up than whatever famous person invites our fascination or wrath. The fault is less with the stars than with ourselves.

Ramin Bahrani's "The White Tiger" opens theatrically today. I haven't read Piers Marchant's review of it yet. But my opinion is that it's terrific.

I've been a fan of Bahrani since his debut feature, 2005's "Man Push Cart" (watching his 2008 film "Goodbye Solo" is one of my signature memories of the Little Rock Film Festival) and though he has moved in a more commercially accessible direction with 2015's "99 Homes" and a version of "Fahrenheit 451" made for HBO in 2018, he's still a filmmaker comfortable with emotional dissonance and tough ideas. This is one of the best films of the year -- though for Oscar purposes it counts as a 2020 movie, which means it's eligible for consideration at the 2021 awards to be held in April.

Also, we have "The Marksman," the latest in a seemingly never-ending line of Liam Neeson entertainment products. With Neeson, you can always count on a certain quality, even if the film itself is pretty generic.

And I'm about to screen Sam Pollard's documentary,"MLK/FBI" about the U.S. government's campaign against the civil rights leader. I've heard good things about this chronicle of American darkness.