A balm for the soul

Joe Biden’s Catholicism is all about healing. Now, he will lead a suffering America. by MICHELLE BOORSTEIN THE WASHINGTON POST | January 16, 2021 at 3:16 a.m. 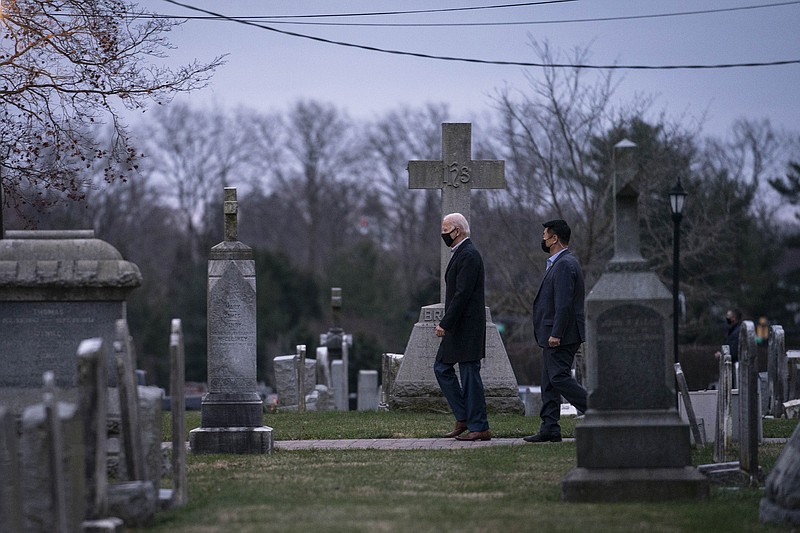 WASHINGTON -- Pitching himself as president, Joe Biden promised to heal America's hurting soul. His experiences with suffering and healing were well known, including the deaths of his wife and two of his children, his struggle against stuttering and many political losses. On a bigger stage than ever, Biden was trying to show the country how he did it.

Through his Catholic faith.

"For me, faith, it's all about hope and purpose and strength," Biden said in a February video ad. "Faith sees best in the dark."

"Weeping may endure for the night, but joy cometh in the morning," he quoted from the Book of Psalms in October.

Now, Biden will lead a nation deeply in need of healing -- with soaring coronavirus cases, thousands dying daily and millions out of work and hunkered down in isolation. But he is facing not one America but two, each claiming that God and righteousness are on its side.

As divided as any are Biden's own people, U.S. Catholics, with millions who don't even see him as a legitimate Catholic at all, because of his support for abortion access and LGBT equality.

The question is: Can Biden heal today's America?

Catholicism and its structures -- its poetry, humor, teachings, rituals -- have always been how Joseph Robinette Biden Jr. has understood healing, others and himself.

"Catholicism and family provide the substructure of his life... . That's his whole conception of how society works," said Evan Osnos, a writer for the New Yorker who recently published a book on Biden and his 2020 run for president. "It's more personal than political. That's what separates him from 2021 in Washington, D.C., where there are few ways in which religion is not part of politics. Biden doesn't go out of his way to make it that."

"I think he'll try very hard like he always does at everything to bring people together and build bridges," said Sen. Bob Casey, a Pennsylvania Democrat who grew up in the same Catholic community of Scranton as Biden. "He'll have more patience than I would have."

Millions of Americans hungry for a faith focused on healing and inclusion will embrace it; millions of others will reject Biden's version of religiosity, one that's less tied to doctrine, less likely to honor religious conservatives' legal demands, less invested in America as a Christian nation.

But what makes Biden different, says Villanova University theologian Massimo Faggioli -- whose spiritual biography of the president-elect is being published this month -- is that he's unapologetic.

"Joe Biden is a Catholic in the public square who doesn't take lectures from bishops about what being Catholic is about. This is totally new," Faggioli said.

His desire to be a uniter will be tested quickly on the religious front. On Jan. 29, nine days after Biden's inauguration, perhaps the largest annual gathering of U.S. Catholics will take place blocks from the White House: the March for Life, where tens of thousands of mostly Catholic abortion opponents rally. In 2020, Trump became the first U.S. president to speak live at the march. This year, it will undoubtedly feature many speakers and signs challenging Biden's faith.

But Biden has long pushed back on the idea that, for him, faith must lead to policies.

"I'm prepared to accept doctrine on a whole range of issues as a Catholic. ... I'm prepared to accept as a matter of faith -- my wife and I, my family -- the issue of abortion. But what I'm not prepared to do is impose a rigid view, a precise view ... that is born out of my faith, on other people who are equally God-fearing, equally as committed to life," Biden told the Jesuit magazine America in a 2015 videotaped interview.

Yet Biden has bound up his promises to make significant social change in areas from health care to the environment with that to "restore the soul of the nation." If he is a healer, Biden has an epic pastoral challenge.

HIS FAMILY, HIS ERA

The shaping of Biden's religiosity stems from two sources -- his family and his era.

He was raised in working-class, Irish-Catholic communities, where faith routines and Catholic institutions such as schools and parishes were everything. When Biden talks about his Catholic upbringing, he usually repeats the word "dignity" multiple times. The dignity of work. The dignity of the poor.

"My father would say, 'The cardinal sin of all sins is the abuse of power,'" Biden told America editor Matt Malone in the 2015 interview. "Whether it's a man raising his hand to a woman, whether it's economic power being evoked and asserted over someone else, whether it is the government abusing its power. And that's how I look at what this is all about."

Biden was a young adult during the Second Vatican Council in 1962-65, when Catholicism was deliberately opening to the world -- with new languages for prayer and new relations with other faiths, among many other changes.

"He's a Catholic born in that period when Catholicism was exiting the Catholic ghetto. It's the end of the subculture," Faggioli said. He grew up with "a Catholicism that no longer exists."

Biden thought about becoming a priest when he was 12, during an era when most Irish American Catholic youth saw priests and nuns as heroes. He raised the idea again to his mother in high school, and then to the Delaware bishop in the 1970s, after his wife and daughter died.

Aside from politics, the priesthood "was the only other thing I ever thought about," Biden told journalist Jules Witcover for Witcover's 2010 biography of the then-vice president. Each time it was more of a concept than a serious pursuit. "Girls got in the way," Biden said with a laugh.

The role of Biden's Catholicism -- prayer, as well as Catholic teachings about the role and purpose of suffering -- in helping him survive the deaths of his young wife and daughter in the 1970s and then his son Beau, of brain cancer in 2015, is well known. He often uses the words "solace" and "comfort" when asked about the role of his faith. He is quick to talk with others who are pained by loss or struggle.

The Rev. Leo O'Donovan, a former Georgetown University president, described to the National Catholic Reporter the moment when Biden asked him to lead the funeral Mass for Beau.

"The priest's first words to Biden were, 'Joe, I am so sorry,' before he himself erupted into tears," according to the publication. "He began to comfort me... . He became the pastor there," O'Donovan told the publication.

As strong as Biden's attachment is to Catholic beliefs and culture, his idea of religiosity is pluralistic.

Rabbi Michael Beals, a Delaware cleric whom Biden calls "my rabbi," met Biden 14 years ago when the then-senator came without fanfare to sit shiva -- a visit to relatives of the dead during the week-long period of Jewish mourning -- for a longtime, small-amount donor. Then, six years ago, at a party at the vice-presidential mansion for the Jewish High Holidays, Beals offered to bless Biden.

"He bowed his head the way a Jew never would. I put my palms on his forehead, like I would for my children, and it was such a moment. He really has a sense for respect for religion, religious leaders, deep faith. And his faith isn't a designer label. He is a Catholic but he treated me no differently than he would have a priest," Beals said, noting that Biden has his own black yarmulke.

Some Catholics worry -- or hope, depending on their perspective -- that Biden could influence the U.S. church.

"What's happened with Catholics is, we got subsumed by [white] evangelicals because of the political interests," said Anthea Butler, a religion professor at the University of Pennsylvania who sat on Biden's Catholic advisory groups. "But the ways in which he's speaking about the poor -- this is straight-up Catholic social teaching, and you can't get away from that." 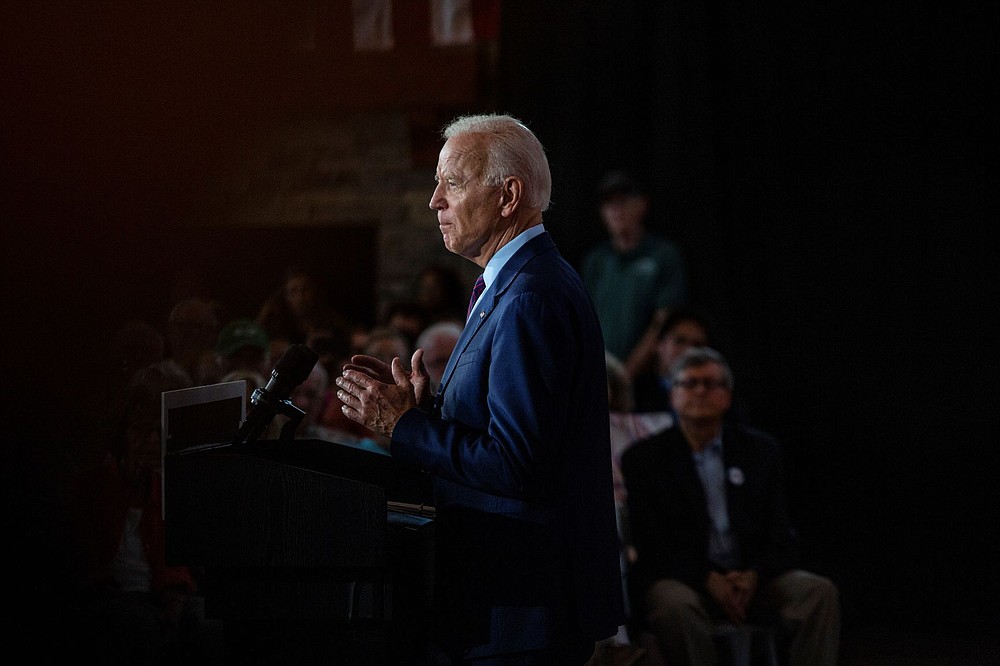