Even online sales suffered a decrease by Compiled by Democrat-Gazette Staff From Wire Reports | January 16, 2021 at 4:30 a.m. 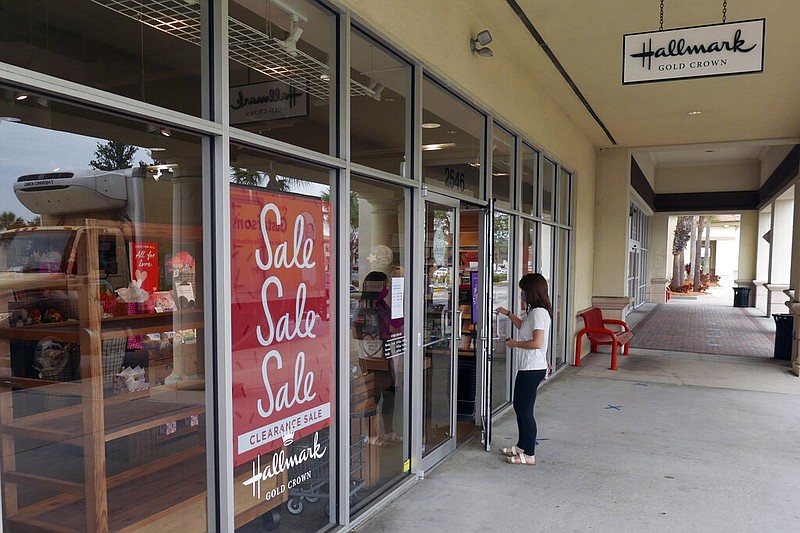 A sale sign is displayed near the entrance of a Hallmark store in Orlando, Fla., on Tuesday, Jan. 12, 2021. Retail sales fell for a third straight month as a surge in virus cases kept people away from stores and restaurants during the holiday shopping season.

Consumer spending fell for the third-consecutive month in December, confirming what many economists had predicted would be a disappointing holiday season for many retailers and restaurants.

For the second-straight month, the drop was worse than what most economists had predicted, showing that the deterioration of the broader economy in the final quarter of 2020 was deeper than expected.

"In one line: grim," is how Ian Shepherdson, chief economist at Pantheon Macroeconomics, described December's retail sales in a research note Friday.

"We think that fear of the third covid wave, and the restrictions imposed across much of the country to suppress it, did most of the damage to retail sales in the past two months," he added.

The drop was widespread across many categories, including electronics, autos, and food and beverage stores, which had been areas of strong spending in the spring and summer, but declined toward the end of last year. At restaurants and bars, sales fell 4.5% in December as states restricted in-person dining, ending the year down 21%.

The Commerce Department said sales even fell online, down nearly 6% while rising 19% for the year.

That may be because of Amazon, which held its annual Prime Day sales event in October for the first time, which likely pushed people to shop earlier in the season and spend less in December, analysts at Wells Fargo Securities said. Walmart, Target and Best Buy followed Amazon's lead, offering competing discounts to coincide with Prime Day.

It wasn't all bad news: Sales at home improvement stores continued to rise, up 0.9% last month and 17% for the year, as people spruced up their houses as they quarantined. But the biggest increase was at gas stations, likely because of a rise in gas prices and holiday-related road trips, which pushed sales up 6.6% although they fell 12% for the year.

[Video not showing up above? Click here to watch » https://www.youtube.com/watch?v=-OX9P9toawE]

The unexpected decline underscores the economy's troubles as the pandemic has worsened this winter. Employers shed jobs last month for the first time since April. And layoffs appear to be continuing, as the number of people seeking jobless benefits jumped last week to the highest level since August.

The weakening consumer spending, which comprises 70% of the U.S. economy, adds new urgency to the $1.9 trillion economic rescue package that President-elect Joe Biden proposed this week, which would increase direct payments to individuals by $1,400.

"This likely is the nadir for retail sales, as the late December stimulus and the pending stimulus under the Biden administration will boost both bank accounts and consumers' spirits," Robert Frick, corporate economist at Navy Federal Credit Union, said in a statement.

But other economists said Americans were more likely to save their stimulus money than to spend it over the next few months, especially as businesses remain closed.

Friday's report covers only about a third of overall consumer spending. Services such as haircuts and hotel stays, which have also been badly hurt by the pandemic, are not included.

The National Retail Federation looked for the bright spots in the Commerce Department report, highlighting that holiday shopping was higher this year than in 2019, with sales growing 8.3%.

"Faced with rising transmission of the virus, state restrictions on retailers and heightened political and economic uncertainty, consumers chose to spend on gifts that lifted the spirits of their families and friends and provided a sense of normalcy given the challenging year," Mathew Shay, president of the federation, said in a statement.

But there is evidence that an ever-increasing number of those sales are going to giant retailers that have been able to use their scale and digital capabilities to grab larger market share during the pandemic.

One such retailer, Target, said Wednesday that its sales in November and December were up 17.2% from the same time the previous year, a rise driven by both in-store and online shopping. Target's digital sales were the biggest area of growth, more than doubling from the 2019 holiday season. The vast majority of those deliveries were made from Target stores.

Overall, online shopping was up 32% to $188 billion during the 2020 holidays compared with the previous year. But the weakness in the December retail sales figures shows that, despite the rise in e-commerce, the bulk of consumer spending -- like food, auto sales and dining -- still takes place in physical settings that remain restricted because of the pandemic.

That reality, Shepherdson said, means that even with the stimulus expected to flow to consumers in the early weeks of the Biden administration, spending could remain depressed for the next several months.

"We expect consumers' spending to struggle until falling covid cases allow restrictions to be eased, starting in March," he said.

Information for this article was contributed by Michael Corkery of The New York Times; and by Joseph Pisani, Christopher Rugaber and Anne D'Innocenzio of The Associated Press.