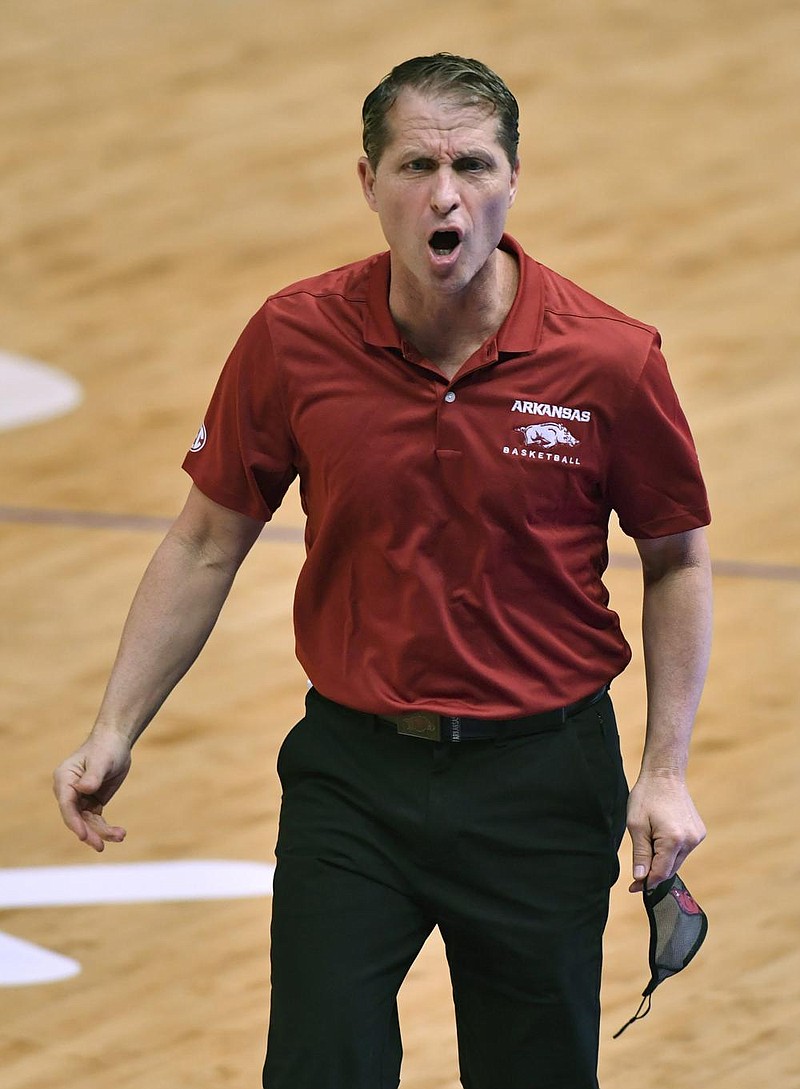 FAYETTEVILLE -- University of Arkansas Coach Eric Musselman thought long and hard about how he wanted to conduct Thursday's practice while on the plane ride back from a 92-76 loss at LSU in which the Razorbacks trailed by as many as 31 points in a rugged first half.

Should he take it light on the team after the poor performance or get tough?

Musselman, after deep thoughts on how many of his former NBA coaching brethren would have handled it, chose the latter.

"[Thursday] was as long a practice as we've had since I've been here," Musselman said, adding that an in-depth video study was part of the extended day. "We had weighted vests in many of our defensive drills and our transition drills, with the understanding we play an early game on Saturday.

Musselman said he has instincts to follow how his father, legendary coach Bill Musselman, would react, as well as NBA coaches such as Doc Rivers, Chuck Daly, Mike Fratello and Hubie Brown, and some of his former assistants such as David Fizdale and Scott Brooks.

"I think about what each of those guys would do," Musselman said. "To be honest with you, when we flew back ... I wrote down what each of them would do.

"Sometimes as a coach you have to make a decision. Are you going to go light on Thursday after playing the way we did? Or, are you going to have your most difficult practice of the year? I did not have to ask any of the assistants their opinion on what we were going to do yesterday. We went old school, and I coached practice the way my dad probably would've yesterday."

Both Arkansas and Alabama will be short-handed for today's 2:30 p.m. Central tipoff at Coleman Coliseum as the Crimson Tide defend their home court and their place atop the SEC standings with a 5-0 record.

The Razorbacks are not likely to have 6-7 forward Justin Smith, while guard JD Notae is probable after suffering a right shoulder injury Wednesday at LSU.

"Justin Smith has not played," Arkansas Coach Eric Musselman said Friday before the Razorbacks departed for Tuscaloosa, Ala. "He's tried to practice a little bit of late but has not been able to go through a full practice."

Arkansas junior Abayomi Iyiola has been out since the summer with a knee injury, and freshman Khalen Robinson is out for the season after undergoing surgery to repair a broken bone in his right foot.

"JD Notae did not practice [Thursday]," Musselman said. "I think everybody across the board is dealing with injuries for whatever reason this year."

Musselman said he hoped Notae would be available. The junior guard returned to Wednesday's game after getting his right shoulder hung up with 245-pound Darius Days.

Alabama's Herbert Jones and Jordan Bruner both went out with injuries during the Tide's 85-65 win at Kentucky on Tuesday.

Bruner is expected to miss a month or more with a right knee injury. Jones is day to day with a left wrist injury.

Alabama's Jahvon Quinerly, who has been out with an undisclosed medical condition, has a chance to play against the Hogs.

"Hopefully JQ and Herb, by next week we'll have both of them, for sure," Alabama Coach Nate Oats said. "Shoot, I don't know, maybe either one of them could possibly give us some minutes tomorrow on an as-needed basis maybe."

The Razorbacks have won three consecutive games at Alabama's Coleman Coliseum, including an 82-78 decision last season, and lead the all-time series 35-28.

Arkansas has won six in a row in the series, starting with a 93-91 win on Bobby Portis' tip-in before the overtime horn in 2015.

Arkansas trailed 12-0 in that game, in which Isaiah Joe shot 0 for 3 and went scoreless in 21 minutes with a sore knee that eventually cost him five games.

"I would say we have not defended as good as we did last year," Coach Eric Musselman said. "We're not as quick laterally across the board. Not having Justin Smith has really hurt us defensively.

"I think that when you see a player close out, and his man has the ball, and if you have a high hand up, that's what we did last year almost on every catch. I've got to continue to do a better job in getting, especially our younger guys, to follow the game plan on both sides of the ball."

The Razorbacks led the nation in three-point defense last season at 27.2%, but they were 169th in overall field goal defense (42.8%).

"You can look at the numbers," Musselman said. "We're not taking away the three like we did last year."

The Arkansas coaching staff is big on getting to the free-throw line, or as Coach Eric Musselman likes to say, the Hogs are a "high-volume free-throw attempts" team.

The Razorbacks are first in the SEC and 21st in the country with 286 free throws taken, and they're converting from the line at a good rate. Arkansas is fourth in the SEC and 59th in the nation with 74.1% free-throw shooting.

Alabama is not far off the Razorbacks with 280 attempts to rank 26th nationally, but the Crimson Tide's 68.9% shooting from the stripe is ninth in the conference and 205th in the country.

The Razorbacks' last two road games have produced bad travel stories: A long-delayed return flight from Tennessee last week and a delayed departure from Northwest Arkansas for the LSU game on Tuesday.

Arkansas left for today's road game at Alabama on Friday with fingers crossed.

"I mean, we can't have any worse travel," Eric Musselman said. "Whatever happens today, it'll be an upgrade from what has happened."