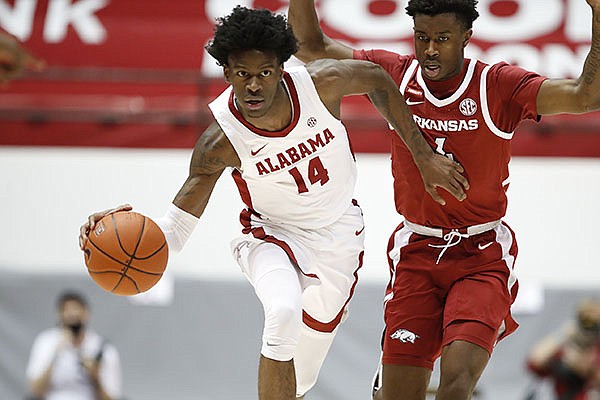 Alabama guard Keon Ellis (14) dribbles the ball up court while being defended by Arkansas guard Davonte Davis during a game Saturday, Jan. 16, 2021, in Tuscaloosa, Ala. (Photo via SEC Pool)

TUSCALOSSA, Ala. (AP) — John Petty Jr. made five 3-pointers and set an Alabama program record, and finished with 17 points as the Crimson Tide routed Arkansas 90-59 on Saturday.

Jaden Shackelford added 16 points and Herbert Jones had 13 for Alabama. Six players scored off the bench for the Tide, led by Juwan Gary's nine points.

Freshman Moses Moody scored a career-best 28 points and had nine rebounds to lead Arkansas (10-4, 2-4), which has lost four of its last five. Jalen Tate added 10 points.

Moody scored 14 of the Razorbacks' 19 points in first half. It was the lowest scoring output for Arkansas since an 18-point first half against Vanderbilt on Feb. 7, 2017. The Razorbacks shot 6 of 26 (23%) from the floor and had 12 of their 18 turnovers in the half.

The Tide are back on the road Tuesday to face LSU before hosting Mississippi State and Kentucky. Arkansas plays Auburn at home on Wednesday.

Led by John Petty and Jaden Shackelford, Alabama continued its hot play in the SEC with a blowout 90-59 win over Arkansas on Saturday.

Moses Moody scored a career-high 28 points on 10 of 25 from the floor. Jalen Tate finished with 10 points and six turnovers against three assists.

No other Razorbacks player scored more than five points.

We will have more from today's game later on WholeHogSports.com.

Moses Moody has 28 points on 10 of 25 shooting today. He is one rebound shy of a double-double.

The Razorbacks have 15 turnovers against only seven assists. Jalen Tate, who has six turnovers, has three assists, and four other players have one.

Three Crimson Tide players have six points each since halftime and two others have five. It's been a fairly balanced effort from Alabama. John Petty and Jaden Shackelford have 17 and 16 points, respectively.

Ten Alabama have scored in this game.

Moses Moody has a career-high 26 points today. He's been the only bright spot for the Razorbacks.

Alabama is 6 of 11 from deep in the second half and has assisted on eight of its 12 scores.

Jalen Tate has matched a career-high with six turnovers for the second time in four games.

Moses Moody leads the Razorbacks with 24 points on 8 of 20 from the floor. Jalen Tate has eight points.

The Razorbacks scored 16 points in the first four-plus minutes of the second half after finishing with 19 in the first half. I don't understand it.

Nevertheless, Moses Moody is having a day. He's up to 22 points on 7 of 13 shooting to go with a game-high seven rebounds. Justin Smith, Jalen Tate and Devo Davis each have scores since halftime.

Tate has five turnovers in this game. He has three games in SEC play with at least four turnovers, and two games with one turnover. It's been boom or bust in terms of his floor game in league games.

Alabama hit 3 of 5 shots in the last four-minute sequence and is keeping the Razorbacks at arm's length.

Moses Moody picking up where he left off in the first half. He knocked down a 3 from the top of the key on Arkansas' first possession then found Justin Smith for a dunk on a backdoor feed the next time down.

The assist from Moody was the Razorbacks' third of the game. Alabama called for time following the slam.

Moody is up to 17 points and seven rebounds.

Moses Moody scored 14 points and grabbed seven rebounds, but he was the Razorbacks' only source of offense in the first half.

He hit 4 of 10 shots, and the rest of the roster went 2 of 16. Jalen Tate added both scores in the lane. Tate, though, committed four of Arkansas 12 turnovers.

Justin Smith is the only other Razorback with a point. He knocked down 1 of 2 free throws in the early going and turned it over three times. There's not much reason for him to be on the floor right now.

John Petty scored 11 points to lead Alabama before the break, and Jaden Shackelford added 10 points and three assists. The Crimson Tide shot 44.1% from the floor and hit 7 of 21 attempts from 3.

Six Alabama players have at least one bucket today. Petty and Shackelford are 8 of 14 shooting.

Jalen Tate hit a runner in the lane - and probably got away with a travel - to become the first Razorback to hit a shot from the floor. It came at the 4:50 mark.

Moses Moody is doing what he can with 14 points and six rebounds. The rest of the roster is 1 of 15 from the floor. The Razorbacks are 4 of 16 inside the arc and have only pulled four 3s today.

That just doesn't seem to be Arkansas basketball. What is going on with this offense is beyond puzzling.

John Petty is leading the Tide with 11 points, and Jaden Shackelford has three assists to go with five points. Alabama is 6 of 18 from 3-point range.

Moses Moody is literally the only source of offense for the Razorbacks through 12-plus minutes. He has nine of Arkansas' 10 point. The rest of the roster is 0 of 9 shooting.

Offensively, the Razorbacks are operating aimlessly on most possessions. Jalen Tate and JD Notae, two players who have the ball in their hands a lot at the point guard spot, have six turnovers between them.

For Alabama, John Petty leads the way with eight points and Herb Jones has seven. The Tide are 4 of 14 from 3-point range. As bad as Arkansas has been offensively, there is also a similar lack of intensity on the defensive end.

Eric Musselman is going to need to make some changes offensively, and fast, or this one might get away from the Razorbacks.

The Razorbacks are actually fortunate to only be down 12. Alabama is only 3 of 10 from deep and has missed some terrific looks.

Just not a lot working for the Razorbacks offensively. They are 1 of 4 from the floor, and the one score from the field was called a goaltend. Moses Moody leads the way with four points.

Justin Smith has one point on a split at the line and one assist. Smith, Moody and Jalen Tate each have a turnover already. Arkansas committed a turnover on back-to-back possessions prior to the timeout.

Herb Jones leads Alabama with four points. The Tide are 4 of 8 shooting and 2 of 4 from deep.

The Razorbacks enter today's game in the middle of the pack in the SEC in terms of offensive and defensive efficiency, per KenPom, while leading the league in tempo (78.5 possessions per game).

Jaylin Williams ranks in the top 10 in SEC-only games in offensive and defensive rebound rate, and block rate. He is averaging 9.5 rebounds over the last two games but needs to cut down on turnovers. Williams has 10 the last three games.

Eric Musselman said on Arkansas' pregame radio show that Smith, who had ankle surgery two weeks ago yesterday, will be available today. It is obviously a boost to the Razorbacks' front court, but I don't know that we should expect him to be 100% himself in this game.

The Crimson Tide have been hit with injuries this week and will be without forward Jordan Bruner with a knee injury, but according to Cecil Hurt, a reporter for the Tuscaloosa News, guard Jahvon Quinerly is expected to play. Jones is in the starting lineup.

Jones played only eight minutes at Kentucky on Tuesday because of his injury. Quinerly has not played since Jan. 2 due to a medical condition.

Eight Crimson Tide players have made at least three 3-pointers in SEC play. Petty leads the way, shooting 13 of 27 from deep, and Primo has hit 8 of 21 looks. Petty has been one of the most efficient players in the league to this point and holds a true shooting percentage of 70.8, according to KenPom.

Alabama, leading the league in average length of offensive possession at 14.4 seconds, has five players averaging at least eight points per game. They are all expected to be available today. Shackelford leads the scoring at 13.5 per night, and Quinerly adds 3.4 assists.