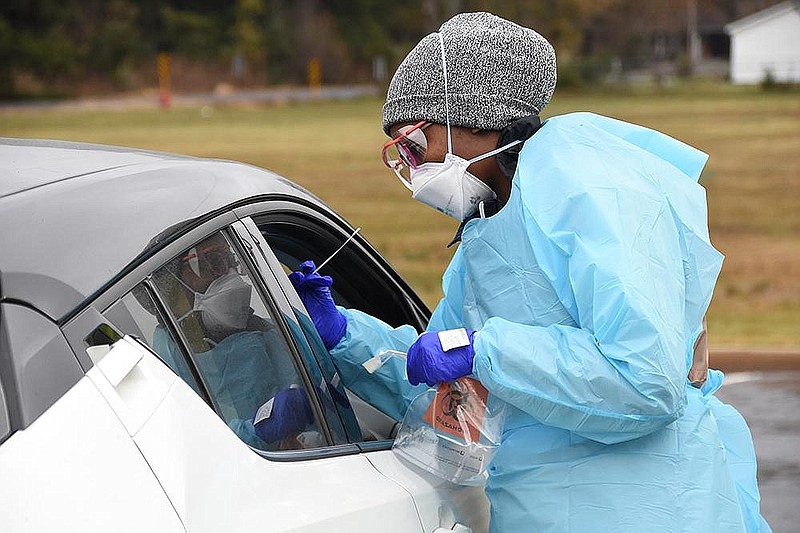 Gov. Asa Hutchinson announced Friday that he will receive his first dose of the coronavirus vaccine on Monday, the same day the shots were scheduled to become available to people age 70 and older, as well as to employees of schools and child care centers.

Meanwhile, a spokesman for St. Bernards Healthcare in Jonesboro said the system had already begun vaccinating school employees and people 70 and older after consulting with state officials.

The spokesman also said the system had vaccinated elected and appointed officials during the current phase, 1-A, of the state's vaccine plan.

The phase calls for the shots to be limited to health care workers, residents and workers at long-term care facilities and first responders.

The Batesville School District also said in a Facebook post Friday that it had received its first round of covid-19 vaccines.

The developments came as Arkansas' count of coronavirus cases rose Friday by 3,124 -- a slightly larger increase than the one on the same day the week before.

After dipping on Thursday, the number of covid-19 patients in Arkansas hospitals and intensive care units rose Friday, while the number who were on ventilators fell for the second day in a row.

The state death toll from the virus, as tracked by the Department of Health, rose by 35, to 4,263.

Hutchinson, who turned 70 on Dec. 3, will receive his shot Monday afternoon at the Health Department's headquarters in Little Rock, according to an announcement from his office.

Although people 70 and older and education employees weren't scheduled to become eligible for shots until that day, state Epidemiologist Jennifer Dillaha said the state allowed St. Bernards to start on those groups before then.

The health care system had previously received shipments that it used to vaccinate its employees, as well as other health care workers, first responders and elected and appointed officials in Craighead County.

St. Bernards "had some remaining doses that they felt would be good to use kind of as a pilot for kind of a larger scale event," Dillaha said.

She said she wasn't aware that St. Bernards had vaccinated elected and appointed officials.

St. Bernards spokesman Mitchell Nail said such officials fall under "other high priority groups" in Phase 1-A of the state's plan.

Asked if the phase includes such a category, Dillaha said, "I don't think so."

"They may have been looking at an older version of the plan," she said.

She said the state likely wouldn't take any action in response, however, especially if the health care system was "following a guidance that may have been out of date."

"Thus far we've been able to vaccinate a little more than 400 educators from this county and today we are doing individuals 70 and older, and those vaccinations are taking place as we speak," Nail said Friday.

He said the health care system was providing the vaccine to five public school districts in the county as well as Blessed Sacrament Catholic School in Jonesboro.

School employees registered for the shots. The health care system then called those who signed up to set up appointments.

He said the system also had been reaching out to patients who are 70 and older to schedule appointments.

He said the system began working on the vaccinations soon after Hutchinson on Tuesday announced the groups that would become eligible for the shots next week.

"That's when we pivoted, because we've been able to get our front-line health care workers vaccinated, we've been able to get to many of our employees here at St. Bernards vaccinated, as well as the emergency responders and local officials, and so as soon as the announcement was made, we have geared up, and we told the governor and his team that we were ready as soon as they were," Nail said.

Since the vaccinations began last month, the health care system has administered about 8,000 doses, including some second doses for people who received an initial dose of the two-shot regimen.

"[Jonesboro Public Schools] is proud of all our employees that got their first round of COVID-19 vaccinations!" the district said in the post.

"We look forward to more employees being vaccinated as soon as our district is offered more doses," it added.

Nail said St. Bernards was was providing the vaccine to the Nettleton, Westside Consolidated, Valley View and Bay school districts.

The Batesville district said in a Facebook post Friday that it had received its "first round of the COVID vaccine" through Bryant's Pharmacy in Batesville.

Health Department spokesman Gavin Lesnick said he didn't have information late Friday on how the district was able to get the vaccine early.

"Generally speaking, we do work with providers to make sure that available vaccine is used even if it means progressing in the phase distribution plan," Lesnick said.

"We have had some people who are in phase 1-B vaccinated already in Arkansas, and this is a result of working to not waste vaccine."

While more than 400,000 Arkansans are expected to become eligible for the shots on Monday, Dillaha has said she expects the state to receive only enough doses next week to provide the initial shots for about 37,125 people -- 18,600 with the Moderna vaccine and 18,525 with Pfizer's.

When the University of Arkansas for Medical Sciences began accepting appointments through a phone line for a vaccination clinic it plans to start next week, so many people called that the campus phone system crashed within about 30 minutes, spokesman Leslie Taylor said.

She said the system was overloaded for about an hour.

More than 1,000 people made appointments for their first and second doses of the Pfizer shot.

Others who couldn't get through left messages.

"We have a couple thousand voicemails to go through over the weekend," Taylor said. "We feel like a lot of those are already scheduled, but we're going to go through every one of them and make sure people get returned calls."

She said the calls came from across the state.

"They'e saying they're willing to drive here because they want their vaccines," Taylor said.

The clinic at the Freeway Medical Tower in Little Rock will be open by appointment only, starting Tuesday, from 9 a.m.-4 p.m. Monday through Friday, for people age 70 and older and employees of elementary and secondary schools, higher-education institutions and child care centers.

The university expects the clinic be able to vaccinate 315 people a day, Taylor has said.

Taylor said the university is hiring more people to take the appointments.

"Right now the folks who are doing this are people who have been working in our various clinics," Taylor said. "There's even some nurses. It's just people that know how to schedule appointments."

A spokesman for Arkansas State University said Friday that "potentially several hundred" workers could be vaccinated at an event scheduled for Tuesday at First Nations Bank Arena in Jonesboro.

Spokesman Bill Smith said the event will go forward despite an email that informed employees a cache of the vaccine unexpectedly failed to arrive.

Smith said in an email Friday afternoon that "thanks to help from [the Health Department], we are anticipating more vaccine."

In an email to employees Thursday, ASU Chancellor Kelly Damphousse wrote, "Unfortunately, we learned today that our pharmacy provider did not receive the vaccines that it ordered. This was clearly unexpected and we are still trying to figure out what happened."

A "wait list" email was sent out to some workers Thursday, while others received scheduling information for getting the shot Tuesday.

More than 1,000 ASU workers signed up for the campus vaccination program, according to Damphousse.

Health Department spokeswoman Danyelle McNeill said in an email Friday that "there won't be sufficient vaccine for larger colleges and universities to vaccinate everyone at once at this time."

Instead, colleges "will need to take a phased approach," McNeill said.

"Colleges and universities will work to prioritize who should be vaccinated first," McNeill said. Asked about student workers, McNeill said "this could potentially include student workers who are in positions that place them at higher risk of infection or exposure."

President Donald Trump's administration announced Tuesday that it would begin sending out all available doses of the vaccine, instead of holding back doses to provide the second shots of the two-dose regimen, potentially doubling the amount of vaccines going to the states each week.

But The Washington Post reported Friday that the second doses had already been shipped out and that the administration didn't have any in reserve.

Dillaha said the state hadn't been operating under the assumption that its weekly shipments would be increasing as a result of the announcement Tuesday.

"We were hoping for it, but we weren't really counting on it," she said.

She said she expects the state's allotments to remain the same for at least the next couple of weeks, until manufacturing ramps up or a third vaccine is granted an emergency authorization.

"We are staying the course and looking forward to an increase, but it may take a while," she said.

Hutchinson said earlier this month that the plan for the distribution of the vaccine in the state would be posted to the state's website by Friday.

The 70-page document was posted after 9 p.m. on the Health Department's website, healthy.arkansas.gov.

Under the vaccination effort being coordinated by the state, pharmacies, hospitals and other providers had received 275,000 doses as of Friday under Phase 1-A.

They reported having administered 119,065 of those, including some second doses for people who received their initial shots earlier.

That was an increase of 6,827 doses from the number that had been given as of a day earlier.

Walgreens and CVS were allocated an additional 49,400 doses for residents and workers at long-term-care facilities in Arkansas as part of a federal program.

Those pharmacy chains reported administering 5,091 doses as of Friday, an increase of 557 over the total as of Thursday.

The number of coronavirus cases in the state that were considered active rose by 873, to 25,613, on Friday as new cases outpaced recoveries.

But Hutchinson noted that the total number of active cases was lower than it was on the previous Friday.

"While we see nearly 1,700 fewer active cases than this time last week & continue to distribute vaccine doses across the state, we cannot relax our carefulness in fighting the spread of COVID-19," Hutchinson said in a statement.

"As we move into the first stages of Phase 1-B on Monday, we continue our march toward a healthier, safer Arkansas."

The number of virus patients who were hospitalized rose by 19, to 1,314. Those patients included 434 who were in intensive care, up from 426 a day earlier.

The cases that were added to the state's tallies Friday included 2,140 that were confirmed through polymerase chain reaction, or PCR, tests.

The other 984 were "probable" cases, which include those identified through less-sensitive antigen tests.

Among nursing-home and assisted-living facility residents, the state's count of virus deaths rose by 15, to 1,714.

Among prison and jail inmates, the Health Department's count of cases rose by 44.

Department of Corrections spokeswoman Cindy Murphy said the number of cases among inmates rose by 21, to 805, at the Varner Unit in Lincoln County and 16, to 355, at the Barbara Ester Unit in Pine Bluff.

The Northwest Arkansas Work Release Center in Springdale, the Ouachita River Unit in Malvern, the Wrightville Unit and the Central Arkansas Community Correction Center in Little Rock each had one new case, Murphy said.

Of those prisons, the Texarkana lockup had the most cases that were active, 40, followed by the Varner Unit, which had 26, and the Springdale lockup, which had 23. 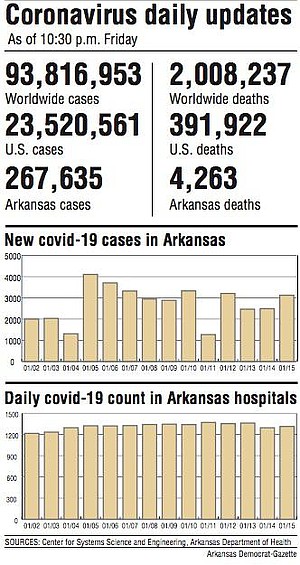