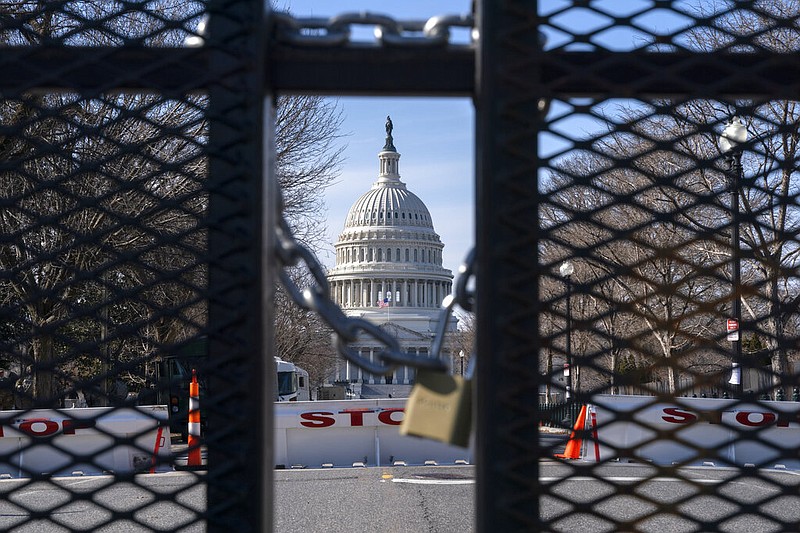 With the U.S. Capitol in the background, a lock on anti-scaling security fencing is seen on Saturday, Jan. 16, 2021, in Washington.

WASHINGTON — The latest on the fallout and increased security efforts after the attack of the U.S. Capitol by people loyal to President Donald Trump:

Police have released more details in the arrest of a man with a handgun and 500 rounds of ammunition at a checkpoint in Washington.

Wesley Allen Beeler was identified as being from Front Royal, Va., police said Saturday. According to The Washington Post, the “firearms-related stickers” that raised the concerns of police included one that said “Assault Life.” Another sticker reportedly said, “If they come for your guns, Give ’Em your bullets first.”

The Washington Post, citing Bloomberg News, said Beeler’s mother reported that her son carries a weapon for his job as a security officer.

Court documents say that Beeler approached the checkpoint about a half-mile from the Capitol, but did not have a valid credential for that area.

Separately, a law enforcement official told The Associated Press that Beeler did have a valid credential for inaugural events, though it was not issued by the government and was not recognized by the officers. The official was not authorized to discuss the ongoing investigation publicly and spoke on condition of anonymity.

Police have arrested a man with a handgun and 500 rounds of ammunition at a checkpoint in Washington set up ahead of President-elect Joe Biden’s inauguration.

Wesley Allen Beeler was charged with carrying a pistol without a license after being stopped at the checkpoint near the U.S. Capitol on Friday.

Court documents say Beeler approached the checkpoint but did not have a valid credential for that area. An officer noticed he had “firearms-related stickers” on his vehicle and asked him if he had any weapons inside.

The papers say Beeler told the officers he had a handgun under the armrest and police detained him at the scene. They searched his car and found a high-capacity magazine in the 9mm handgun, along with more than 500 rounds of ammunition in the vehicle. Authorities said he didn’t have a license to carry the gun in Washington.

His attorney did not immediately respond to a request for comment.