Despite filing in riot case,no evidence cited, he says by Compiled by Democrat-Gazette Staff From Wire Reports | January 16, 2021 at 4:36 a.m. 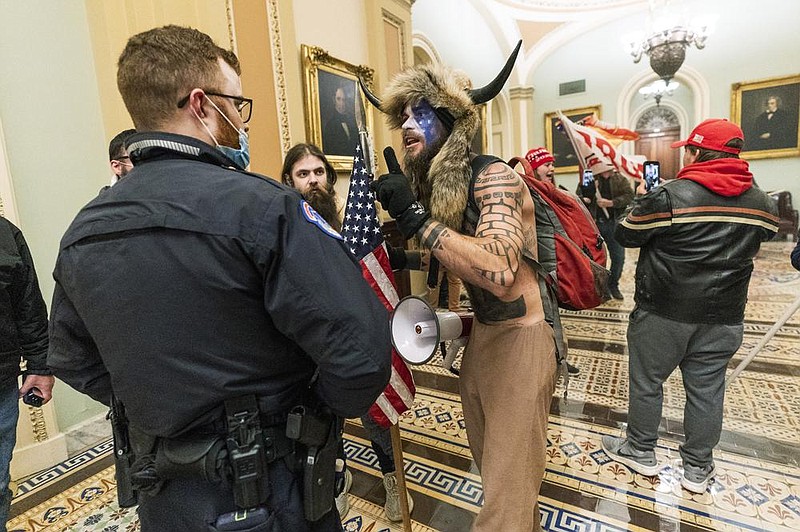 Jacob Anthony Chansley (center), who also goes by the name Jake Angeli, left a threatening note for Vice President Mike Pence when he climbed on the dais where Pence had earlier been presiding over the Electoral College vote when protesters stormed the U.S. Capitol on Jan. 6, U.S. prosecutors said. (AP/Manuel Balce Ceneta)

PHOENIX -- Federal prosecutors said there was "strong evidence" the mob that stormed the U.S. Capitol last week aimed to "capture and assassinate elected officials," but the head of the investigation cautioned Friday that the inquiry is still in its early stages and there was no "direct evidence" of such intentions.

The accusation was in a motion prosecutors filed late Thursday in Phoenix in the case against Jacob Chansley, the Arizona man who took part in the insurrection while sporting face paint, no shirt and a furry hat with horns.

"Strong evidence, including Chansley's own words and actions at the Capitol, supports that the intent of the Capitol rioters was to capture and assassinate elected officials in the United States Government," prosecutors wrote in their memo urging the judge to keep Chansley behind bars.

But Michael Sherwin, acting U.S. attorney for the District of Columbia, backed away from those claims Friday, saying they have "no direct evidence at this point of kill, capture teams."

Sherwin said there appears to have been confusion among some prosecutors in part because of the complexity of the investigation and the number of people involved. Prosecutors raised a similar prospect Thursday in the case of a former Air Force officer who they alleged carried plastic zip-tie handcuffs because he intended "to take hostages."

[Video not showing up above? Click here to watch » https://www.youtube.com/watch?v=P3-LYvAy230]

The sprawling investigation involves numerous cities and jurisdictions, in part because so many of the rioters simply went home; only 13 were arrested in the moments after the building was cleared.

The FBI has been investigating whether any of the rioters had plotted to kidnap members of Congress and hold them hostage, focusing particularly on the men seen carrying handcuffs and pepper spray.

The prosecutor in the case against Chansley said that when he climbed up to the dais where Vice President Mike Pence had been presiding moments earlier, Chansley wrote a threatening note to Pence that said: "It's only a matter of time, justice is coming."

Pence and congressional leaders had been ushered out by the Secret Service and U.S. Capitol Police before the rioters stormed into the chamber.

Chansley, who calls himself the "QAnon Shaman," surrendered to the FBI field office in Phoenix last weekend.

News photos show him at the riot shirtless, with his face painted and wearing a fur hat with horns, carrying a U.S. flag attached to a wooden pole topped with a spear.

QAnon is an apocalyptic and convoluted conspiracy theory spread largely through the internet and promoted by some right-wing extremists.

Chansley told investigators that he went to the Capitol "at the request of the president that all 'patriots' come to D.C. on January 6, 2021." An indictment unsealed Tuesday in Washington charges him with civil disorder, obstruction of an official proceeding, disorderly conduct in a restricted building, and demonstrating in a Capitol building.

More than 80 people are facing charges stemming from the violence, including more than 40 people in federal court. Dozens more were arrested for violating a curfew that night. The federal charges filed so far are primarily for crimes such as illegal entry, but prosecutors have said they are weighing more serious charges against at least some of the rioters. Some were highly trained ex-military members and police.

Sherwin said this week that he has organized a group of national security and public corruption prosecutors whose sole focus is to file sedition charges for the "most heinous acts that occurred in the Capitol."

The Air Force officer, Col. Larry Rendall Brock Jr., was arrested Sunday in Texas after being photographed on the Senate floor wearing a helmet and heavy vest and carrying zip-tie handcuffs.

Brock's attorney, Brook Antonio II, noted that he has been charged only with misdemeanors. Antonio said there was no direct evidence of Brock breaking doors or windows to get into the Capitol, or doing anything violent once he was inside.

On Thursday, authorities also arrested a man from Utah who filmed the fatal shooting of the Trump supporter in the Capitol. Police shot Ashli Babbitt, an Air Force veteran, as she was trying to climb through a broken window into the speaker's lobby.

John Sullivan, 26, a self-described journalist who filmed the shooting, said earlier this week that he was only there to document the events and didn't attend the riot as a Trump supporter.

In one video, Sullivan can be heard cheering on the rioters as they broke through the final barricade before the Capitol and saying, "We did this together. ... We are all a part of history."

Meanwhile, officials announced Friday that internal investigators for the Justice, Defense, Interior and Homeland Security departments will investigate how security officials prepared for and responded to the Jan. 6 rally.

The inspectors general for all of those agencies will review what people knew and how they prepared for that day, along with their actions during the riot, according to news releases. Questions have swirled about how such an important government building, with so many security agencies available to assist, could be overcome by a mob of people wielding bats, bear repellent and brute force.

The review was announced as the nation's capital is on edge, with a growing security presence aimed to prevent any further violence this weekend or at President-elect Joe Biden's inauguration Wednesday. Government officials are sealing off streets and some large public areas in the hopes of preventing a repeat of last week's chaos.

The Washington Post reported earlier this week that the FBI's Norfolk, Va., office circulated an intelligence report a day before the attack warning of talk online to attack Congress, break windows, push in doors, and "get violent ... Get ready for war." FBI officials said they provided that information to other law enforcement agencies the same day, but some senior officials outside the FBI have said they never saw it.

According to people familiar with the matter, dozens of people in Washington on the day of the riot were previously identified on a government watch list as potential terrorist suspects.

Horowitz's office will examine "whether there are any weaknesses in [Justice Department] protocols, policies, or procedures that adversely affected the ability of [the department] or its components to prepare effectively for and respond to the events at the U.S. Capitol on January 6," the statement said, adding that his office also might examine other issues that arise during the course of his investigation.

Chainalysis, a firm that investigates bitcoin transactions, found that the majority of the 22 transactions Dec. 8 went to Nick Fuentes, a far-right internet influencer who was in the crowd in Washington but has denied being part of the deadly mob that stormed the Capitol.

The 35-year-old Frenchman who transferred the money posted a suicide note on his blog the next day, saying he was chronically ill and wanted to leave his wealth to "certain causes and people."

Chainalysis did not release the man's identity. By retracing the researchers' steps, an Associated Press journalist found his blog and suicide note. A funeral home published his obituary, including burial information, but later deleted it; a cached version can still be found on the internet.

Federal investigators in the United States are looking into possible "coordination or planning" ahead of the riot and are using a number of methods they deploy routinely in criminal investigations, including examining financial transactions and cellphone and travel records.

Sherwin, the U.S. attorney in Washington, said investigators also were examining whether there was any "command and control," and he vowed to file charges if prosecutors can prove a conspiracy. No conspiracy charges have been filed so far.

The Chainalysis investigation found that the Frenchman sent 28.15 bitcoins, worth about $522,000, to 22 addresses, including many belonging to American far-right activists and organizations. Fuentes received about $250,000 worth. Other recipients included an anti-immigration organization, an alt-right streamer and a number of unidentified addresses.

"The donation, as well as reports of the planning that went into the Capitol raid on alt-right communication channels, also suggests that domestic extremist groups may be better organized and funded than previously thought," the researchers wrote. 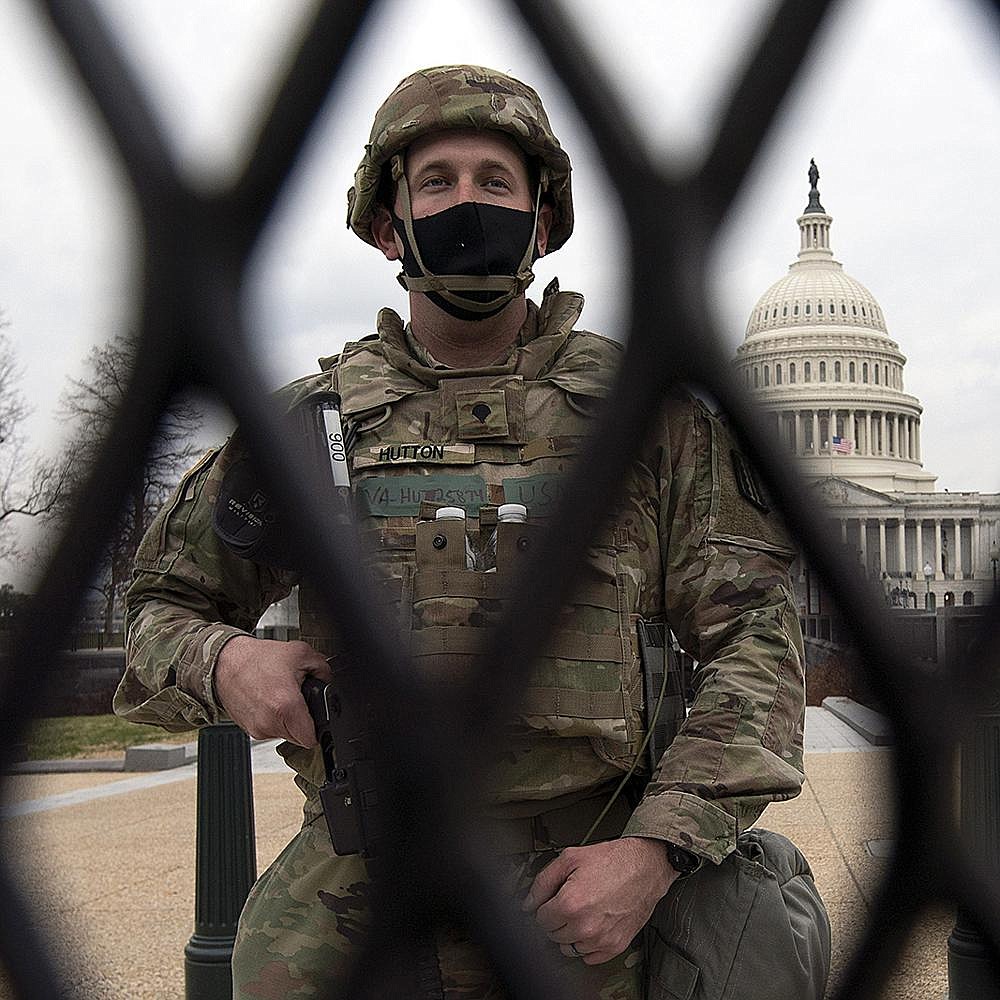 This National Guardsman is among thousands standing watch Friday at the U.S. Capitol, where security has ramped up since a mob stormed the Capitol last week and ahead of Joe Biden’s inauguration Wednesday. More photos at arkansasonline.com/116dcguard/. (AP/Jose Luis Magana)
ADVERTISEMENT