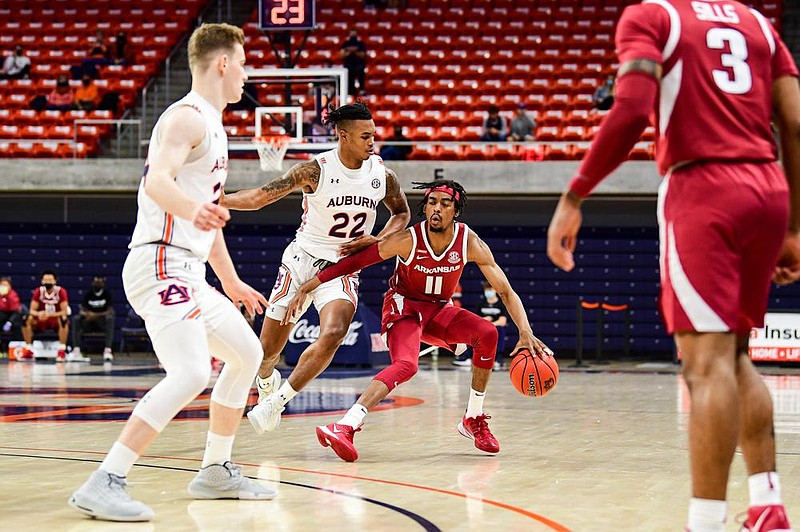 Arkansas senior guard Jalen Tate (11) dribbles into the front court during the Razorbacks’ victory at Auburn on Dec. 30. Heading into their game today at Alabama, the Razorbacks are one of 10 SEC teams to earn road victories in conference play this season. (Photo courtesy of the SEC)

FAYETTEVILLE -- The University of Arkansas basketball team already has won an SEC road game in Alabama this season.

Arkansas will try to make it two for the road when the Razorbacks play Alabama at 2:30 p.m. today in Coleman Coliseum.

The Razorbacks' 97-85 victory at Auburn on Dec. 30 is part of a winning record for SEC teams in conference road games.

SEC teams are 15-14 on the road, including the Crimson Tide's 85-65 victory over Kentucky in Rupp Arena on Tuesday night.

Reduced attendance at games because of coronavirus restrictions -- the announced crowd at Rupp Arena for the Alabama game was 3,075 -- has impacted the home-court advantage for all teams.

Ten SEC teams have won at least one conference road game this season.

"If you're in Rupp and you're up 20, and they're making a run and cut it to [12], the place would be going nuts," Alabama Coach Nate Oats said of previous seasons. "And they tried to get a little bit loud, but it's just definitely not the same as having 23,000 people in there."

Alabama lists its average home attendance this season at 2,050.

"At our place, our guys fed off the crowd a lot last year," Oats said. "But it's essentially no home-court advantage now."

"There's less of a home court advantage, but Alabama, they're 5-0," Arkansas Coach Eric Musselman said. "So wherever we would play them would be very difficult.

"They're a really, really well-coached team. They have a big-time identity of who they are, either layups or three balls. Their defense is much improved over last year.

"We have to bring it or else it isn't going to be nice."

"Do I feel more comfortable playing in Bud Walton than on the road still, even with the pandemic and limited amount of crowd? Absolutely," Musselman said. "You're in your daily routine."

"I'm sure Coach Musselman is going to have them really focused and locked in after the loss they took at LSU. I think we're probably catching them at the exact wrong time to be honest with you. I'd much rather have had them win against LSU than lose like they did."

The Razorbacks and Tide both will be missing key players today.

Alabama senior forward Jordan Bruner (knee) is out and senior guard Herbert Jones (wrist) is questionable after both starters were injured at Kentucky.

Without either of them on the court, the Tide still pulled way from the Wildcats in the final minutes.

"They have plenty of players regardless of who plays," Musselman said.

Alabama's 20-point victory at Kentucky was the most-lopsided home loss John Calipari has suffered in 12 seasons as the Wildcats' coach.

"You just don't win many games in Rupp Arena, the opponents don't," Calipari said. "Now, even though we have 3,000, it's different.

"Alabama played physically, extremely laser-focused, to beat us. When we had a chance to get back in the game, they just didn't let us. They just fought."

Arkansas has won three consecutive games at Alabama, including 82-78 last season when the Razorbacks overcame a 12-0 deficit.

"I hope we learned a lot, because we were up a decent amount right out of the game on them," Oats said. "Then we let it slip away.

"We've been up on some teams lately, and they've made a little run, and I think our guys have grouped together, and made some tough plays and gotten some stops, gotten some buckets."

Oats said the Tide have to be as focused against Arkansas as they have been in winning on the road.

"It's just kind of what it is this year."

SEC teams are 15-14 in conference road games this season, a trend Arkansas hopes to enhance when the Razorbacks play at Alabama today:

WHERE Coleman Coliseum, Tuscaloosa, Ala.

CHALK TALK Arkansas has won six consecutive games against Alabama and seven of the last eight … Alabama senior guard Herbert Jones (wrist) is questionable for the game and senior forward Jordan Bruner is out (knee) … Arkansas will be without senior forward Justin Smith (ankle) and freshman Khalen Robinson (season-ending foot surgery) … Alabama senior guard John Petty has 260 three-point baskets and is four shy of breaking the career record of 263 by Brian Williams from 1996-99 … Arkansas is No. 30 in the NET rankings and Alabama is No. 23 … Alabama has won six consecutive games since losing to Western Kentucky 73-71 … Since the Razorbacks joined the SEC, they’re 28-25 against the Crimson Tide … In SEC games only, Alabama is averaging 83.6 points to lead the conference … Arkansas is 1-2 on the road with a win at Auburn and losses at Tennessee and LSU … Razorbacks junior guard JD Notae is averaging 15.0 points, 3.3 rebounds off the bench for the Razorbacks … Arkansas junior guard Desi Sills, who has played off the bench the previous two games, is averaging 11.9 points and 4.1 rebounds … Alabama is averaging 9.8 three-point baskets and Arkansas 9.4 … Kevin Fitzgerald and Dane Bradshaw will call the game for the SEC Network.