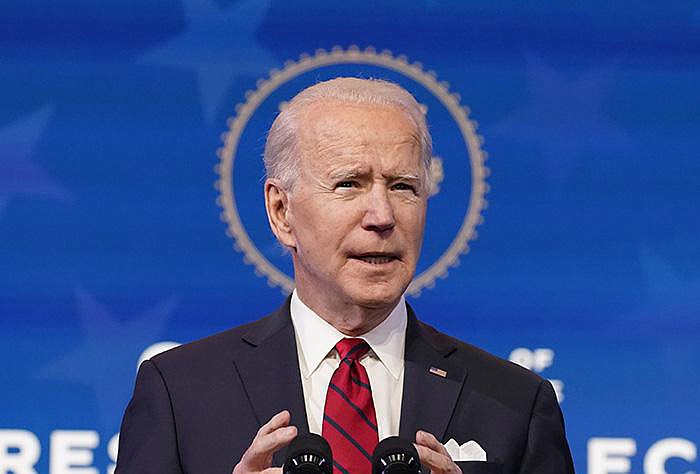 President-elect Joe Biden said Friday that delivering 100 million vaccine shots in his first 100 days in office is only the beginning of his coronavirus plan. More photos at arkansasonline.com/116covid19/. (AP/Matt Slocum)

WASHINGTON -- When Health and Human Services Secretary Alex Azar announced this week that the federal government would begin releasing coronavirus vaccine doses held in reserve for second shots, no such reserve existed, according to state and federal officials briefed on distribution plans.

The Trump administration already had begun shipping out what was available beginning at the end of December, taking second doses directly off the manufacturing line.

The news comes as the global death toll from covid-19 topped 2 million Friday.

The milestone was reached just over a year after the coronavirus was first detected in the Chinese city of Wuhan.

While the count is based on figures supplied by government agencies around the world, the real toll is believed to be significantly higher, in part because of inadequate testing and the many fatalities that were inaccurately attributed to other causes, especially early in the outbreak.

Meanwhile, health officials across the country who had anticipated their extremely limited vaccine supply as much as doubling beginning next week are confronting the reality that their allocations will not immediately increase, dashing hopes of expanding eligibility for millions of elderly people and those with high-risk medical conditions. Health officials in some cities and states were informed in recent days about the reality of the situation, while others are still in the dark.

Because both vaccines authorized for emergency use in the United States are two-dose regimens, the Trump administration's initial policy was to hold back second doses to protect against the possibility of manufacturing disruptions. But that approach shifted in recent weeks, according to the officials, who spoke on condition of anonymity because they were not authorized to discuss the matter. The result is that next week's allocations will remain flat.

These officials were told that Operation Warp Speed, the Trump administration's initiative to speed the development of vaccines and therapeutics, stopped stockpiling second doses of the Pfizer-BioNTech vaccine at the end of last year, instead taking second doses directly off the manufacturing line. The last shots of Moderna's supply held in reserve, meanwhile, began shipping out last weekend.

[Video not showing up above? Click here to watch » https://www.youtube.com/watch?v=t7ywzZuk2l4]

The shift, in both cases, had to do with increased confidence in the supply chain, so that Operation Warp Speed leaders were confident they could reliably anticipate the availability of doses for booster shots -- required three weeks later in the case of the Pfizer-BioNTech product and four weeks later under Moderna's protocol.

But it also meant there was no stockpile of second doses waiting to be shipped, as Trump administration officials suggested this week. Azar, at a Tuesday briefing, said, "Because we now have a consistent pace of production, we can now ship all of the doses that had been held in physical reserve." He explained the decision as part of the "next phase" of the nation's vaccination campaign.

The lack of reserve is not expected to interfere with people getting their second shots. States are still getting a regular supply of vaccine, if smaller than they had anticipated, but officials say they are angry and bewildered by the shifting directions.

Health and Human Services Department spokesman Michael Pratt confirmed in an email that the final reserve of second doses had been released to states for order last weekend but did not address Azar's comments this week, saying only, "Operation Warp Speed has been monitoring manufacturing closely, and always intended to transition from holding second doses in reserve as manufacturing stabilizes and we gained confidence in the ability for a consistent flow of vaccines."

He also said states have ordered only about 75% of what is available to them.

Azar's comments followed a Jan. 8 announcement by President-elect Joe Biden's transition team that his administration would move to release all available doses, rather than holding half in reserve for booster shots. Biden's advisers said the move would be a way to accelerate distribution of the vaccine, which is in short supply across the country.

When Azar embraced the change four days later -- after initially saying it was shortsighted and potentially unethical to risk the availability of a booster shot -- he did not say the original policy already had been phased out, or that the stockpile had been exhausted. Signaling to states that they would soon see expanded supply, he also urged them to begin vaccinating adults 65 and older and those younger than 64 with a high-risk medical condition. Officials in some states embraced that directive, while others said suddenly putting hundreds of thousands of additional people at the front of the line would overwhelm their capacity.

In subsequent conversations with state and local authorities, federal officials sought to temper those instructions, said people who participated in the conversations. Gustave Perna, chief operating officer of Operation Warp Speed, spoke directly to officials in at least two of the jurisdictions receiving vaccine supply, explaining that allocations would not increase and that they did not have to broaden eligibility as they had been told, according to a health official who was not authorized to discuss the matter.

Governors on Friday accused the Trump administration of deceiving the states about the amount of vaccine they can expect to receive.

Oregon had announced earlier this week that it would expand vaccine eligibility to roughly 760,000 residents 65 and older, as well as teachers and child care providers, because of what it said were promises that the state's vaccine allotment would be increased.

But Democratic Gov. Kate Brown said those plans are now in disarray because of "deception on a national scale" by the administration.

Brown said on Twitter that she was told by Perna that states will not be receiving increased shipments of vaccine from the national stockpile next week "because there is no federal reserve of doses."

As a result of what she called "a cruel joke," Brown said the state will now postpone vaccination of senior citizens to Feb. 8, instead of Jan. 23, and initially limit it to people 80 and older.

Minnesota Gov. Tim Walz, a Democrat, said he was among several governors deceived by federal officials about availability of a strategic supply of doses.

"This one is so far beyond the pale to be almost unimaginable," he said. "Who's going to be prosecuted for this? What are the states to do when they've been lied to and made all their plans around this?"

Alena Yarmosky, a spokeswoman for Virginia Gov. Ralph Northam, said governors were "told explicitly" Tuesday that they would be provided additional doses. Northam, a Democrat and a doctor, had then moved quickly to announce that the state would expand vaccine eligibility.

"What we're seeing is fully in line with the dysfunction that has characterized the Trump administration's entire response to covid-19. President-elect Biden cannot be sworn in fast enough," she said.

On Friday, Biden said getting 100 million shots into Americans' arms in his first 100 days is only the beginning of his coronavirus plan. Lasting impact, he said, will come from uniting the nation in a new effort grounded in science and fueled by billions in federal money for vaccination, testing and outbreak sleuths.

"You have my word: We will manage the hell out of this operation," Biden said. But he also underscored a need for Congress to approve more money and for people to keep following basic precautions, such as wearing masks, avoiding gatherings and frequently washing their hands.

"This is not a political issue," Biden said. "This is about saving lives. I know it's become a partisan issue, but what a stupid, stupid thing to happen."

Biden spoke a day after unveiling a $1.9 trillion American Rescue Plan to confront the virus and provide temporary support for a shaky economy. About $400 billion of the plan is focused on measures aimed at controlling the virus. Those range from mass vaccination centers to more sophisticated scientific analysis of new strains and squads of local health workers to trace the contacts of infected people.

In Alabama, Georgia, Mississippi and South Carolina, less than 2% of the population had received its first dose of a vaccine at the start of the week, according to data from the states and the U.S. Centers for Disease Control and Prevention.

As in other parts of the country, states in the South face a number of challenges: limited vaccine supplies, health care workers who refuse to get inoculated, and bureaucratic systems that are not equipped to schedule the huge number of appointments being sought.

But other states have still managed -- at their best -- to get the vaccines into the arms of more than 5% of their populations.

Though it's not clear why the Deep South is falling behind, public health researchers note that it has typically lagged in funding public health and addressing disparities in care for its big rural population.

"When you combine a large percentage of rural residents who tend to be the hard-to-reach populations and have lower numbers of providers with trying to build a vaccine infrastructure on the fly, that's just a recipe for a not-so-great response," said Sarah McCool, a professor in public health at Georgia State University. 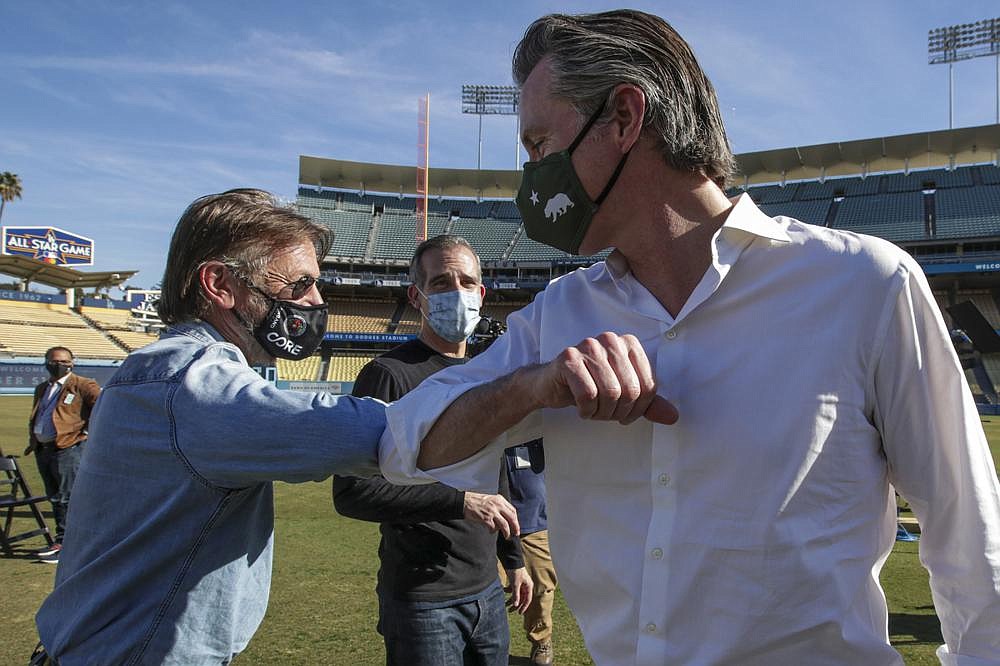 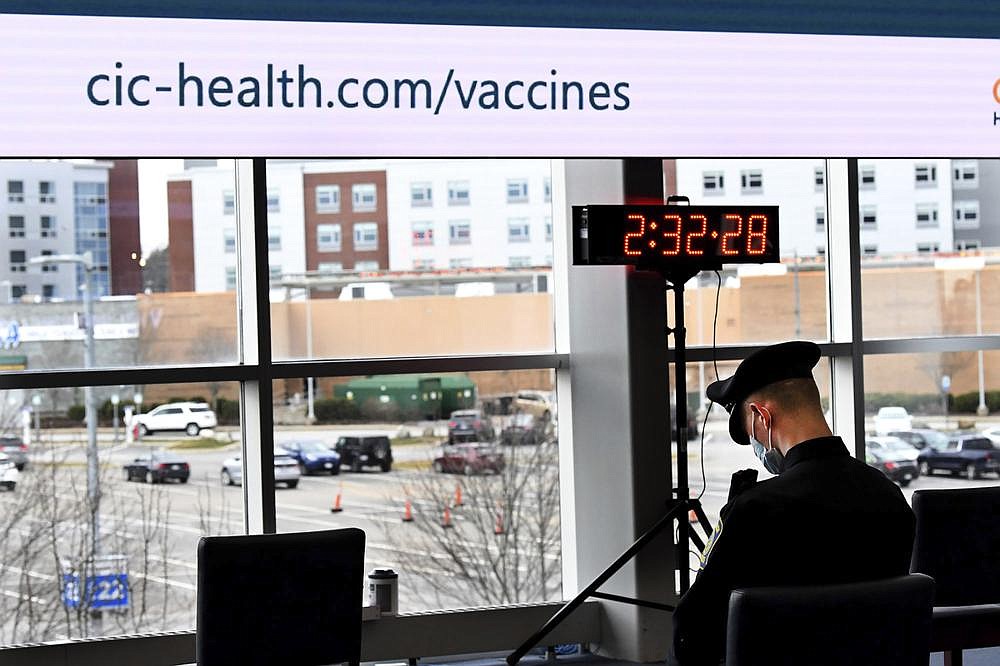