OPINION | SPIRITS: Alcohol as a crutch for a broken leg 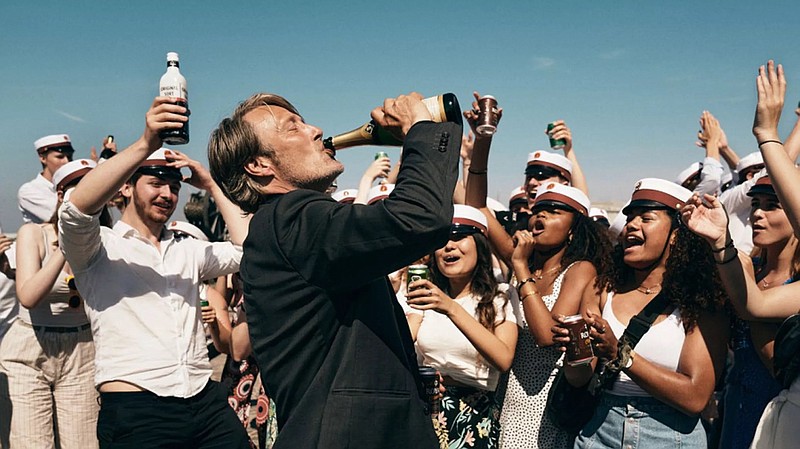 Mads Mikkelsen plays a history teacher who experiments with drinking to improve his performance in the classroom in Thomas Vinterberg’s “Another Round.” (Special to the Democrat-Gazette/Samuel Goldwyn Films)

One of the best movies of 2020 is "Another Round" by Thomas Vinterberg. Its Danish title is "Druk" which translates as "binge drinking" and seems more to the point.

A tender and at times beautiful meditation on the ways people use alcohol and the ways in which individual chemistries interact with the drug, it never opened in Arkansas theatrically.

Now you can rent or buy the film through the usual streaming services — Amazon Prime, iTunes, Google Play, etc. — and if you're a fan of foreign cinema I highly recommend it. It's making a lot of critics' year-end lists and has been selected as the Danish entry for Best International Feature Film at the 93rd Academy Awards.

Its star, Mads Mikkelsen, is familiar to American audiences, having played a Bond villain in 2006's "Casino Royale" and Hannibal Lecter in the television series "Hannibal."

That aside, "Another Round" is an intriguing dark comedy — which means that a lot of people won't perceive it as a comedy at all. Others might be unnerved by the final 10 minutes, which are surreal and upbeat and possibly shocking to those who assume movies must be moralistic. Still, it gets to something that those of us who drink intuitively understand.

It's about four teachers at a "gymnasium" — secondary education aimed at university prep for students 16 years and older — in a suburb of Copenhagen. All of them are grappling with unmotivated students and the creeping malaise that Walker Percy designated "everyday-ism."

Mikkelsen plays Martin, a history teacher who, as the film opens, seems deeply depressed. He's alienated from his wife and teenage sons, and his students are so uninspired by his lessons that they arrange an intervention with their parents. As they are facing tests that will determine what universities they'll get into, they need him to teach better, to get them more excited about their lessons.

Martin understands. He has been in a slump for a decade or more, ever since he had to forego the research fellowship he'd won, in order to raise his family.

At the 40th birthday for a colleague, one of them raises the theory of Danish psychologist Finn Skårderund, who has asserted that human beings need to be a little bit tipsy — with a blood alcohol level of about 0.05 — to perform at their best.

The teachers resolve to test Skårderund's hypothesis, and soon they are nipping at bottles of vodka while at school in an attempt to maintain a steady buzz, which they monitor using Breathalyzers. They plan to document their experiences, and set certain rules. For instance, they resolve not to drink after 8 p.m. or on weekends, citing Ernest Hemingway as their model. (While I doubt Hemingway kept to this schedule, he always claimed he never drank while working. Which is the opposite of what our teachers do in the film.)

Maintaining a little buzz throughout the day seems to work at first. Martin becomes a dynamo, regaling his students with lessons about alcohol users Hemingway, Winston Churchill and Franklin Delano Roosevelt, while pointing out that Hitler was a vegetarian teetotaler. The others realize similar benefits, though it's inconvenient that they can't drive themselves home. They begin to wonder if 0.05 BAC is good enough; might it be better if they increase it a little? Then a little bit more?

Things get complicated fairly quickly. Even if you're a better teacher after a shot of vodka, it's not wise to leave it around the school. Maintaining a constant BAC of 0.05 is impractical and dangerous to try. But there's a kernel of what Stephen Colbert famously labeled "truthiness" to Skårderund's theory. Perhaps a little alcohol, a glass or two of wine, is not a bad thing for most of us. It lubricates and lessens tension. It makes us a wee bit braver; maybe we reveal more of our true selves.

Skårderund is an actual Norwegian psychologist, and it's hard to find out much about him unless you read Norwegian. According to Wikipedia he works with elite athletes and as a film, art and literature critic. His theory about human beings needing a little alcohol in order to function at their best — which is how the theory is presented in the film, not necessarily how Skårderund would explain it — has been pretty much dismissed by most experts.

When the website vice.com asked Elliott Bird, a senior lecturer in physiology at the U.K.'s Anglia Ruskin University, about the claim that human beings are born with an alcohol deficiency, he said:

"There's no truth to it at all. Obviously, the human body is born without any alcohol content, unless the mother was drinking at the point of delivery or during labour. If you don't drink alcohol, it's not in your blood. You don't synthesize alcohol or brew it in your bloodstream or stomach."

But that kind of science stuff misses the point of "Another Round." As a lot of us understand, especially after the first few weeks of this new year (I am glad I eschewed the Dry January ritual that a lot of my friends observe), a drink at the end of the day can feel really good. Two can be even better. But the law of diminishing returns kicks in pretty quickly. Like Pete Townshend says, sometimes a little is enough.

In the film, some characters benefit from a little alcohol here and there — a student crippled by social anxiety performs better on an oral exam after having a nip of vodka. That doesn't mean alcohol is a performance-enhancing drug, only that it is a solvent that can help us negotiate stress.

Of the four teachers in the movie, three make it out of the other side of the experiment. One doesn't. And that happens, with alarming frequency. All of us know people who can't take another drink without endangering themselves and others. Alcoholism is a serious problem. We get that. But if you're reading this column, you probably like to take a drink now and then. It's part of our culture, a way of enhancing our lives. Sure, you could do without it. But unless you have an adverse reaction, why would you?

Regardless of Skårderund's theories, there's a real debate about whether low to moderate alcohol intake can provide health benefits. People who worry about whether they should have a drink are likely to be higher strung than people who can take or leave a cocktail in the evening. We are all messy, full of contradictory impulses and unconscious desires. Our emotional states cannot be distilled in test tubes. A little bit of poison can be the antidote.

What I really like about "Another Round" is that it refuses to draw any conclusions as to whether booze is a good thing or a bad thing. It certainly does not solve major problems, but maybe it can help us over a rough patch now and then. People say it's a crutch, but that's exactly what you need when your leg is broken. 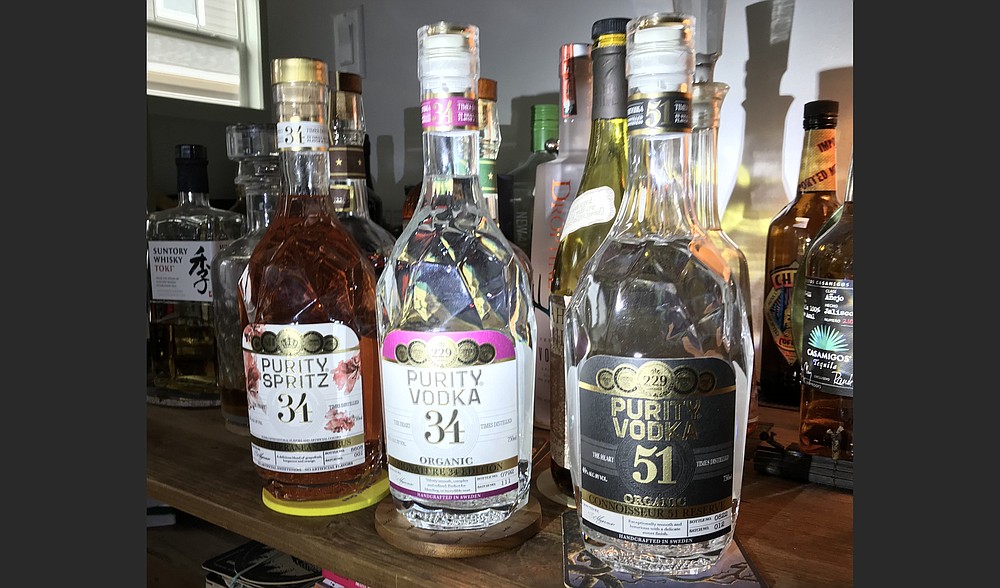 Vodka is the drink for when you don’t want them to know you’re drinking. (Arkansas Democrat-Gazette/Philip Martin)

Vodka is the spirit of choice of the teachers in "Another Round." It's not the only thing they drink, nor the most amazing — that honor would probably go to the Sazerac, which is received with religious ecstasy by Martin — but it's the most practical. Vodka looks — and in many versions, tastes — like water. It's said to be hard to detect on one's breath. You can pour some into a water bottle and nip on it during a staff meeting.

A lot of people judge their vodka by how neutral it is — they want it tasteless, odorless and invisible. If you're looking for a silver whisper that doesn't call attention to itself, you might want to go with Stolichnaya. We used to shove a bottle of its Cristal into the back of our freezers in the '80s (I'm not using the royal "we" here; anecdotally I've heard of lots of people who did this) and drink brain-freezing shots.

Vodka is still probably the most popular spirit out there, and on my last trip to the big west Little Rock liquor store I frequent I counted more than 100 different varieties. People like vodka.

Tito's is a fine vodka, and Rock Town makes a wonderful popularly priced one with a pleasant character and flavor. The other night I made martinis with a new (to me) vodka, Purity, an organic Swedish marque made from wheat and (unusual) barley that emphasizes, as you might have guessed, "purity" in its brand story.

In our martinis the Purity 51 — so named because it is allegedly distilled 51 times — is remarkably neutral, comparable to vodkas costing many multiples of the $30 or so it will cost you in a liquor store. It's barely there in a Churchill cold drink.

As it warms a little, you catch a hint of spiciness and creaminess and a pleasant viscosity. But the profile is high neutral — the closest comparison we could come up with was Ciroc, the French brand distilled from grapes, though Purity marketers would invite you to compare it to Grey Goose.

Same goes for the Purity 34 line, which is priced a couple of dollars less than its numerically enhanced brother. Maybe you can detect a little more body in the 34.

Purity simulates the characteristics of the vodkas many people believe are worth a premium. You won't disappoint many vodka snobs — are there, in fact, vodka snobs? — by serving this.

But my particular taste runs to something with more meat on its bones. A good old chewy peasant potato vodka like the tsars used to drink.