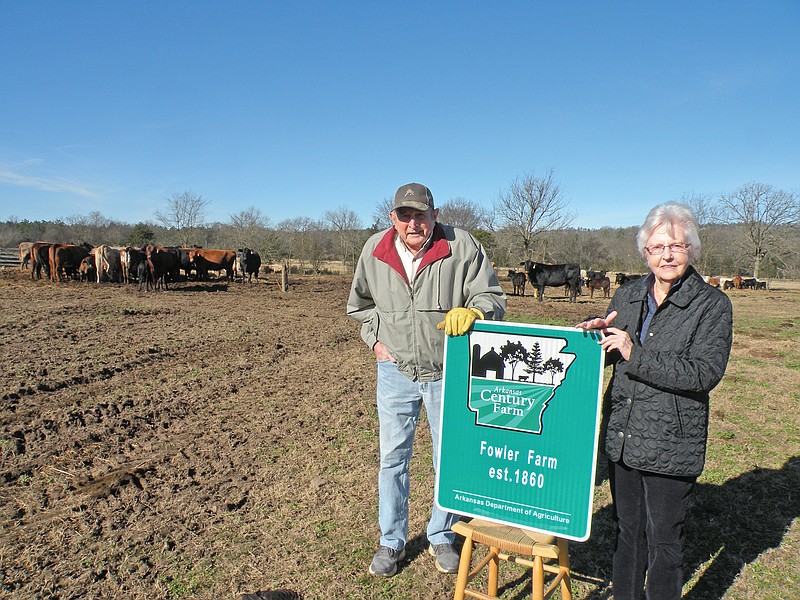 Robert E. Fowler and his wife, Libby Tillman Browne Fowler, of Perry County were among 30 families inducted into the Arkansas Century Farm Program in 2020. Each farm received a sign like the one the Fowlers are holding. The Fowlers, whose ancestors established the farm in 1860, now raise cattle on more than 500 acres in Perry County.

On Sept. 1, 1860, Hardy Fowler of Tennessee purchased 120 acres in Perry County from the United States of America. He received a land patent signed by then President James Buchanan. That acreage, along with other land, remains in the Fowler family and was recently named a 2020 Arkansas Century Farm.

Robert E. Fowler and his wife, Libby Tillman Browne Fowler, are the current owners of the farm. They raise cattle.

The Fowlers have two adult daughters — Deborah C. Fowler, 64, of Lubbock, Texas, and Robin Killgore, 62, of Casa. Deborah is a professor of hospitality and retail management and associate chairwoman in the Texas Tech University College of Human Sciences in Lubbock. She plans to build a house on the family farm in Arkansas when she retires. Robin and her husband, Jiggs, have two sons, Clay Killgore, 40, and Ben Killgore, 36, who is married to Melody and has two children, Gracie, 6, and Ridge, 3. Robin and Jiggs live on the Fowler farm.

“Several members of the Fowler family moved from Gibson County, Tennessee, [to Arkansas] sometime between 1850 and 1860,” Deborah said. “They were on the 1850 census for Tennessee and 1860 for Perry County, Arkansas.”

Deborah said Hardy Fowler and his wife, Sarah Dockings Fowler, were found on the 1860 census for Perry County. Their son, John Samuel Fowler, 19, was living with his parents at that time.

“This parcel is also a part of the present Fowler farm owned by Robert E. Fowler,” Deborah said.

The second generation to live on the Fowler farm was Elizabeth Bostick Fowler, widow of John Samuel Fowler, who died in 1876 when he was 35. Hardy Fowler designated his son’s widow, Elizabeth, and her children as co-owners of the land her husband would have received.

The third generation to live on the farm was James Robert Lee Fowler, a son of Elizabeth and John Samuel Fowler. James’ siblings and mother later deeded the land to him, and he purchased more land over time. James, who was born on the Fowler farm in Perry County in 1874 and died in 1957, was married to Mary Belle Grehl, who died in 1958. His land passed to two children — Sadie Fowler Keller and Oscar Oliver Fowler, who is the father of the present-day owner, Robert E. Fowler.

Oscar received land in 1957, making him the fourth generation to live on the farm. His sister, Sadie, a former resident of Oklahoma, purchased and was given land by her parents. She sold part of her land to Oscar.

Robert E. Fowler is the fifth generation on the Fowler farm, also known as the 4-F Farm. He purchased land from his aunt, Sadie Keller Fowler, and inherited land from his parents, Oscar Oliver Fowler and Grace Truman Timmons Fowler. Robert currently owns approximately 560 acres. The Century Farm recognition is for 395.85 acres.

“I grew up down the road from here,” Robert said during a visit to their home on Arkansas 10 just outside the community of Homeland. “We have a Casa mailing address, but we live between Homeland and Mulberry.

“I graduated from Perryville High School,” Robert said. “Libby grew up in Perryville. We married in 1953.”

Robert, who will be 87 in March, worked for the Rock Island Railroad and lived in Chicago for a while. After moving back to Arkansas, he worked at AT&T in Morrilton, as he still farmed near Casa. Libby, 84, worked for 10 years as a secretary at Winrock International; she also worked for AT&T in Morrilton.

Robert and Libby were not able to attend the official Arkansas Century Farm recognition on Dec. 11 at the Embassy Suites by Hilton in Little Rock.

Gov. Asa Hutchinson and Secretary of Agriculture Wes Ward accepted the award for families who were not present.

“I still work on the farm, but I have help,” Robert said, adding that he raises a mixed breed of cattle. “I like the red cows (Brangus cattle). We raised poultry for a while but got out of it.”

Deborah, who was raised in Morrilton, said she and her sister never really worked on the farm.

“We would occasionally pick up a dead chicken,” Deborah said, smiling. “Daddy worked at AT&T in Morrilton and came out here to do cattle and hay. My sister and I would ride with him.

“We want to keep the farm in the family. My sister has two sons and two grandchildren, so we are hopeful some of them will want to farm.”