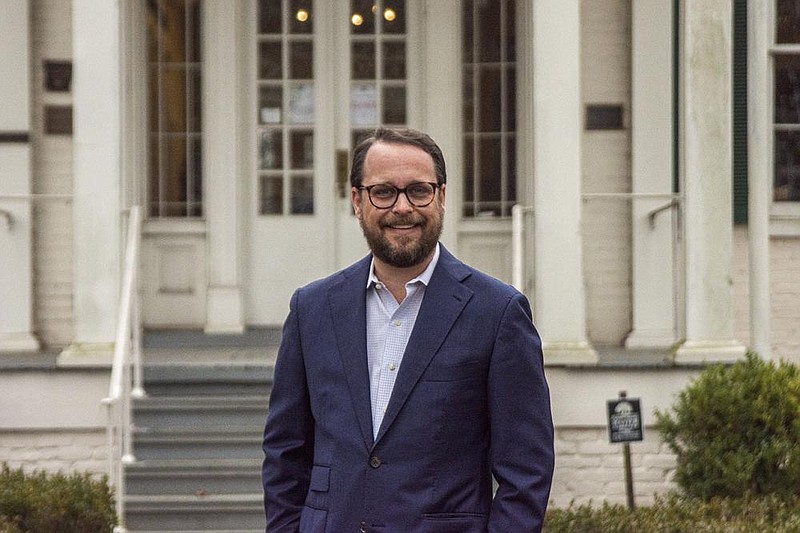 Quapaw Quarter Association Board member David Robinson stands in front of Curran Hall. Built as a private residence in 1842, the building serves as the Little Rock Visitor Center (currently closed due to covid-19) and is managed by the QQA. (Arkansas Democrat-Gazette/Cary Jenkins)

The organization, says David Robinson, president of advocacy for the QQA, encompasses the entire city of Little Rock.

"We really define that as the area that the Quapaw Nations had as their tribal lands, and that was all of Central Arkansas, really. For our purposes, that encompasses North Little Rock, Little Rock, Sherwood. We really take a holistic view of all those areas."

He explains that the original membership did have the goal of preserving the Governor's Mansion Historic District, "but there are a wealth of historic districts across the city and other areas that are not in historic districts -- that don't receive any type of protection-- but are full of historic homes."

In addition, he says, there are neighborhoods in transition that should be looked at for preservation, such as the Kingwood neighborhood with its midcentury houses. "Midcentury -- people don't think that's old enough. But it is reaching 60 to 70 years old, in some cases, and they deserve preservation. So it's not just Victorian-style houses that we're encouraged to protect."

Robinson, a Little Rock native who lives in the historic Fine House on Spring Street with his wife, Alex, and their 4-year-old daughter, has served on the QQA's advocacy committee for two years.

Historic preservation is not just looking to the past, but planning ahead for the future. He says QQA not only advocates for existing structures, but also development in historic neighborhoods that's appropriate for the character of the area.

"You have to be thinking constantly about placemaking, about preservation. Preservation is not only historic buildings, right? It can be public spaces. It can be the interaction of parks in the community. It can be infill development. Or, how it affects existing buildings."

The organization has also been involved in trying to limit the effect the expansion of Interstate 30 has on significant neighborhoods. "That's been a controversial issue that has really galvanized lots of historic neighborhoods."

In looking ahead, the QQA is putting together a working group of stakeholders along Interstate 630, which they believe will eventually be expanded.

"We've seen that expansion up into Fair Park, already, heading west. So our main concern is the areas around the zoo, the Hillary Clinton [Children's] Library and the areas of inter-connectivity around Philander Smith [College] and the historic Ninth Street corridor. "

Robinson says the group will try to create a bold vision of what can be done, explaining "that road [I-630] separated this town in a big sense."

"I think that we need to be cognizant and aware of how we approach any expansion on 630. And so our group will hopefully include members as diverse as Children's Hospital, Philander Smith and the Mosaic Templars, the zoo, library folks and all the neighborhoods in between," he explains.

"We want to understand and set the vision for it and if that ever becomes a subject matter, it's something that we're ahead of, and we're not responding to it," he explains. "Part of what the initial group has been talking about: They're very expensive -- but they're called deck parks, where we bridge over the interstate to tie back sections of the community."

For examples, he lists connecting areas between Philander Smith and Ninth Street, around the Children's Hospital or the zoo and the children's library. He acknowledges that deck parks can be expensive. "We understand that the city is strapped for cash, but there are things that we can go after -- grants and federal funds. And I think we don't need to be shy saying this is what we think our vision should be."

And while the QQA has had success with saving beautiful old houses like the antebellum Woodruff House, which currently has several prospective buyers, the buildings don't just have to be architecturally beautiful to be worth saving.

"We advocate for buildings that sometimes don't get a lot of love but have a historic nature," Robinson says. "So in this past year, we had some great successes."

The QQA was part of the success in keeping the Gay Building, a Beaux Arts structure at 300 South Broadway, from being torn down and most recently advocated for the Murphy-Jeffries building.

The building was owned by Andrew Jeffries, one of the first Black real estate agents in the state and the first Black bail bondsman. "That's a good example of a building that a lot of people overlook. It is something that I feel that the city needs to work harder at doing, which is preserving our historic African American sites."

He explains that it's not just about the bigger Black historic sites. There are a lot of important houses as well in the Dunbar and Wright Avenue neighborhoods, both now historic districts.

"What the advocacy committee does is track buildings that are in danger; that we feel like are on the brink of potentially being torn down. We advocate for those buildings. We go to the owners and we try to connect the owners to resources."

The QQA has been able to advocate for historic structures despite the pandemic and fundraisers being canceled.

"Unfortunately, in 2020, we couldn't do any of our events," Robinson says. They have had to rely on government grants and loans to stay open.

"And we were successful, and have been successful. We've seen an increase in our membership and an increase in our giving too, which is great. I think people, in this time of covid, when they're staying in their homes, understand a sense of place and in community because we're all in this together."

He says at this moment, they are planning for a virtual Spring Tour of Homes and maybe an in-person tour in the fall.

"We'll just have to see how the vaccinations go and where we're at with covid. But you know, that's one of our big events that we're known for."

The Spring Tour will be of the Pettaway Neighborhood, which Robinson says is one of Little Rock's most up and coming neighborhoods. The area is a mixture of historic houses -- not necessarily the big grand historic ones, he says, but they're very important. The historic houses are mixed with interesting new architecture.

He says the neighborhood is close-knit. "Everybody knows all their neighbors, you know, 'let's have a street party', that kind of community. It's full of just very good people in a community that has a wide variety of [socioeconomic] backgrounds. And so we're highlighting that neighborhood in our Spring Tour -- to be determined whether it's completely virtual or in person. We'll let everybody know."

To learn more about the Quapaw Quarter Association and its events and programs, visit Quapaw.com.