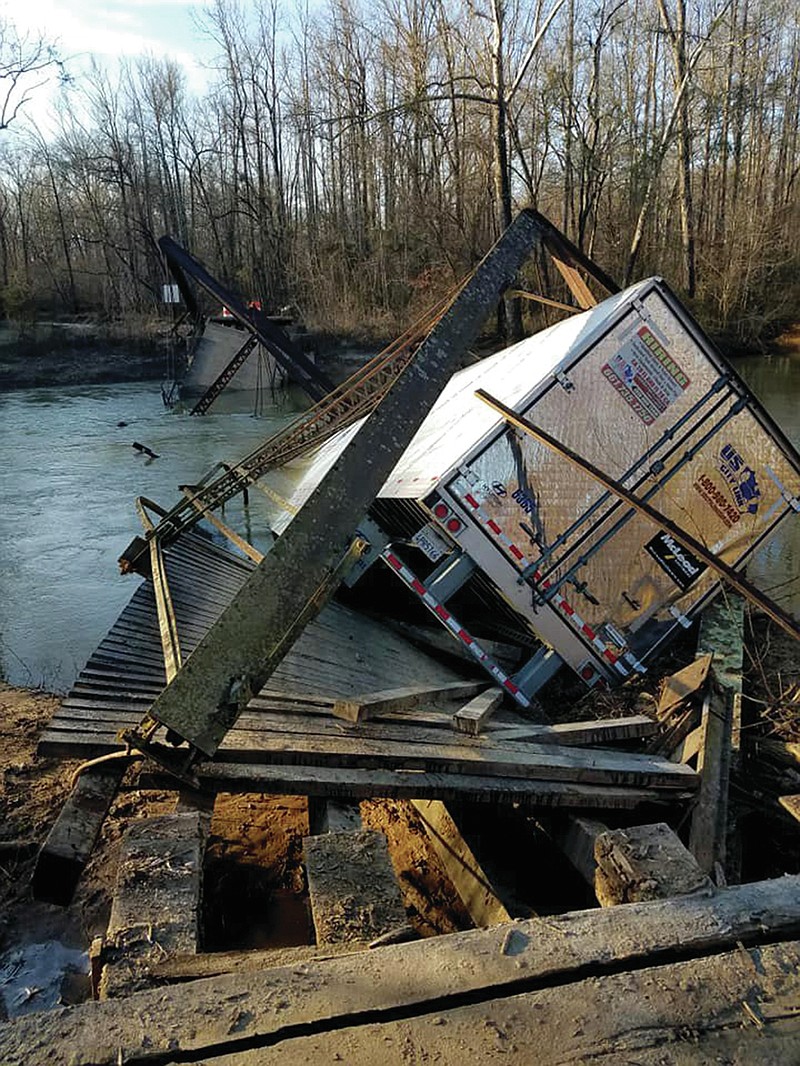 Special to the Arkansas Democrat-Gazette - 01-30 -2019 - An 18-wheeler sits atop the collapsed Dale Bend Bridge over the Petit Jean River near Ola in Yell County, January 30, 2019. Officials said the driver was following GPS directions when the bridge collapsed under the weight of the truck. The driver escaped unharmed.

Arkansas is suing a California trucking company and its driver, who followed GPS directions down a one-lane dirt road in 2019 and destroyed a historic bridge over the Petit Jean River near Ola.

The truck, loaded with frozen chicken, weighed 38 tons, according to the lawsuit filed Tuesday in Yell County Circuit Court in Danville.

The bridge capacity, which was marked with signs, was 6 tons.

As a result, the Dale Bend Bridge collapsed, sending the Freightliner truck nose-first into the cold Petit Jean River on the night of Jan. 30, 2019. The truck driver, Harjinder Singh of Corona, Calif., apparently was uninjured.

"GPS was wrong," Singh told a reporter for the Arkansas Democrat-Gazette the day after the incident.

Besides the bridge, the weight of the truck also destroyed concrete abutments and "damaged/destroyed" roadway approaches, according to the lawsuit.

Singh's actions caused more than $500,000 in damage and/or loss of property, wrote Jeff Priebe, an attorney with Rainwater, Holt & Sexton of Little Rock who is representing the plaintiffs. It amounted to a "catastrophe" under Arkansas Code Annotated 5-38-202, wrote Priebe.

The state filed the lawsuit by and through its political subdivision known as Yell County and by and through the Yell County judge, who oversees county roads. The Arkansas Game and Fish Commission is also a plaintiff in the case because the bridge was in the Petit Jean River Wildlife Management Area.

Defendants are US Citylink Corp. of Bakersfield, Calif., and Singh.

Without the bridge, people have to drive 12 miles to cross the river, according to the lawsuit.

With no bridge over the river, costs have risen for Game and Fish personnel to maintain the wildlife management area, wrote Priebe. Costs also have risen for residents because they have to take the long way around to get to the other side of the river, according to the suit.

"The purpose, of course, in bringing this lawsuit is to obtain the funds needed to repair the real property of the plaintiffs so that the public way will be restored -- with a restored bridge-way over the river and a restored road-way," according to the lawsuit.

Built in 1930, the bridge was on Dale Bend Road, which also is designated as Yell County Road 49.

Dale Bend Bridge, also known as the Petit Jean River Bridge, was a 159-foot-long, metal span constructed so farmers could move their crops and other commerce through the county and the state, wrote Priebe. It is one of only three Pratt thru-truss bridges in Yell County and was placed on the National Register of Historic Places in 2010.

"Being an old historic bridge with steel trusses, the Petit Jean River Bridge had a clearly posted weight limit of six tons or 12,000 pounds," according to the lawsuit.

On Jan. 30, 2019, Singh was driving a 2017 Freightliner and trailer owned by US Citylink when he attempted to cross the bridge, wrote Priebe.

"Upon information and belief, defendant's trailer was loaded with 17 pallets of frozen chicken which had recently been loaded onto the truck from Wayne Food in Danville, Arkansas," according to the lawsuit. "Even with the posted weight limit and even knowing that his truck and trailer weight over 30 tons more than the posted weight limit of six, defendant Singh attempted to cross the historic Petit Jean River Bridge."

The weight of the truck destroyed the bridge, leaving it submerged in the river, wrote Priebe.

Because the accident occurred in a wildlife management area, the Game and Fish Commission incurred expenses securing the area and assisting in removal of the truck, trailer and bridge, according to the lawsuit.

Singh had a history of "citations for unsafe and/or illegal driving practices," according to the lawsuit.

"Upon information and belief, based on the past driving record of defendant Singh and the obvious disregard for known and posted weight limits, defendant's actions rise to the level of grossly negligent, willful, wanton, reckless, malicious and/or intentional conduct," according to the lawsuit.