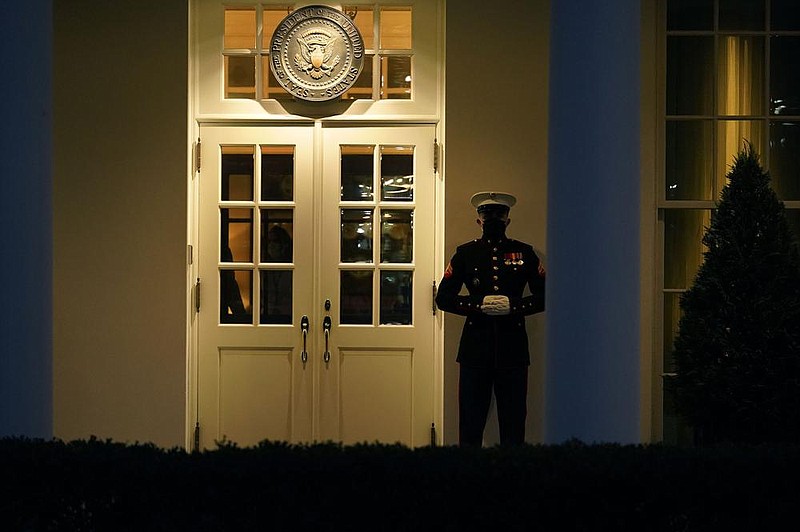 A Marine guard stands Wednesday evening at the entrance to the West Wing of the White House, signifying President Donald Trump was in the Oval Office, after the House impeached Trump. (AP/Gerald Herbert)

EDITOR'S NOTE: This is a transcript of President Donald Trump's video message released Wednesday from the White House Twitter account.

The video was made public hours after Trump was impeached a second time. The president's advisers had urged Trump to condemn the Jan. 6 mob violence and takeover of the Capitol and urge his supporters to stand down from any further rioting. In it, Trump made no mention of Wednesday's impeachment vote, President-elect Joe Biden or his upcoming inauguration.

My fellow Americans, I want to speak to you tonight about the troubling events of the past week.

As I have said, the incursion of the U.S. Capitol struck at the very heart of our republic. It angered and appalled millions of Americans across the political spectrum. I want to be very clear. I unequivocally condemn the violence that we saw last week. Violence and vandalism have absolutely no place in our country, and no place in our movement.

Tragically, over the course of the past year made so difficult because of covid-19, we have seen political violence spiral out of control. We have seen too many riots, too many mobs, too many acts of intimidation and destruction. It must stop. Whether you are on the right or on the left, a Democrat or a Republican, there is never a justification for violence, no excuses, no exceptions. America is a nation of laws. Those who engaged in the attacks last week will be brought to justice.

Now I am asking everyone who has ever believed in our agenda to be thinking of ways to ease tensions, calm tempers and help to promote peace in our country. There has been reporting that additional demonstrations are being planned in the coming days, both here in Washington and across the country. I have been briefed by the U.S. Secret Service on the potential threats. Every American deserves to have their voice heard in a respectful and peaceful way. That is your First Amendment right. But I cannot emphasize that there must be no violence, no lawbreaking and no vandalism of any kind. Everyone must follow our laws and obey the instructions of law enforcement.

I have directed federal agencies to use all necessary resources to maintain order. In Washington, D.C., we are bringing in thousands of National Guard members to secure the city and ensure that a transition can occur safely and without incident.

Like all of you, I was shocked and deeply saddened by the calamity at the Capitol last week. I want to thank the hundreds of millions of incredible American citizens who have responded to this moment with calm, moderation and grace. We will get through this challenge, just like we always do.

I also want to say a few words about the unprecedented assault on free speech we have seen in recent days. These are tense and difficult times. The efforts to censor, cancel and blacklist our fellow citizens are wrong and they are dangerous. What is needed now is for us to listen to one another, not to silence one another. All of us can choose by our actions to rise above the rancor and find common ground and shared purpose.

We must focus on advancing the interests of the whole nation, delivering the miracle vaccines, defeating the pandemic, rebuilding the economy, protecting our national security and upholding the rule of law.

Today, I am calling on all Americans to overcome the passions of the moment and join together as one American people. Let us choose to move forward united for the good of our families, our communities and our country.