Analysts give views on partnership in startup company with Ribbit Capital by SERENAH MCKAY ARKANSAS DEMOCRAT-GAZETTE | January 17, 2021 at 1:00 a.m. 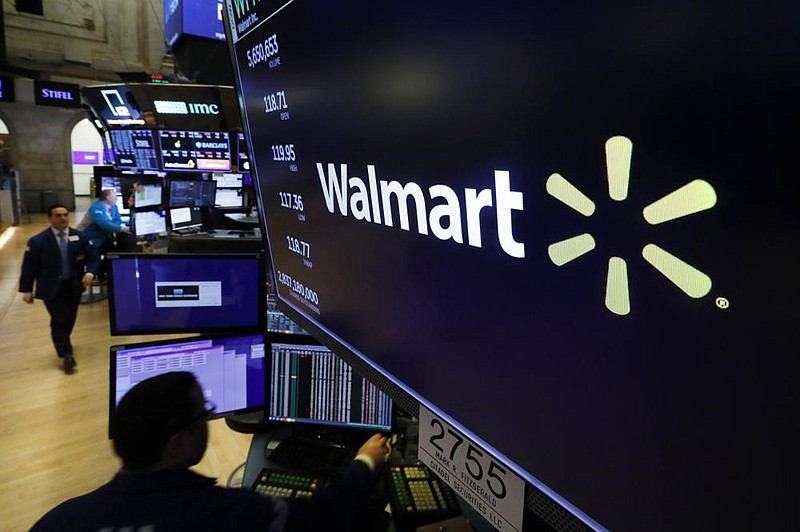 The logo for Walmart appears above a trading post on the floor of the New York Stock Exchange in this file photo. Last week, Walmart announced the creation of a financial technology firm but released few details. (AP)

Walmart Inc.’s recent creation of a financial technology firm is its latest move into the realm of banking and other monetary services.

The Bentonville-based retailer said Monday it is partnering in a startup with global investment company Ribbit Capital to offer “next-generation digital financial products” for employees and customers.

Walmart hasn’t revealed a name for the startup company, where it will be based, or any specifics about the kinds of products it will develop.

“The list of exact projects and timeline is still being developed,” a Walmart spokeswoman said Thursday. She said Walmart had no additional details to share.

Wayne Miller, executive director of The Venture Center in Little Rock, said Walmart “is pretty close-lipped about the actions they’re taking, especially when you’re looking at competing against a company like Amazon.com that’s also deeply into financial technology to support its client base.”

Drawing on his experience working with companies through The Venture Center, Miller also said it’s not unusual for a company like Walmart to start such a partnership before it has entirely figured out what it’s going to pursue.

Still, he added, “I would suggest that Walmart and Ribbit have a shortlist of things that they’re already thinking about.”

“But the other question I would ask as well is are they looking to make some big bets where there’s really entirely new technology or approaches they want to test or prototype, or are they trying to find existing technology,” Miller said. “They may need to find their way together on the initiatives and specific problems that they want to develop or source solutions for.”

Financial technology, often shortened to fintech, “seeks to improve and automate the delivery and use of financial services,” according to Investopedia.com. It does this through “specialized software and algorithms on computers and, increasingly, smartphones.”

Fintech has served to move financial products and services once handled by banks and salesmen toward mobile devices “or simply democratize them away from large, entrenched institutions,” according to Investopedia.com .

Jeff Amerine, founder and managing director of Fayetteville-based Startup Junkie Consulting, defined fintech as “primarily technology that automates some process in a way that’s different than the way they’ve done it up to that point.”

Amerine, who also teaches entrepreneurship at the University of Arkansas’ Walton College of Business, said any kind of advanced credit card, debit card or payment systems, including cryptocurrency, blockchain technology related to finance, and companies such as Pay-Pal, Stripe and Square, are all examples of well-established fintech companies.

“So you think about it in terms of how are payments taken, how are investments done, how you can apply artificial intelligence or machine learning to make better decisions on investments,” Amerine said.

As for why Walmart is going in this direction, Amerine said that with omnichannel sales, which include any combination of in-store, mobile and online services, “the fact is that an awful lot of your sales are not in store. They need to make it as easy as possible to do online transactions, mobile transactions, and those transactions need to be safe and secure.”

Walmart’s financial services to date have mainly been aimed at customers without a bank account or other banking relationships. Existing services, according to its Money Center website, include the Walmart Credit Card and Walmart Money Card, check cashing, money transfers, money orders, installment financing, check printing and Bill Pay.

Some of these existing services are offered through partnerships with a number of third parties.

And in October, Walmart formed an insurance brokerage to sell Medicare insurance plans through the open enrollment period.

A m e r i n e s a i d w h a t Walmart and Ribbit are going to do “in all likelihood is going to be consumer-facing, versus fintech for the benefit of enterprise or the banking side.”

But whatever they have in mind, he said, “when you see that kind of alignment between Walmart and another platform provider or accelerator, what large companies typically try to do is take advantage of the agility and the speed to market of a smaller, more agile group that might be able to more quickly innovate around things that are interesting.”

Though Walmart employs many thousands of innovation and information technology workers, Amerine said, it can be hard for such a large company to turn out anything quickly. So Walmart will often work with smaller companies with the agility to turn out a product much more quickly.

“I don’t have any direct knowledge that that’s the case [with Walmart and Rib-bit], but I suspect that’s what their thinking was here,” Amerine said.