Exercise 'snacks' take a few minutes or even mere seconds 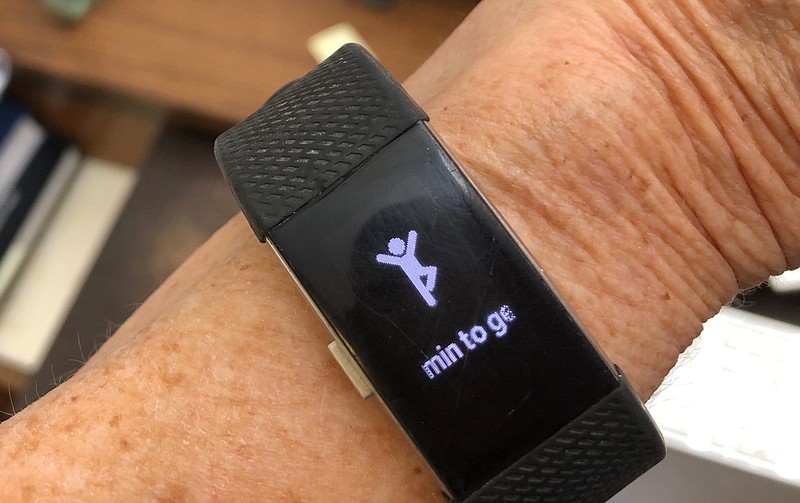 A fitness watch reminds its wearer to get up and move around. (Arkansas Democrat-Gazette/Celia Storey)

Make 2021 the year of the exercise snack.

Just as you might grab a handful of chips or nuts to break the monotony of your day, an exercise "snack" is a short burst of movement you can enjoy at home or in the office or outdoors. It can last for mere seconds or for several minutes. You can do it while talking on the phone or just because you want to take an hourly break from sitting in your chair. You don't even have to change your clothes.

A number of scientific studies show that exercise snacking several times a day leads to meaningful gains in fitness and overall health. A recent study concluded that even just four-second bursts of exercise have been shown to improve fitness.

"We've sort of been conditioned that exercise is this thing you do in a special place once you change into spandex, and it's very daunting for people," said Martin Gibala, professor of kinesiology at McMaster University in Ontario, whose lab has conducted several studies of exercise snacking. "Let's get people out of the mindset that exercise is this special thing we do. You can just be active, even if it means setting your watch to trigger you to do some squats or wall sits for one minute after an hour of sitting."

For many of us, the exercise snack has already become a part of pandemic life, even if we haven't been aware of it. Studies have shown that pandemic restrictions have slowed down many people. Average daily steps declined by about 5.5% during the first 10 days of a nation's pandemic lockdowns and by about 27% by the end of the first month, according to data from more than 450,000 users of a smartphone step-counting app.

But to compensate, many people found ways to keep moving in their homes. An April study by Yelp, the local search and reviewing site, found that interest in fitness equipment had risen by 500% between March and April in the United States. Workout bands, kettlebells and exercise bikes sold out in stores and online, and exercisers found workout apps and videos to help them keep moving while stuck at home. Some people took short walks to make up for losing the morning commute. Others did jumping jacks or wall pushups to break up hours of sitting at the laptop.

Several studies show that these small bursts of exercise can have a big effect on health. One recent study, published in Medicine & Science in Sports & Exercise, recruited 11 overweight men and women who were asked to sit for nine hours a day in cozy recliners, where they worked or watched television. They were all served three meals while sitting in their chairs. One day the participants never left the chair except to go to the bathroom. On another day, they left the chair just once an hour to race up three flights of stairs, which took about 20 seconds. Among the overweight participants, adding a 20-second burst of stair climbing to an otherwise sedentary day led to improvements in insulin sensitivity, a sign of metabolic health.

"We're better able to process nutrients if we break up our sitting with these short bursts of exercise once every hour," said Jonathan Little, associate professor in the school of health and exercise sciences at the University of British Columbia. "I don't think it replaces regular exercise, but we think you can get some bang for your buck with a small amount of these exercise bursts. Working from home could make these exercise snacks a lot easier. If you have an exercise bike, you theoretically don't need to change into exercise gear — in a 20-second burst, you're not going to sweat."

The study built on similar research at McMaster University that showed exercise snacks can lead to meaningful improvements in fitness.

In that study, a dozen exercisers raced up three flights of stairs just three times a day for three days a week. After six weeks of these 20-second snacks of exercise, the exercisers had increased their aerobic fitness by about 5%. They also showed improvements in leg power and could generate more power while cycling.

Gibala said the lesson from the research was that with a little effort, we could stay active anywhere under almost any circumstances — no matter how busy we were. The key to getting the benefit of brief exercise is to pick up the pace.

"You need to push it a little bit," Gibala said. "Get out of your comfort zone. If your normal exercise is walking around the block, pick it up a little bit. As you go about your day, as you're playing with grandchildren, as you're walking to the bus; the key is to encourage people to do it in a vigorous manner, and that may lead to some real health benefits."

Add exercise to your phone call.

A work or social call is a great time to add some activity to your day -- and the person on the other end of the phone doesn't have to know about it. Just get up and start walking around your home as you talk. If you have hand weights, do some arm exercises. Do a yoga pose or a wall sit while you chat.

Add music to your movement break.

Every hour or few hours, turn on a favorite song and dance or do jumping jacks or another physical activity. If you have children or another adult at home, ask them to join you. Adding music to a walk or just taking a short dance break will enhance the restorative benefits of exercise, said Kelly McGonigal, a health psychologist and lecturer at Stanford University and the author of "The Joy of Movement."

"Moving to music is one of the best ways to increase positive emotions and to connect with other people," McGonigal said. "Think about something like a movement break to music if you need more energy or if you need a big emotional reset."