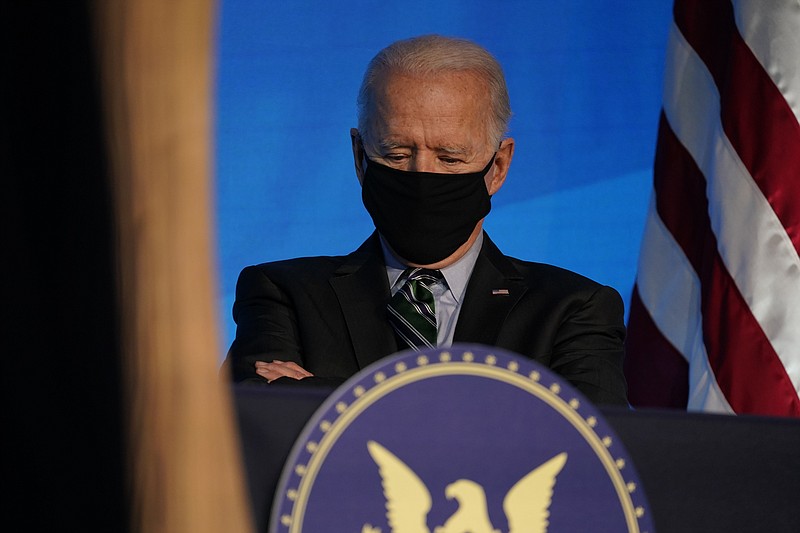 WASHINGTON -- President-elect Joe Biden will deliver an appeal to national unity when he is sworn in Wednesday and plans immediate moves to combat the coronavirus pandemic and undo some of President Donald Trump's most contentious policies, his incoming chief of staff said Sunday.

Biden intends a series of executive actions in his first hours after his inauguration, an opening salvo in what is shaping up as a 10-day blitz of steps to change national policy without waiting for Congress, incoming chief of staff Ron Klain said.

Klain told CNN's "State of the Union" that Biden, in his inaugural address to the nation, will deliver "a message of moving this country forward. A message of unity. A message of getting things done."

Biden will end Trump's restriction on immigration to the U.S. from some Muslim-majority countries, move to rejoin the Paris climate accord and mandate mask-wearing on federal property and during interstate travel. Those are among roughly a dozen actions Biden will take on his first day in the White House, Klain said Saturday in a memo to senior staff.

Other actions include extending the pause on student loan payments and actions meant to prevent evictions and foreclosures for those struggling during the pandemic.

"These executive actions will deliver relief to the millions of Americans that are struggling in the face of these crises," Klain said in the memo. "President-elect Biden will take action -- not just to reverse the gravest damages of the Trump administration -- but also to start moving our country forward."

Despite the flurry of expected executive actions, "full achievement" of Biden's goals will require Congress to act, Klain said in a memo, and that includes the $1.9 trillion virus relief bill that Biden outlined Thursday. Klain said Biden would also propose a comprehensive immigration bill to lawmakers on his first day in office.

[Video not showing up above? Click here to watch » https://www.youtube.com/watch?v=ggaYNoVJu7Q]

Some lawmakers have already balked at the aid bill's price tag, and immigration overhaul efforts over the past decade and a half have all stalled in Congress. Still, Klain expressed optimism.

"I think there are people in both parties we can work with to move this agenda forward," Klain said Sunday, noting voters elected a 50-50 Senate, where Vice President-elect Kamala Harris will serve as the tie-breaking vote. "We're going to have to find ways to get Democrats and Republicans to work together to get things done."

Providing a path to citizenship for millions of migrants in the U.S. illegally will be part of Biden's agenda, according to people briefed on his plans.

Ali Noorani, president of the National Immigration Forum and among those briefed, said migrants would be put on an eight-year path. There would be a faster track for those in the Deferred Action for Childhood Arrivals program, which shields people from deportation who came to the U.S. as children, and for those from strife-torn countries with temporary status.

On Thursday, the new president's second day in office, Biden would sign orders related to the covid-19 outbreak aimed at reopening schools and businesses and expanding virus testing, Klain said. Friday will see action on providing economic relief to those suffering the economic costs of the pandemic.

In the following week, Klain said, Biden would take additional actions relating to the criminal justice system, climate change and immigration -- including a directive to speed the reuniting of families separated at the U.S.-Mexico border under Trump's policies.

More actions will be added, Klain said, once they clear legal review.

Incoming presidents traditionally move swiftly to sign an array of executive actions when they take office. Trump did the same, but he found many of his orders challenged and even rejected by courts.

Klain maintained that Biden should not suffer similar issues, saying "the legal theory behind them is well-founded and represents a restoration of an appropriate, constitutional role for the President."

Biden's Inauguration Day address will seek to bridge the nation's deepening political divide by summoning support from people who didn't vote for him as well as those who did, according to advisers.

Incoming White House communications director Kate Bedingfield said Biden would use his address to the American people to appeal to those frustrated by the rancor of Washington and to explain how his administration will tackle the nation's challenges.

"I think you can expect that this will be a moment where President-elect Biden will really work to try to turn the page on the divisiveness and the hatred over the last four years and really lay out a positive, optimistic vision for the country, and lay out a way -- lay out a path forward that really calls on all of us to work together," she told "Fox News Sunday."

The inaugural address will be the highest-profile speech of Biden's nearly half century in politics. While he will address the difficult challenges ahead, his remarks are expected to be optimistic, stressing that with the right policies and a glimmer of comity in Washington, the country can find its way to a better position than before the pandemic.

The inaugural speech is likely to be positive in outlook and focus on competency, said Matt Teper, Biden's chief speechwriter at the beginning of his tenure as Barack Obama's vice president.

"People want to know someone's in charge, help is on the way, chaos is behind us now," he said. "There's a recognition that things aren't great right now, but there's definitely hope that they're going to get better."

Teper said he did not expect the speech to dwell on the past.

FIRST OF ITS KIND

Biden's inauguration as the 46th U.S. president will be unlike any other in modern history. Washington is now a fortified city, with rings of security around the Capitol, White House and National Mall and thousands of armed soldiers guarding against another attack by Americans who refuse to accept Trump's defeat.

Biden's aides said little was changed in the programming after the U.S. Capitol riot, with most curbs -- like the absence of guests on the National Mall -- dictated by the pandemic. Advisers said the president-elect has scripted a series of inaugural events built around the same unifying themes of post-partisanship and governmental competence that undergirded his campaign.

Biden's target audience is not the minority of the country that has rejected his election but the much larger group of Americans, including Trump voters, who are open to change.

"The inaugural gives us a fresh start, an ability to begin closing a very dark chapter in our history and start a new journey," said Stephanie Cutter, a co-executive producer of the inauguration. "Given recent events, there is more willingness on the other side of the aisle to reset and protect our democratic norms than there has been for more than four years."

The hope to broaden Biden's appeal has led the inaugural committee, which is raising millions of dollars from corporate and individual donors, to spend significantly on a production that will be experienced almost entirely as a streamed or broadcast video. Biden's inaugural address, the most momentous of the events, is just one part of the broader ceremony, which Biden aides have mostly refrained from calling a "celebration," given the nationwide turmoil.

There will be a Tuesday-night memorial ceremony for the nearly 400,000 people who have died of covid-19, with installations on the Mall as well as in towns and cities across the country.

The inaugural parade has been reimagined as a virtual affair that will span the country, with performances simulcast for online streaming and broadcast on major television networks. The missing throngs of supporters on the Mall will be replaced by thousands of flags meant to symbolize American support.

Biden also has arranged for a 90-minute prime-time special Wednesday, hosted by the actor Tom Hanks, with performers including Justin Timberlake, that is intended to form a vision of the America that Biden hopes to elevate.

Biden aides have promised to minimize the attention on Biden himself, though the new president is expected to appear on the broadcast from the White House.

"All of our programming is focused on lifting up everyday heroes during this pandemic," said Ricky Kirshner, a co-executive producer of the events who also organized the Democratic National Convention with Cutter. "There was an outpouring of big stars who wanted to participate and help uplift those heroes and celebrate the strength and resilience of the American people."

The stepped-up security efforts in recent days have caused minor tweaks to the program and the message, aides say. Biden's whistle-stop Amtrak ride to the capital city was scrapped, and the rehearsal on the Mall was moved from Sunday to today because of potential threats, according to a person involved in the planning who was not authorized to comment publicly.

Information for this article was contributed by Zeke Miller and Elliot Spagat of The Associated Press; by Michael Scherer of The Washington Post; and by Jennifer Epstein, Nancy Cook, Jennifer Jacobs, and Tony Czuczka of Bloomberg News (TNS). 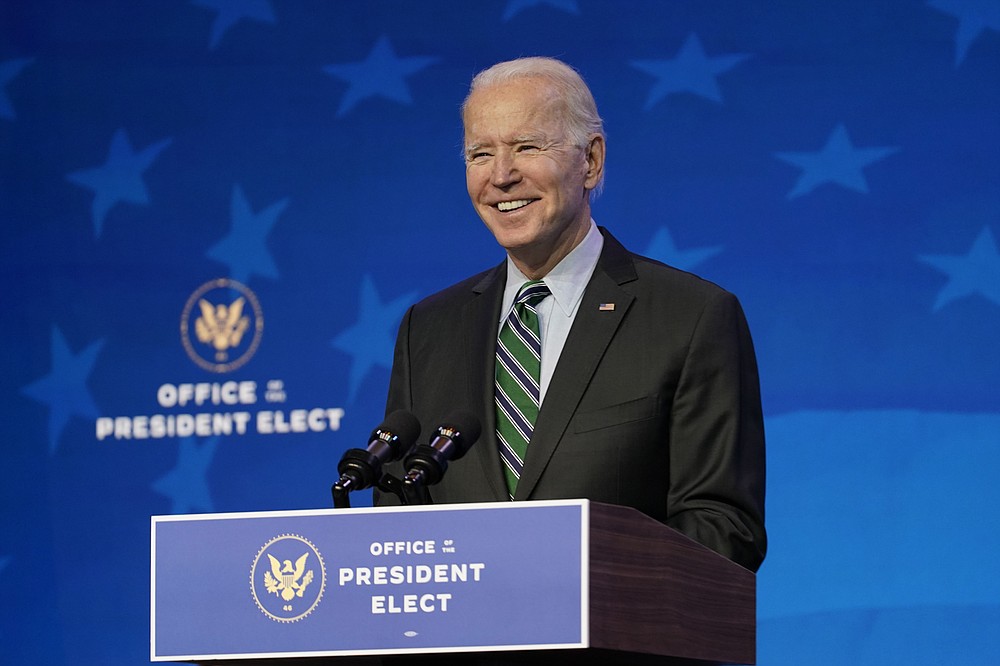