E for everyone: These family-friendly video games entertain kids and comfort adults 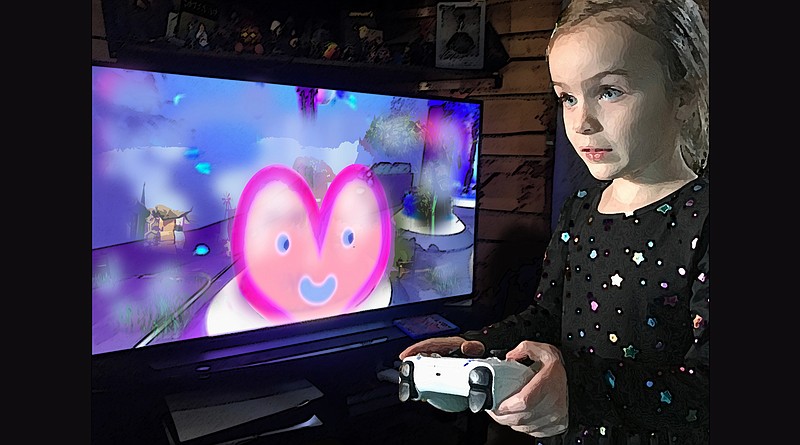 Among the flood of next-generation video games are some that are a delight to share with children and a comfort to play as an adult. None of them looks like this, though. This is just a drawing. (Democrat-Gazette illustration/Celia Storey)

Today's games provide many wonders, including complex stories with multiple quests and missions that provide the illusion of letting us stitch together a linear story. But they are also big, and sometimes overwhelming to start. I enjoyed my first hour with "Assassin's Creed Valhalla," a massive Viking-theme addition to the long-running open-world franchise, but stopped the game, knowing I wouldn't be able to fully explore its seemingly go-anywhere universe for a couple of weeks.

I found instead that I was craving more bite-size games. At least I thought I was.

That desire doesn't explain why I'm on my second tour of "Astro's Playroom," a game included with the PlayStation 5 and which many believed would be little more than a tech showcase for the new console.

At a time when giant, flashy games such as "Gears 5" or "Ghost of Tsushima" are receiving significant graphical upgrades for the Xbox Series X or the PS5, all I want for an hour or two each evening is the ridiculousness of "Bugsnax," a game with fruity critters that endlessly repeat their name in the most adorable fashion.

I've even found myself playing the original "Super Mario Bros.," repackaged in mini, hand-held form as a $50 collectible for nostalgia hunters, a nod to its pocket Game & Watch devices.

It may be a rescue-the-princess tale, but its narrative unfolds via wonder and imagination. What happens if we walk into this mushroom-like creature? Maybe we should jump on it? Can we interact with these blinking boxes? Oh, that one unleashed another mushroom! Should we grab it?

Throughout the start of "Super Mario Bros." we're constantly asking questions, and the game provides answers rather than roadblocks. It might appear simple but really it's elegant, a pure expression of play as a storytelling device that never gets old.

While playing the PS5's "Sackboy: A Big Adventure," another bright, approachable game where silliness takes prominence over plot, I had a revelation. It was one that seemed to explain why I was bringing Nintendo's "Super Mario Bros." to bed with me for my pandemic-timed insomnia, despite having played that game regularly for 30 years across multiple devices. It's not only relatively rare to have this many major family-focused games released at once, but they all, in varying ways, leave the storytelling to the player. In other words, they provide a space for us to ask, "I wonder if I can do this?"

"Astro's Playroom," if reviews and social media are any indication, seems to surprise and delight just about everyone. Boot it up, and it appears on the surface to simply be a showcase for the PS5 controller, which has enhanced, more realistic vibrating sensations as well the ability to increase or decrease the level of resistance players feel when pressing certain buttons.

That's all fun, but the game actually provides four fully fleshed out sections designed to mimic the innards of a powerful game console, complete with ridiculous music to match (if you play, expect to be humming a song that's an ode to a console's GPU while doing daily errands).

The titular character Astro, a rather corporate-looking toy robot, doesn't have the inviting personality of Mario, but Astro certainly has versatility. One particular area of the game, for instance, has Astro zipping up into a ball suit, then becomes a modern mash-up of pinball, bowling and "Marble Madness."

Another joyful area has Astro donning a spring suit and bouncing around a beachy spa, only it's less about relaxation than it is bounding up, around and among platforms. There's challenge here, especially in aiming Astro and using the PS5's motion controls, but nothing is too taxing as long as as we stop looking for rules and start wondering what's possible.

Such a frame of mind comes in handy when Astro dons ice skates and triple-axel-like jumps become more important than knocking out foes, or when rolling along pink poppy fields, where every bump in the garden brings an unexpected sound or reaction. It invites replays — and replay I have — because it encourages us to imagine how such a universe came into being.

Likewise "Sackboy: A Big Adventure," starring the handcrafted character first introduced in the "LittleBigPlanet" series, a pivotal franchise in establishing and furthering games that encourage player creation, a genre dominated today by "Minecraft." There's no player creation mode here, and "A Big Adventure" simplifies things a bit with a vague villain and quests to collect orbs, but I didn't mind the abstraction, at least not when it's this artfully drawn.

"A Big Adventure" is designed to look as though its words were all created by kids dreaming up a giant game of make-believe. Even when we get moments of backstory, they're delivered by a narrator who plays with toy versions of the characters we encounter throughout the game.

An abominable snowman is actually a furry, leather-looking ball that looks fit for backyard amateur sports. Elsewhere, a fairy tale kingdom feels as though it was constructed in a closet, using toilet paper and bath towels. And always surrounding us are large, carnival-like caricatures smiling, taunting and rocking back and forth as we bound through levels.

It reminded me most of Disneyland's It's a Small World, as characters move to a beat and hidden delights are alternately cutesy and weird. Take, for instance, an arctic shark dressed as a sushi chef demanding hot peppers or demonic shadow puppets dancing to "Uptown Funk" in an Arabian-style palace designed out of cardboard. If a level seems too short, that's because you didn't go off the beaten path. There's almost always something hidden above, below or in front of our Sackboy.

"Bugsnax," available for the PS4/5 and home computers, has a clearer story than "Astro's Playroom" or "Sackboy: A Big Adventure." It has us playing a Muppet-like creature in the role of a journalist sent to track the expedition of Lizbert, an adventurer who has stumbled upon some mysterious creatures that are part bug, part produce, but all sorts of lovable.

There's the fan favorite Bunger, a sort of beetle-meets-burger, or the Shishkabug, an ant that's also a shish kebab.

Lizbert has disappeared, so we're trying to find her and understand her secrets, but we're mostly capturing Bugsnax. Doing so, while not necessarily difficult, involves mini puzzles. Some follow trails of ketchup. A hot dog worm loves mustard. A tiny strawberry (Strabby) — just 400 calories — is easy to lure into a trap.

All the characters we encounter are going through some sort of existential crisis, which should provide fodder for conversation for those not playing alone. Some of it is, admittedly, full of grown-up sadness, such as unrequited crushes or a farmer whose spouse has left him, leaving him to construct a look-alike cactus to keep him company.

None of it is heavy-handed, though. It's mostly a game about seeing what happens when we're inquisitive. We, as a reporter, go off to wander and learn about a new world full of odd creatures. And that feels, after a stressful year for many, worth celebrating.

It's also what ties all these games together: a reminder that sometimes the most powerful tool is curiosity. 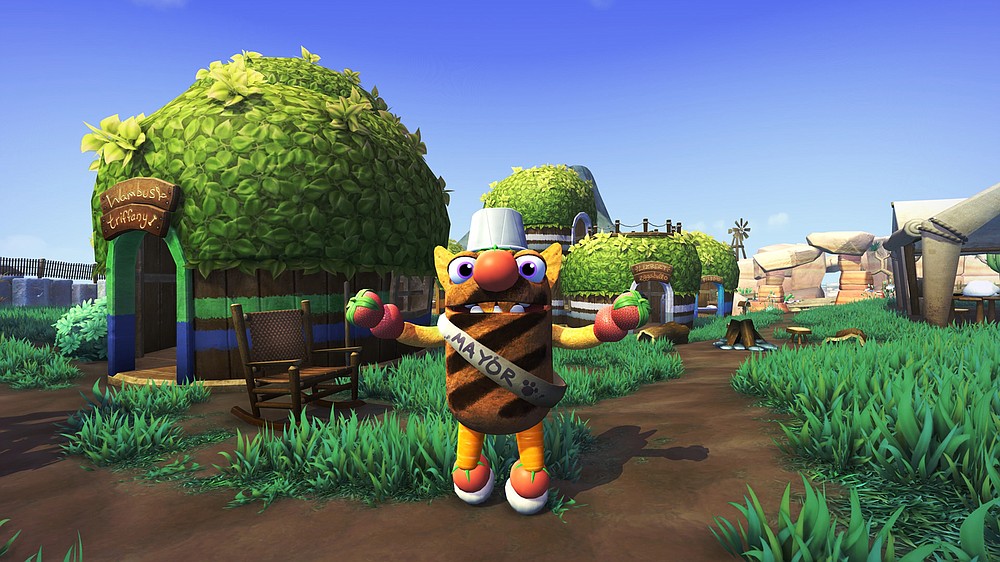 Residents of Snaktooth Island become what they eat in the "Bugsnax" video game. The Mayor has been eating Strabby snacks, and now heճ part strawberry. (Young Horses Games)
ADVERTISEMENT