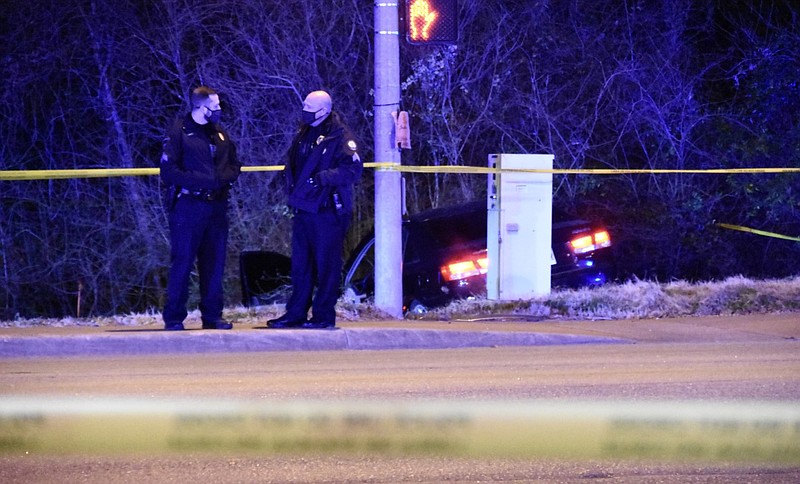 Little Rock Police Department officers talk at the scene of a shooting at the intersection of John Barrow and Colonel Glenn roads in southwest Little Rock on Sunday, Jan. 17, 2021.

Police have released the names of two 18-year-old men who were shot and injured Sunday night.

An 18-year-old man was reportedly struck in the leg while sitting at the intersection of Colonel Glenn and John Barrow roads, according to a Little Rock police report.

Officers responded shortly before 7 p.m. Sunday to a call regarding an accident with a possible shooting in the 4600 block of Colonel Glenn Road and noticed a vehicle was off the road with multiple bullet holes, according to an incident report. The driver was not with the vehicle, the report states.

Police said officers discovered Eric Woods of Little Rock just east of the vehicle with a gunshot wound in his left leg, the report states.

Woods told officers he heard gunshots while sitting at the intersection and was struck in the leg, but he did not see another vehicle or person, police said.

Woods was transported to Baptist Health Medical Center for treatment, according to police.

Officers recovered a firearm in the wood line of a nearby residence, the report states.

Another 18-year-old man was reportedly shot in the neck on Sunday, according to a separate police report.

Officers were called to Baptist Health Medical Center around 7:15 p.m., where Kenneth West of Little Rock walked into the emergency room with a gunshot wound in his neck, the report states.

According to police, West’s injuries were not life-threatening.

Police said later Sunday that they don't know for certain if the second gunshot victim was involved in the shooting at John Barrow and Colonel Glenn roads.

No suspects were named and no arrests had been made at the time of either report.

This story has been updated. It was originally published at 11:22 a.m.