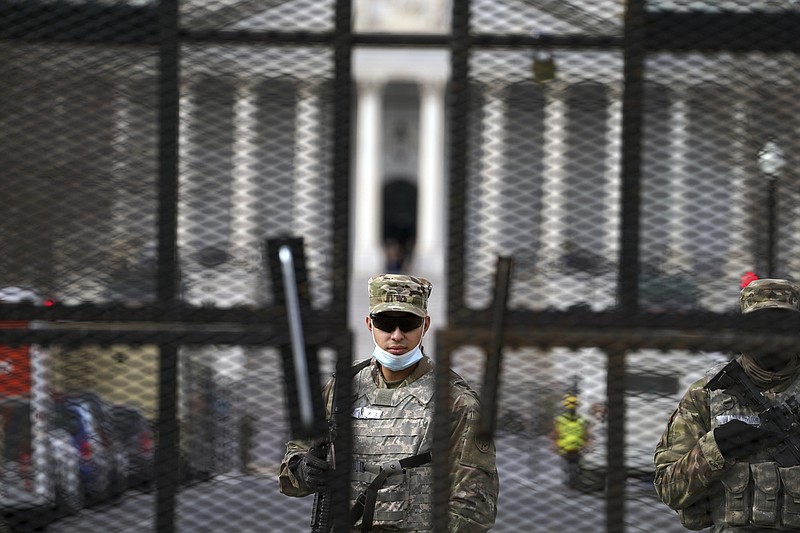 Members of the National Guard stand inside the security fencing at the Capitol ahead of the inauguration of President-elect Joe Biden and Vice President-elect Kamala Harris, Sunday, Jan. 17, 2021 in Washington. (AP Photo/John Minchillo)

Small groups of election and anti-government protesters -- some of them carrying rifles -- gathered outside heavily fortified statehouses around the country Sunday, outnumbered by National Guard troops and police brought in to prevent a repeat of the violence at the U.S. Capitol.

There were no reports of clashes by Saturday evening.

Security was stepped up in recent days after the FBI warned of the potential for armed protests in Washington and at all 50 state capitol buildings ahead of President-elect Joe Biden's inauguration Wednesday.

Crowds of only a dozen or two demonstrated at some boarded-up, cordoned-off statehouses, while the streets in many other capital cities remained empty. Some protesters said they were there to back President Donald Trump. Others said they had instead come to voice their support for gun rights or oppose government overreach.

"I don't trust the results of the election," said Michigan protester Martin Szelag, a 67-year-old semi-retired window salesman from Dearborn Heights. He wore a sign around his neck that read, in part, "We will support Joe Biden as our President if you can convince us he won legally. Show us the proof! Then the healing can begin."

[Video not showing up above? Click here to watch » https://www.youtube.com/watch?v=Yvt1sNerQ-g]

As the day wore on with no bloodshed around the U.S., a sense of relief spread among officials, though they were not ready to let their guard down.

The heavy law enforcement presence may have kept turnout down. In the past few days, some extremists had warned others against falling into what they called a law enforcement trap.

"I would love to say that it's because we've all taken a sober look in the mirror and have decided that we are a more unified people than certain moments in time would indicate," he said.

The security measures were intended to safeguard seats of government from the type of violence that broke out at the U.S. Capitol on Jan. 6, when far-right Trump supporters, galvanized by his claims of election fraud, overran the police and forced their way into the building while Congress was certifying the Electoral College vote.

The attack left a Capitol police officer and four others dead. More than 125 people have been arrested over the insurrection.

Dozens of courts, election officials and Trump's own attorney general have all said there was no evidence of widespread fraud in the presidential race.

On Sunday, some statehouses were surrounded by new security fences, their windows were boarded up, and extra officers were on patrol. Legislatures generally were not in session over the weekend.

Tall fences also surrounded the U.S. Capitol. The National Mall was closed to the public, and the mayor of Washington asked people not to visit. Some 25,000 National Guard troops from around the country are expected to arrive in the city in the coming days.

One of the protesters, who identified himself only as "Scott," said the gathering had nothing to do with the riot in Washington but instead was meant as a general protest against what they viewed as government tyranny.

"We're out here protesting the tyranny and, you know, the nationwide tyranny and stuff like that," he said.

Arkansas State Police cruisers blocked all the roads leading up to the Capitol and small contingent of law enforcement officers were on the grounds a short distance from the peaceful gathering. The protesters left around 2:30 p.m.

The roughly 20 protesters who showed up at Michigan's Capitol, including some who were armed, were significantly outnumbered by law enforcement officers and members of the media. Tensions have been running high in the state since authorities foiled a plot to kidnap Democratic Gov. Gretchen Whitmer last year.

At the Ohio Statehouse, about two dozen people, including several carrying long guns, protested outside under the watchful eyes of state troopers before dispersing as it began to snow.

Kathy Sherman, who was wearing a visor with "Trump" printed on it, said she supports the president but distanced herself from the mob that breached the U.S. Capitol.

"I'm here to support the right to voice a political view or opinion without fear of censorship, harassment or the threat of losing my job or being physically assaulted," she said.

Ohio Gov. Mike DeWine, a Republican, said he was pleased with the outcome but stressed that authorities "continue to have concerns for potential violence in the coming days, which is why I intend to maintain security levels at the Statehouse as we approach the presidential inauguration."

Utah's Republican Gov. Spencer Cox shared photos on his Twitter account showing him with what appeared to be hundreds of National Guard and law enforcement officers standing behind him, all wearing masks. Cox called the quiet protests a best-case scenario and said that many "agitating groups" had canceled their plans for the day.

At the Oregon Capitol, fewer than a dozen men wearing military-style outfits, black ski masks and helmets stood nearby with weapons slung across their bodies. Some had upside-down American flags and signs reading such things as "Disarm the government."

At the Texas Capitol, Ben Hawk walked with about a dozen demonstrators up to the locked gates carrying a bullhorn and an AR-15-style rifle hanging at the side of his camouflage pants. He condemned the insurrection at the U.S. Capitol and said he did not support Trump.

"All we came down here to do today was to discuss, gather, network and hang out. And it got blown and twisted completely out of proportion," Hawk said.

At the Nevada Capitol, where demonstrators supporting Trump have flocked most weekends in recent months, all was quiet except for a lone protester with a sign.

In Washington, 22-year-old Guy Berry of Gordonsville, Va., was arrested near the Capitol complex on Sunday, carrying three high-capacity magazines, 37 rounds of unregistered ammunition and a Glock 22 firearm, according to District of Columbia police.

Police said Berry was walking in the Capitol area just after midnight Sunday, with a firearm "clearly visible" in a holster. He was stopped near a police checkpoint, and officers concluded he was not permitted to carry a handgun in the District of Columbia. They then discovered that he had the magazines and ammunition, so they arrested him, police said.

He was arrested for carrying a pistol without a license, possession of a large-capacity ammunition-feeding device and unregistered ammunition.

In a separate incident, Capitol Police said they arrested a woman on Saturday evening for impersonating a police officer, stopping her at a security checkpoint in place for Wednesday's inauguration.

She presented what was identified as a military challenge coin, a pocket-size medallion that is typically given out by military commanders, Capitol Police said.

The woman, whose name was not released, said she was a law enforcement officer. But as she was being questioned, she drove off. She was stopped shortly thereafter and placed under arrest, police said.

More than a third of governors had called out the National Guard to help protect their capitols and assist local law enforcement. Several governors declared states of emergency, and others closed their capitols to the public until after Biden's inauguration.

Some legislatures also canceled sessions or pared back their work for the coming week.

Even before the violence at the Capitol, some statehouses had been the target of vandals and angry protesters during the past year.

Last last month, crowds in Oregon forced their way into the Capitol in Salem to protest its closure to the public during a special legislative session on coronavirus measures.

Amid the potential for violence in the coming days, the building's first-floor windows were boarded up and the National Guard was brought in.

"The state Capitol has become a fortress," said Oregon Senate President Peter Courtney, a Democrat. "I never thought I'd see that. It breaks my heart."

As images of National Guard troops circulate online, some in the United States have compared the capital to a war zone. The commentary has drawn pushback from people who have lived or worked in areas actually beset by conflict, who say such remarks are misleading and trivialize the reality of war.

"It's extremely degrading to people who have actually lived through war and foreign occupation and have actually seen tanks rolling down their streets and foreign soldiers occupying their land or their own soldiers deployed against them," said Jasmine el-Gamal, a former Pentagon adviser who worked in Iraq as a translator after the U.S. invasion in 2003. "That's a conflict situation. That's a war zone."

Resorting to these comparisons rather than putting events within U.S. historical context, she said, "does U.S. citizens a huge disservice and it does international viewers a disservice when they are trying to understand what's happening to the United States and how we got here."

Faysal Itani, an adjunct professor of Middle East politics at George Washington University, called conditions in Washington "qualitatively different" from conflicts in places like Lebanon, where he is from, and elsewhere in the Middle East.

But he was not surprised comparisons were being made.

"The Middle East has become the go-to aesthetic ... the template for breakdown and violence" in the United States, he said.

Americans, Itani said, often view their country in one of two modes: "It's either a pristine place ... that somehow functions according to different rules" than the rest of the world, "or it turns out it's imperfect and we're back in Baghdad."

The novelist Phil Klay, an Iraq War veteran, said he understood why people in the United States "are looking for the language to describe a circumstance that is truly bizarre and feels extremely unsettled."

But he said he meets this kind of description with "an eye roll."

"The situation is extremely serious in the context of American democracy," he told The Washington Post. "But I don't think that comparing D.C. to a war zone leads you to consider how we got to this particular place and what we need to do to respond to it." 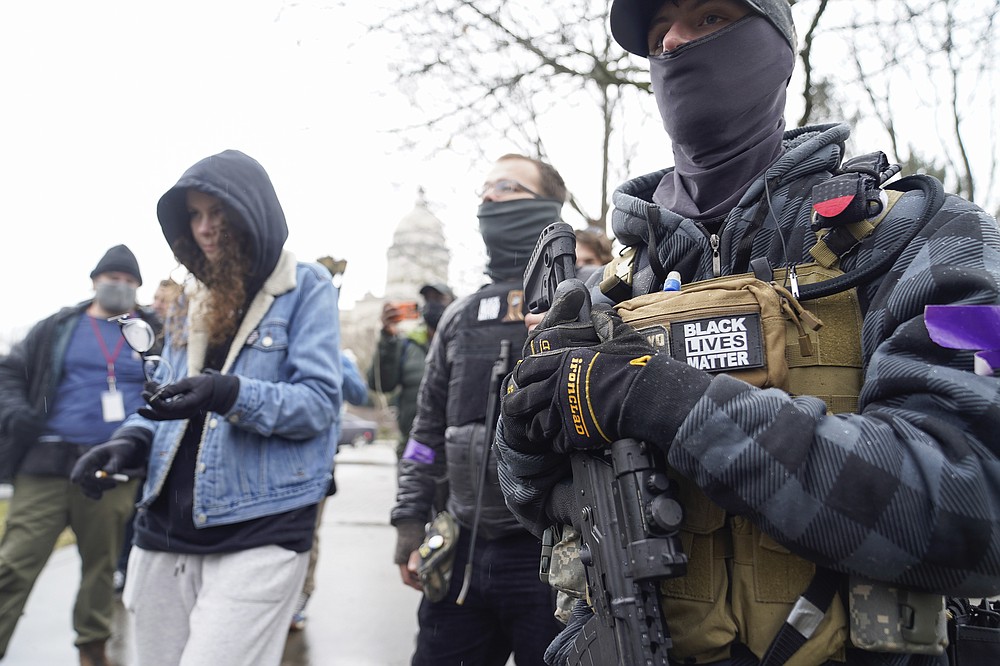 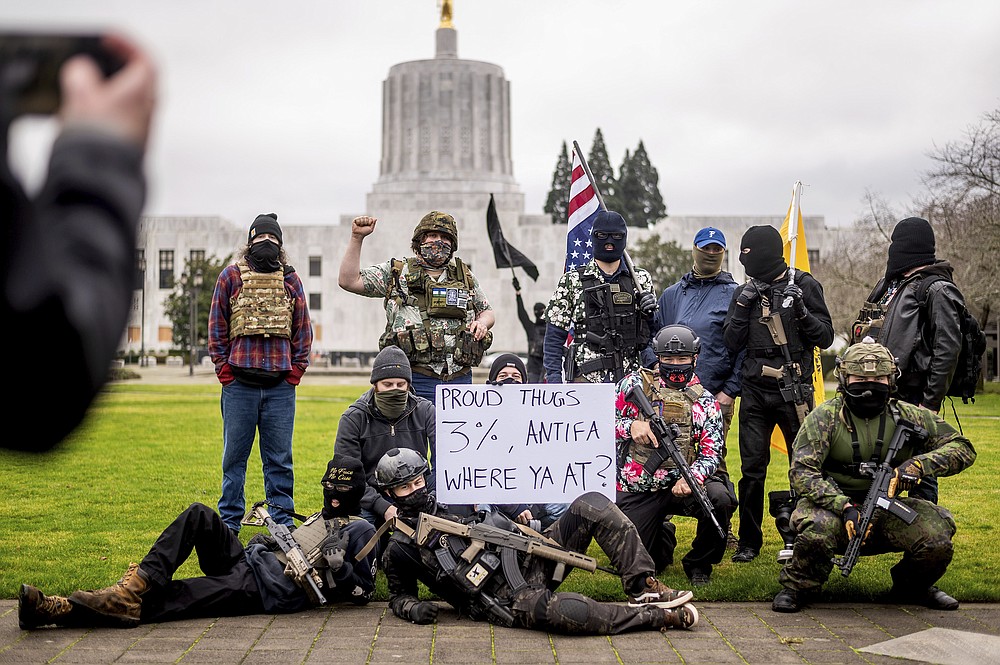 Armed protesters, who identified themselves as Liberty Boys, pose for fellow demonstrators' pictures outside the Oregon State Capitol on Sunday, Jan. 17, 2021, in Salem, Ore. The group said they want reduced government and do not support President Donald Trump or President-elect Joe Biden. (AP Photo/Noah Berger) 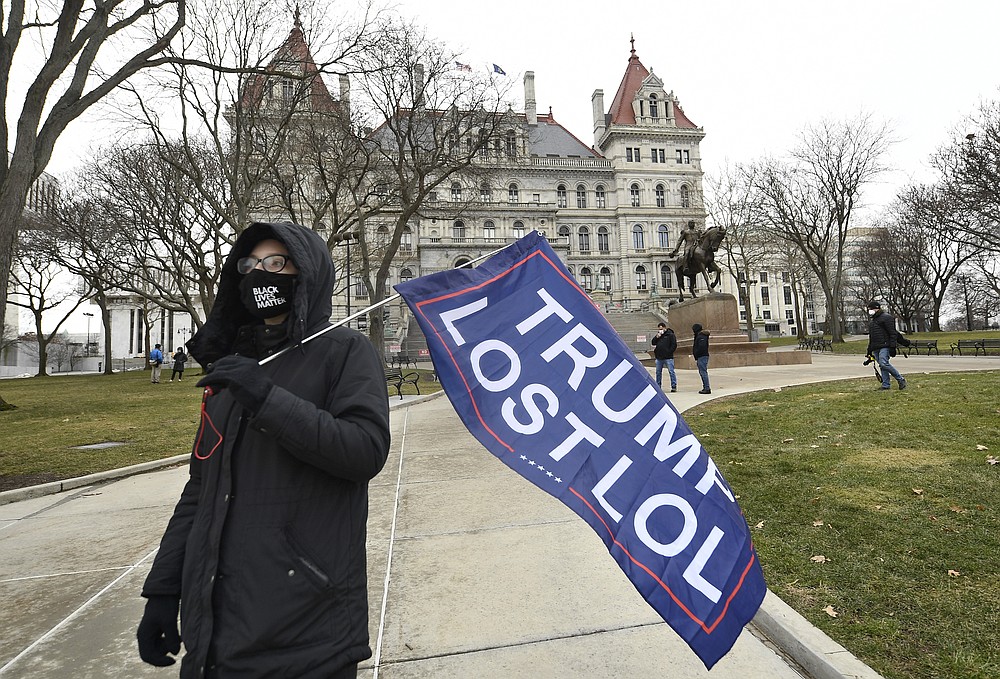 Christina Janowitz of Guilderland, N.Y., from the group "All Of Us' holds a flag while counter-protesting a Trump rally ahead of the inauguration of President-elect Joe Biden and Vice President-elect Kamala Harris at the New York State Capitol Sunday, Jan. 17, 2021, in Albany, N.Y. (AP Photo/Hans Pennink) 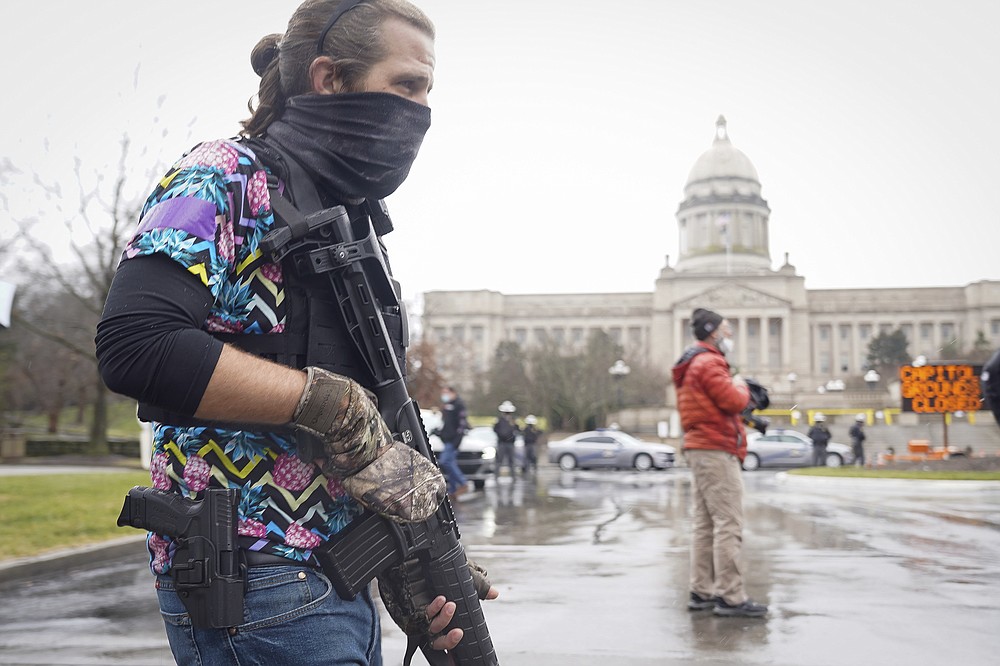 A Black Lives Matter activist carrying a semi-automatic rifle walks outside at the Capitol building in Frankfort, Ky., Wednesday, Jan 17, 2021. The Capitol, the Capitol complex, and surrounding grounds have been closed. (AP Photo/Bryan Woolston) 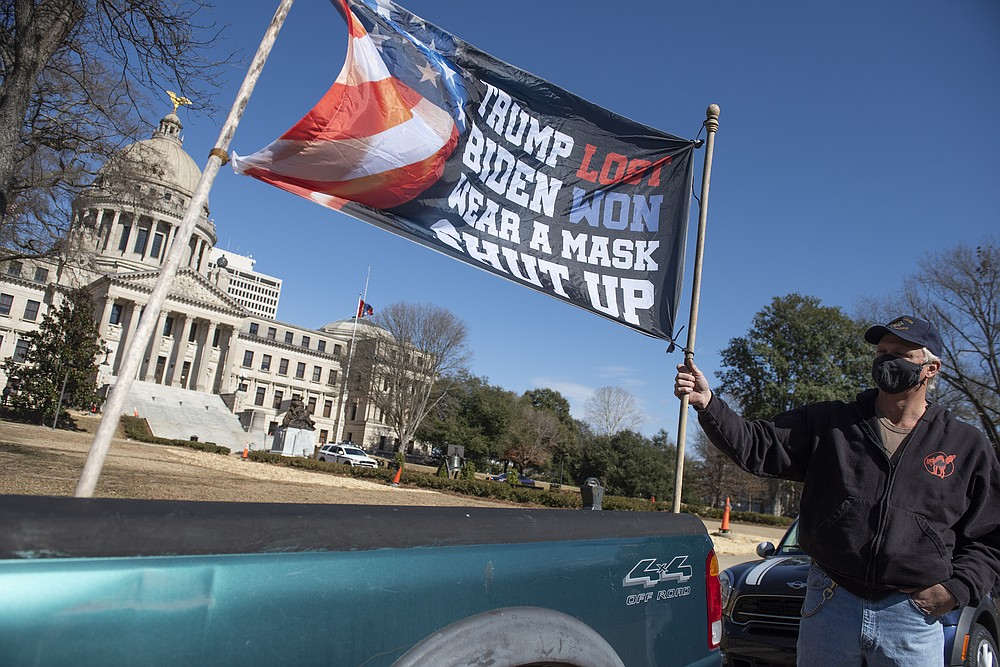 Dale Gibson, of Jackson, Miss., shows off the banner he planned to hold as a counter-protester if a pro-Trump rally materialized Sunday, Jan. 17, 2021. "But they done ruined my whole Sunday. Now I have to go and get drunk," Gibson said. Visibly enhanced security surrounded the Mississippi State Capitol in Jackson, Miss., after FBI warned armed protests had been planned at all 50 state capitols leading up to the inauguration of President-elect Joe Biden. (Barbara Gauntt/The Clarion-Ledger via AP) 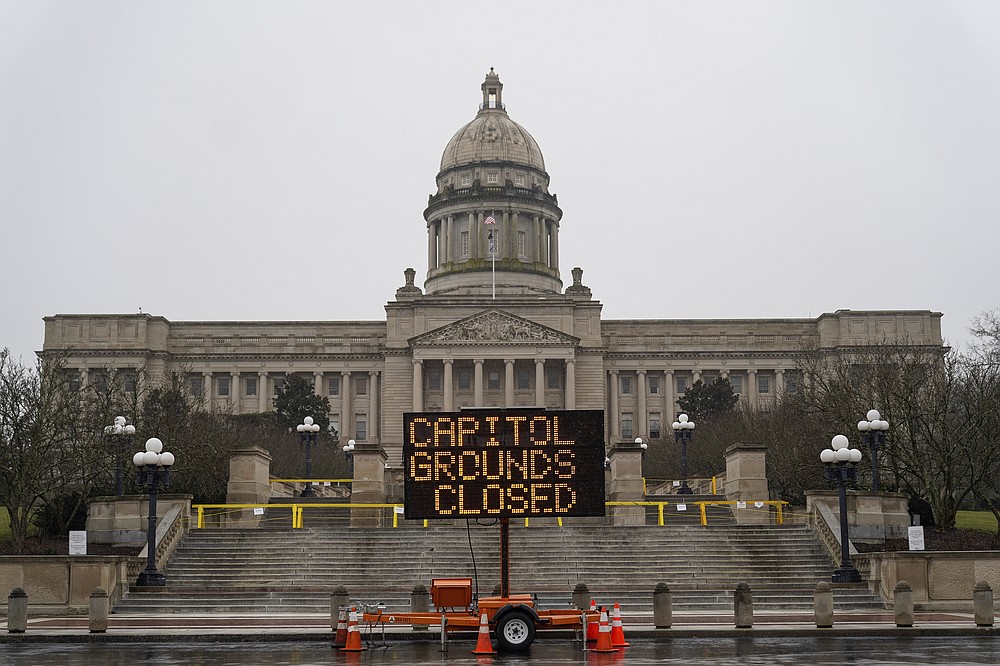 A sign displayed outside the Capitol building in Frankfort, Ky., advises that the grounds are closed, Sunday, Jan. 17, 2021. Some state capitols are closed, fences are up and extra police are in place at statehouses across the U.S. as authorities brace for potentially violent demonstrations over the coming days. (AP Photo/Bryan Woolston) 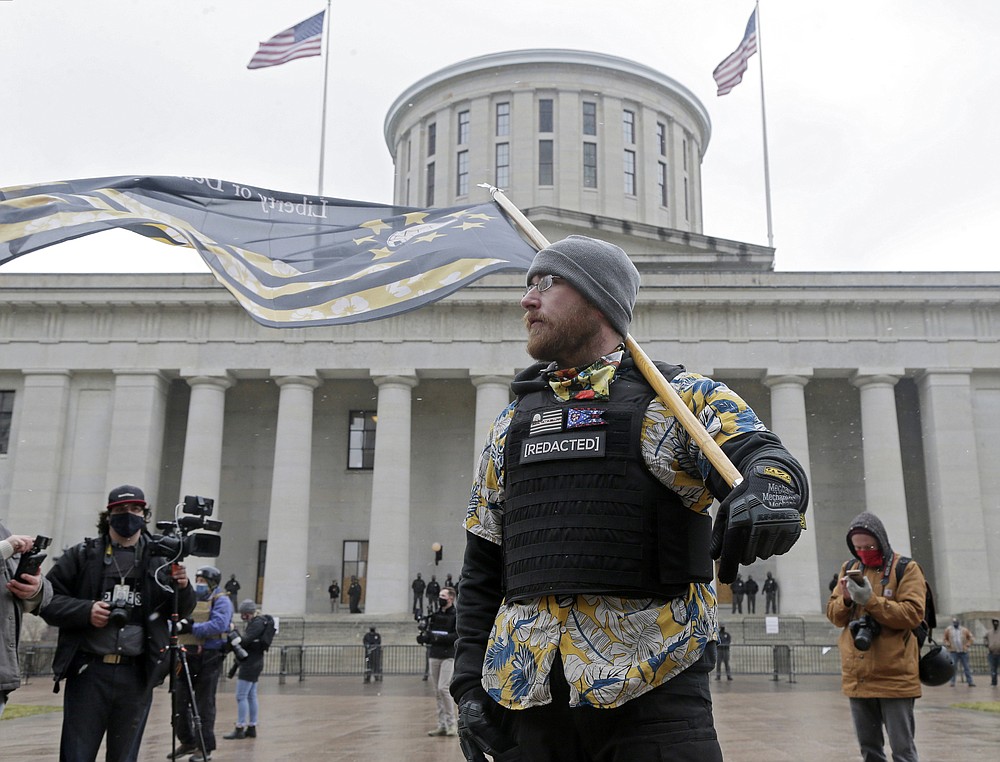 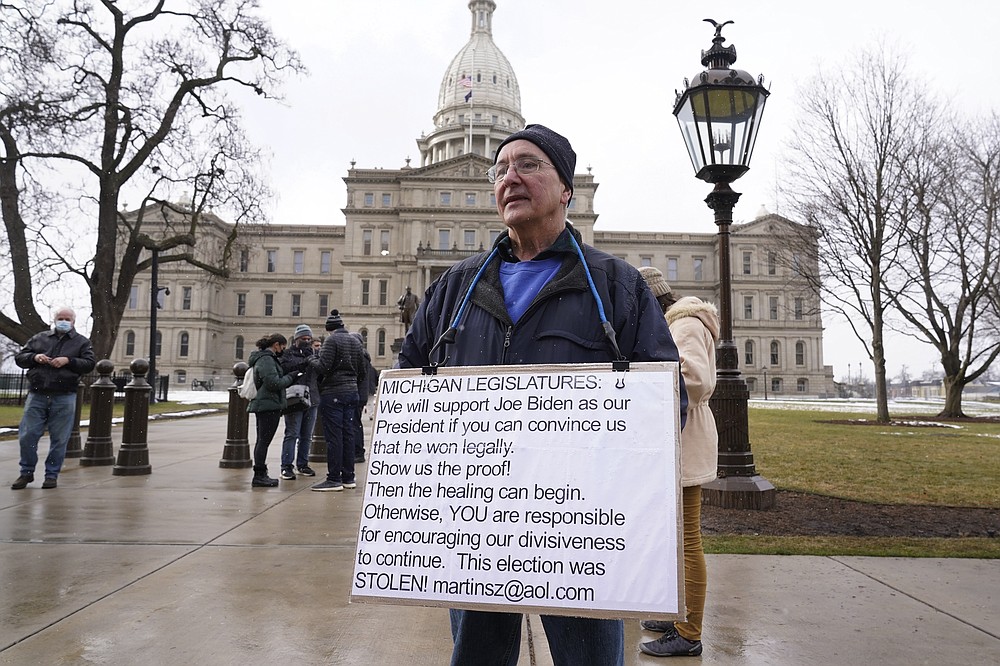 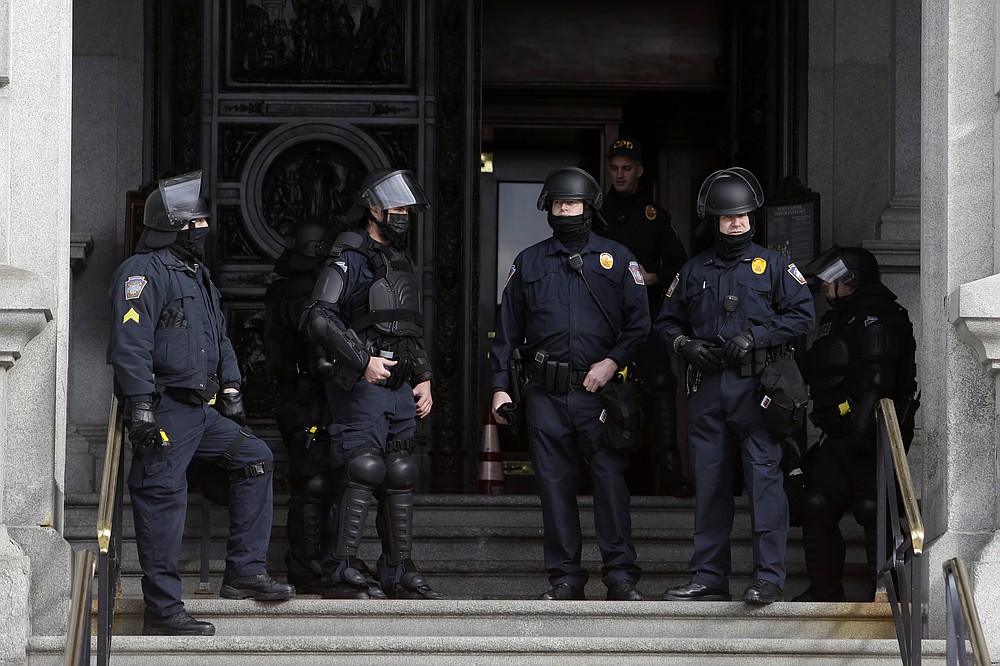