State gains trust with help from small pharmacies by Compiled by Democrat-Gazette Staff From Wire Reports | January 18, 2021 at 6:55 a.m. 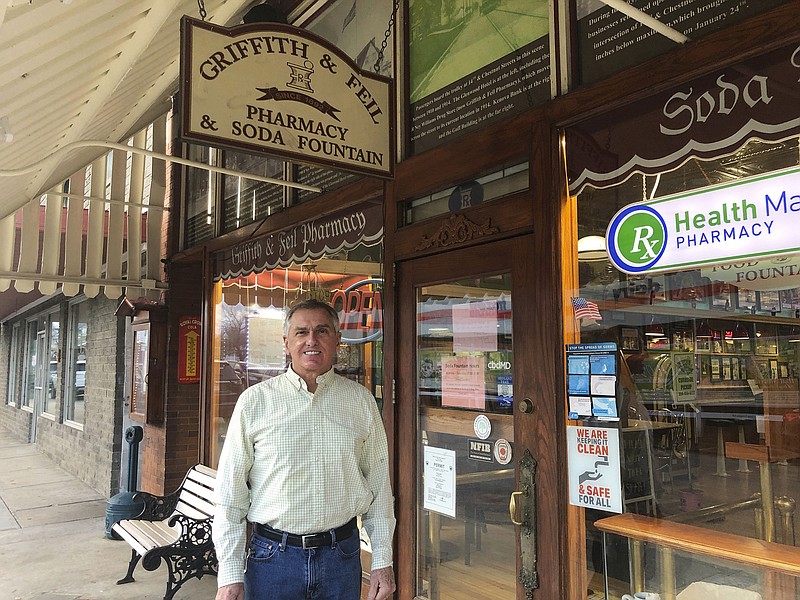 Ric Griffith poses for a portrait outside a pharmacy he owns Friday, Jan. 15, 2021, in Kenova, W.Va. Griffith & Feil is among 250 mom-and-pop pharmacies in West Virginia helping to vaccinate residents in the quest to banish the coronavirus pandemic. (AP Photo/John Raby)

KENOVA, W.Va. -- West Virginia has emerged as an unlikely success in the nation's otherwise chaotic vaccine rollout, largely because of the state's decision to reject a federal partnership with CVS and Walgreens and instead enlist mom-and-pop pharmacies to vaccinate residents against the coronavirus, which has killed more than 397,000 Americans.

More shots have gone into people's arms per capita across West Virginia than in any other state, with at least 7.5% of the population receiving the first of two vaccine doses, according to federal data.

West Virginia was the first state in the nation to finish offering first doses to all long-term care centers before the end of December, and the state expects to give second doses at those facilities by the end of January.

[Video not showing up above? Click here to watch » https://www.youtube.com/watch?v=55Mw3T5uvHI]

"Boy, have we noticed that. I think the West Virginia model is really one that we would love for a lot more states to adopt," said John Beckner, a pharmacist who works at the Alexandria, Va.-based National Community Pharmacists Association, which advocates for pharmacies across the country.

It's early in the process, but Republican Gov. Jim Justice proclaimed that the vaccine effort runs counter to preconceived notions about the Mountaineer State.

"Little old West Virginia, that was thought of for hundreds of years, you know, as a place where maybe we were backward or dark or dingy," Justice said last week.

Instead, it turns out that "West Virginia has been the diamond in the rough," Justice said Sunday on CBS' "Face the Nation."

Rather than relying on national chains, 250 local pharmacists set up clinics in rural communities. The fact that residents who may be wary of the vaccine seem to trust them makes a difference.

"As my uncle always told me, these people aren't your customers, they're your friends and neighbors," said Ric Griffith, the pharmacist at Griffith & Feil in Kenova, a town near the Kentucky state line.

The former mayor of Kenova recalled generations of patrons frequenting the shop, which is almost unchanged since the 1950s, with a soda fountain and jukebox in the front and prescriptions in the back.

Griffith, 71, began taking over the pharmacy from his father in the early 1990s and was elected to the House of Delegates as a Democrat last year. His daughter, Heidi Griffith Romero, 45, followed into the family business and is also administering shots.

Holding a vaccination clinic at the town high school, he recalled his uncle telling him that he lost four classmates to the 1918 flu pandemic, which killed more than 50 million people worldwide.

"And it was a tragedy that I thought I would never be involved with," he said, taking a break from giving vaccinations to teachers age 50 and over.

When Mark Hayes, a middle school guidance counselor in Kenova, walked up to receive his first dose, he spotted Griffith, who holds local celebrity status for hosting an extravagant annual Halloween pumpkin-carving party that attracts thousands of people.

"I recognized him right away," Hayes said. "'The Pumpkin King? Are you giving me the shot?'"

Kevin Roberts, a 59-year-old school bus driver in Kenova, said "it makes a difference" for a pharmacist he knows to administer the shots. "I hope that a lot of these skeptics change their mind," he said.

Officials also credit a 50-person command center at the state's National Guard headquarters in the capital, Charleston. Inside a cavernous hall, leaders of the vaccine operation and state health officials sit between plexiglass dividers to oversee shipments of the precious doses to five hubs. From there, deliveries go to drugstores and local health departments.

CVS has so far declined to work with state officials on vaccinating people at its stores, but Walgreens is participating and has joined in to hold clinics at some nursing homes, officials said.

The federal partnership involving both companies would have allowed U.S. officials to dictate the terms of nursing home vaccinations, said Marty Wright, the head of the West Virginia Health Care Association, which represents health care companies.

"Expanding eligibility to all of the vulnerable is the fastest way to protect the vulnerable," Azar said Tuesday at a meeting for Operation Warp Speed, the Trump administration initiative to develop and deliver a covid-19 vaccine. Azar also highlighted Connecticut as a bright spot in the vaccine rollout.

Meanwhile, President-elect Joe Biden's goal of vaccinating 100 million Americans during his first 100 days in office got a seal of approval from the country's top infectious disease expert on Sunday.

"The feasibility of his goal is absolutely clear, there's no doubt about it," Dr. Anthony Fauci, director of the National Institute of Allergy and Infectious Diseases, said on NBC's "Meet the Press."

He also voiced approval for steps Biden has outlined. The president-elect promised Friday to boost vaccine production and distribution as the coronavirus outbreak continues to surge.

Since last month, the U.S. has been using vaccines produced by Pfizer and Moderna. Fauci said he expects drugs made by Johnson & Johnson and AstraZeneca to get federal approval soon.

"We're weeks away, not months away," he said.

Speaking on CNN's "State of the Union," incoming White House Chief of Staff Ron Klain said the coronavirus pandemic will get worse before it gets better, projecting another 100,000 deaths from covid-19 in the first five weeks of Biden's administration.

Klain said Biden was inheriting a dire situation and that even with vaccines, "It's going to take a while to turn this around."

Fauci also said on "Meet the Press" that the confusion over a federal stockpile of covid-19 vaccines to help ramp up state distribution is likely a "misunderstanding."

Fauci said that Gen. Gustave Perna, who is overseeing distribution, explained that the government had initially held back some doses as Americans received their first of two shots, but it stopped doing so "when it became clear that the 'cadence' of the flow of doses was really going to be consistent and reliable."

Several governors have expressed exasperation after being assured last week that the federal government had enough vaccine stockpiled to speed up or expand state rollouts.

The governor recently lowered the age of eligibility for members of the general public to 70.

The efforts have not been without errors. The Boone County Health Department was barred from distributing the vaccine last month after it mistakenly gave 44 people an antibody treatment instead of vaccines.

The state began vaccinating school workers age 50 or older less than two weeks ago. The governor wants in-person learning to resume at as many schools as possible by Tuesday, long before teachers will have received their second vaccine doses.

As of Sunday, more than 130,100 first doses had been administered, and 23,066 people had received both shots in a state with a population of about 1.78 million people. Nearly 55,800 of the first doses had gone to residents age 65 and older.

Mitchel Rothholz, who leads immunization policy at the American Pharmacists Association, said other governors would be wise to enlist local pharmacies.

"Especially at a time when you have vaccine hesitancy and concerns in vaccine confidence, having access to a health care provider like a community pharmacist provides a comfort level to the patients and communities," Rothholz added.

Information for this article was contributed by Cuneyt Dil, John Raby and staff members of The Associated Press; and by Shant Shahrigian of the New York Daily News. 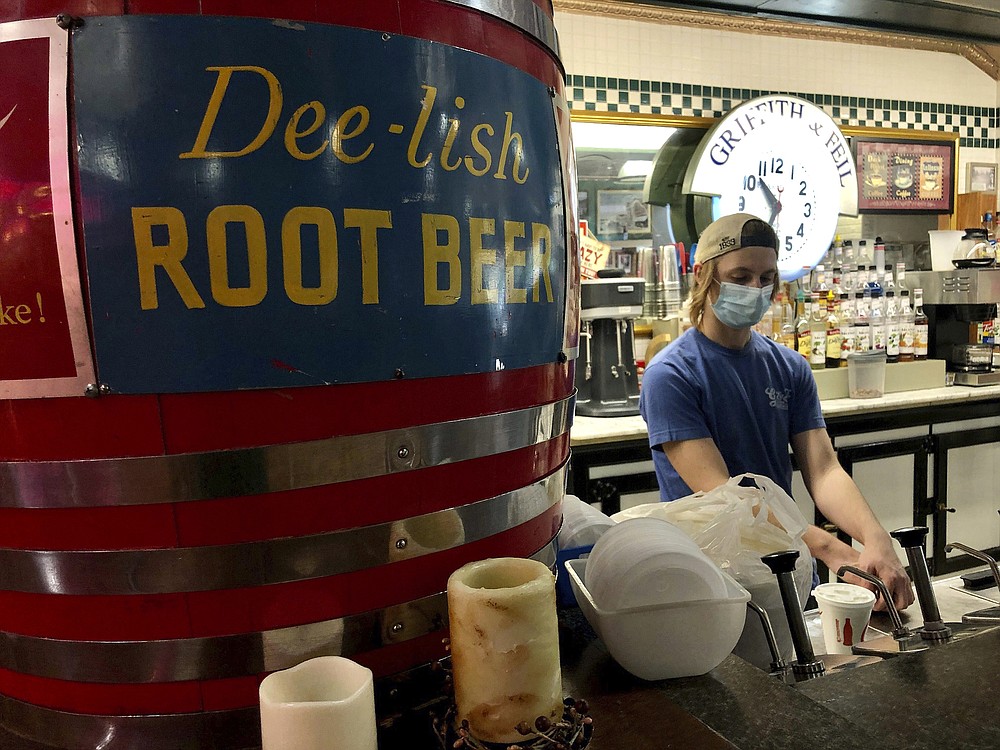 An employee works behind the food counter at the Griffith & Feil pharmacy Thursday, Jan. 14, 2021, in Kenova, W.Va. Griffith & Feil is among 250 mom-and-pop pharmacies in West Virginia helping to vaccinate residents in the quest to banish the coronavirus pandemic. (AP Photo/John Raby) 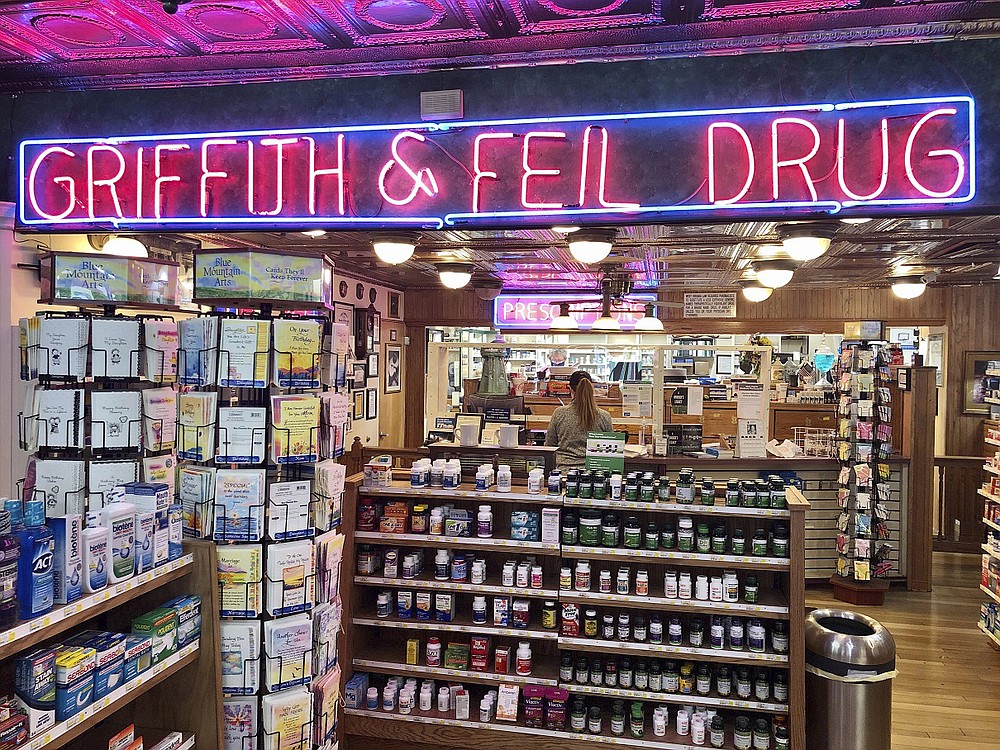 A sign inside Griffith & Feil pharmacy hangs Thursday, Jan. 14, 2021, in Kenova, W.Va. Griffith & Feil is among 250 mom-and-pop pharmacies in West Virginia helping to vaccinate residents in the quest to banish the coronavirus pandemic. (AP Photo/John Raby) 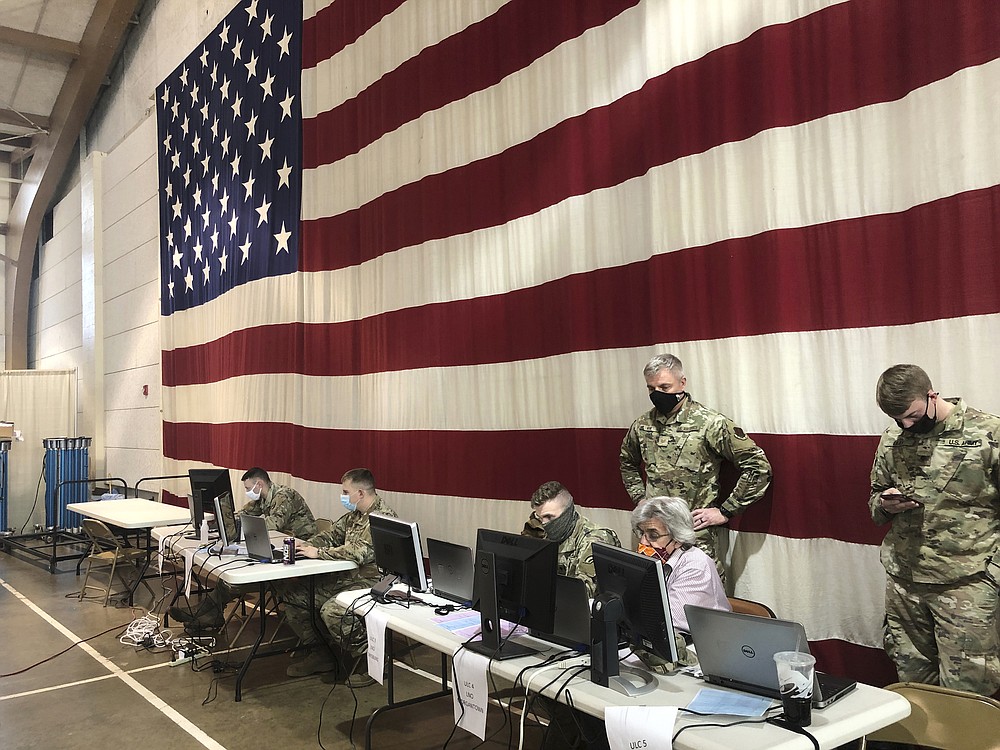 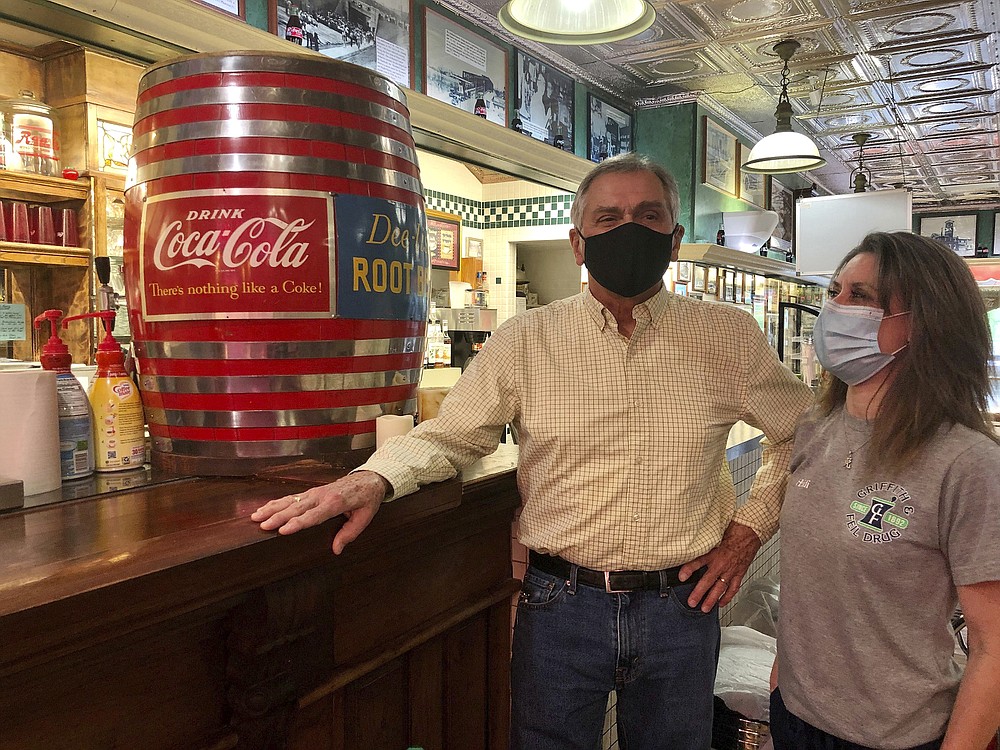 Pharmacists Ric Griffith and his daughter, Heidi Griffith Romero, stand in their family's business Friday, Jan. 15, 2021, in Kenova, W.Va. Griffith & Feil is among 250 mom-and-pop pharmacies in West Virginia helping to vaccinate residents in the quest to banish the coronavirus pandemic. (AP Photo/John Raby) 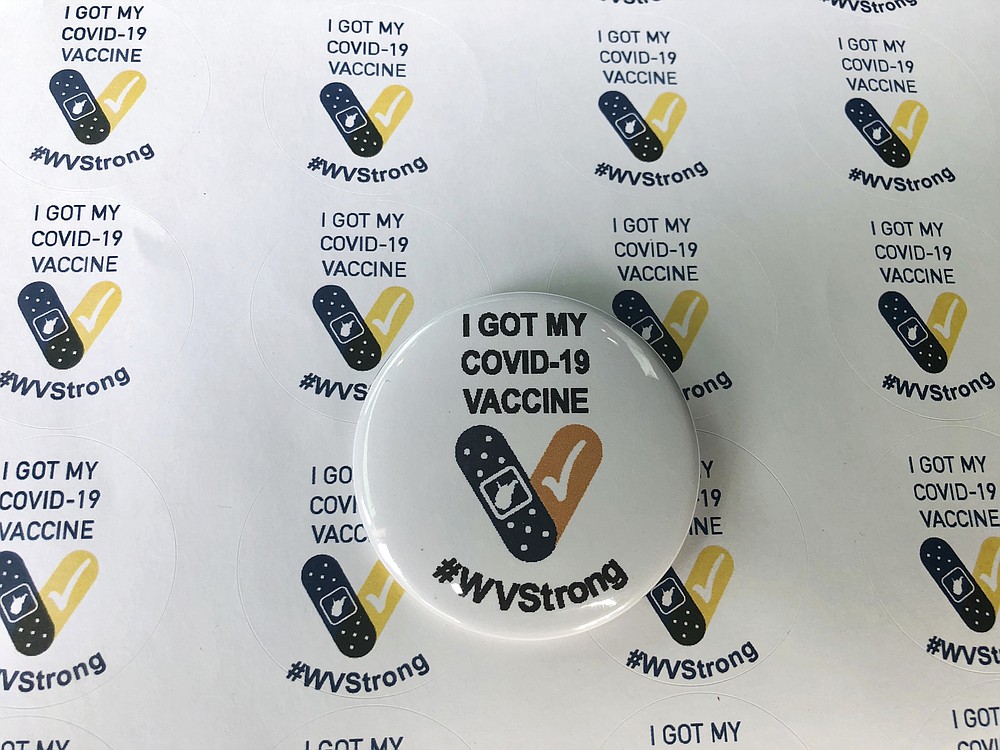 Stickers and a button given to people who receive their COVID-19 vaccines are displayed Thursday, Jan. 14, 2021, at the National Guard Armory in Charleston, W.Va. West Virginia has emerged an unlikely success in the nation's otherwise chaotic vaccine rollout. (AP Photo/John Raby) 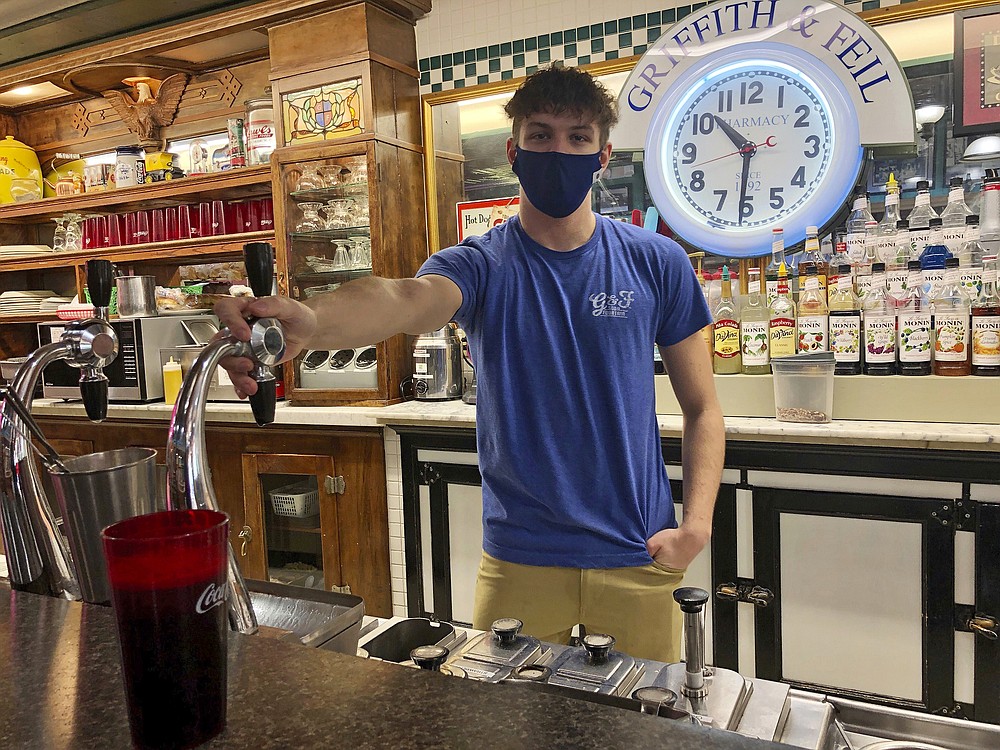 Parker Elmore works the soda fountain behind the lunch counter at the Griffith and Feil pharmacy Thursday, Jan. 14, 2021, in Kenova, W.Va. Asked if anyone ever called him a soda jerk, a person who runs a soda fountain, Elmore replied, "Sometimes people come in here and say, 'What's up, jerk?'" (AP Photo/John Raby) 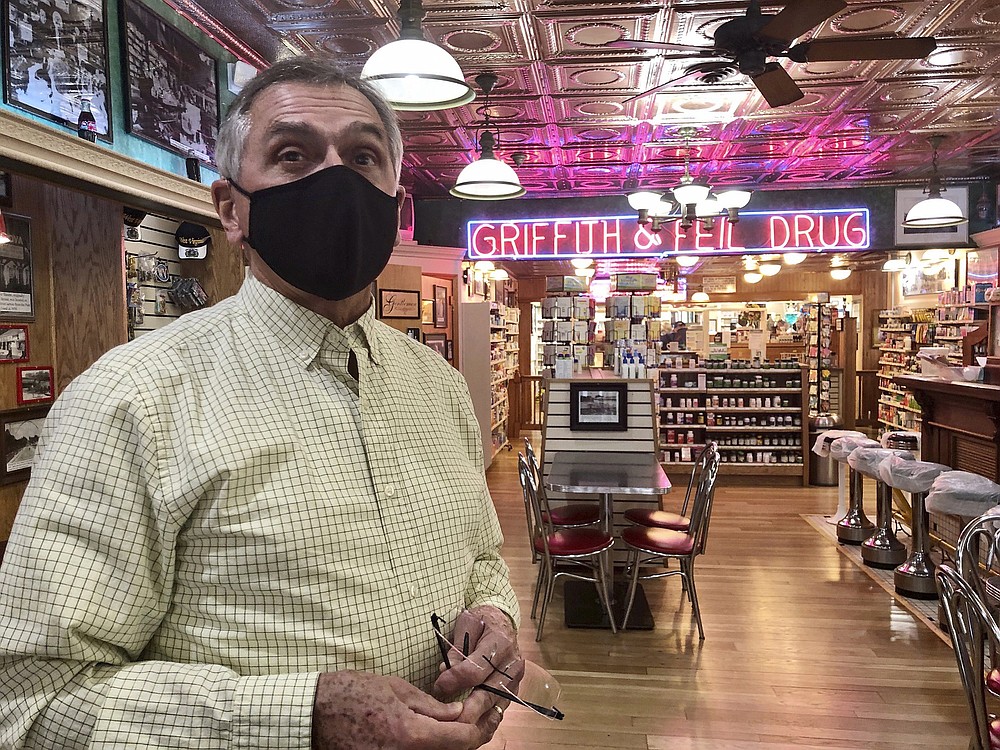