Arkansas guardsmen on stand-by at inauguration 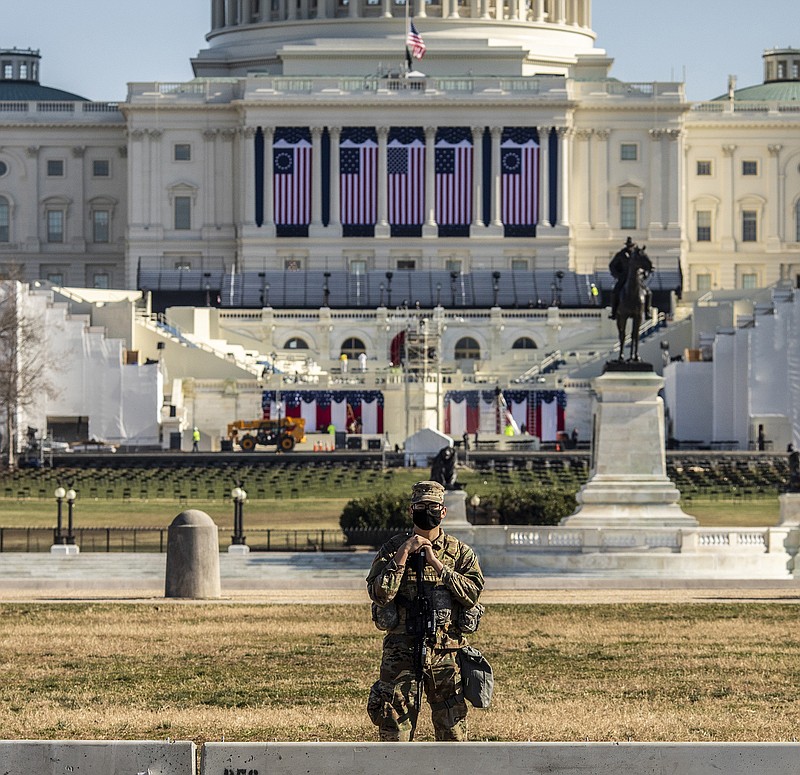 FILE — National Guard troops at the Capitol in Washington in this Jan. 14, 2021 file photo. The inauguration stage is in the background at the base of the Capitol. (Jason Andrew/The New York Times)

WASHINGTON -- While service members from other states were patrolling the U.S. Capitol building, members of the Arkansas National Guard spent most of Monday at the D.C. Armory.

Eager to serve, they waited much of the day for orders before returning to their hotel early Monday evening.

If all goes well, the Arkansans expect to be dispatched to Capitol Hill later today. Whatever the task, they're ready to serve, said Sgt. Dylan Parker, a public affairs officer from Maumelle.

"From the lowest-ranking soldier to the highest-ranking officer here, I've seen very good morale. You know, everybody's got good spirits and they're glad to be here serving their country and their state," he said.

Gov. Asa Hutchinson last week approved the mission; roughly 500 guardsmen were mobilized and deployed. They left Arkansas on Sunday and are scheduled to return by the end of January. Most are from the 142nd Field Artillery Brigade, which is headquartered in Fayetteville.

The 189th Airlift Wing of the Arkansas Air National Guard, based at Little Rock Air Force Base, handled transportation, flying the guardsman in C-130s to Joint Base Andrews.

In a city lined with landmarks, the 80-year-old armory is hardly a tourist attraction. Two miles east of the Capitol, it sits beside Robert F. Kennedy Memorial Stadium, home of the Washington Redskins from 1961-96. Though unglamorous, the armory is spacious, with enough room to process a small army.

More than 25,000 National Guardsmen from across the country have been summoned to Washington as the nation prepares for what, traditionally, has been a peaceful transfer of power. National Guardsmen must undergo a security screening prior to President-elect Joe Biden's inauguration. On Wednesday at noon, the 78-year-old Democrat will become their commander in chief.

In a statement Monday, acting Secretary of Defense Christopher Miller explained how the process will work for guardsmen from across the country.

"As is normal for military support to large security events, the Department will vet National Guardsmen who are in Washington, D.C.," he said. "While we have no intelligence indicating an insider threat, we are leaving no stone unturned in securing the capital."

This type of scrutiny isn't unusual for "significant security events," Miller said. "However, in this case the scope of military participation is unique.

"We appreciate the support of the FBI in assisting with this task and for each of the more than 25,000 Guardsmen who answered their Nation's call and rapidly deployed to the NCR [National Capital Region]," he said.

"The D.C. National Guard is also providing additional training to service members as they arrive in D.C. that if they see or hear something that is not appropriate, they should report it to their chain of command," he said.

Security in the capital has ramped up considerably since Jan. 6, when supporters of President Donald Trump stormed into the House and Senate chambers, temporarily halting certification of Biden's victory in the Electoral College. Tall fences now separate Capitol Hill from the rest of the city.

Monday, armed guardsmen stood guard outside the Capitol, the U.S. Supreme Court building and the Library of Congress. Clad in camouflage, they clutched M-4 carbines and kept watch over an eerily quiet city. At least 13 subway stops are closed due to security concerns, major thoroughfares are empty and the National Mall is off limits.

Monday, civilian workers were hastily installing razor wire atop the fences on Capitol Hill. Inside the Capitol on Monday, troops kept watch as well, while others tried to sleep. Cots, including some from the Federal Emergency Management Agency, dotted the hallways and much of Emancipation Hall. If all goes as planned, there'll be Arkansas National Guardsmen occupying some of those cots between now and Thursday morning.

In addition to serving with guardsmen from other states, they'll work alongside the Secret Service, the U.S. Capitol Police and other law enforcement agencies. Up until now, things haven't been particularly stressful.

"It's been pretty laid back so far," said Spc. Jordan Hendrix. The 21-year-old Fayetteville guardsman said she came to Washington "for the mission: To support the peaceful transition of power."

"I think it's pretty important," she said. "It's essentially, eventually, going to be a big part of history."

Spc. Matayo Pearson, 23, said the assignment is "a great opportunity to see our nation's capital." It's his first visit.

"So far, it seems like a great place. I definitely want to come back and visit," the Bentonville guardsman said.

Staff Sgt. Chauncey Eggebrecht, 34, is from Gravette; the same town, he noted, as one of the people who attacked the Capitol. It's also the hometown of the governor who approved this week's mission. Hutchinson, who acknowledged Biden's victory before most other Republicans, plans to attend Wednesday's inauguration.

Eggebrecht isn't sure how he'll spend the day, but he said he welcomes the opportunity to serve. "I want to be here because it's my duty as a guardsman," he said. "Whenever my state calls, it's my job to answer."