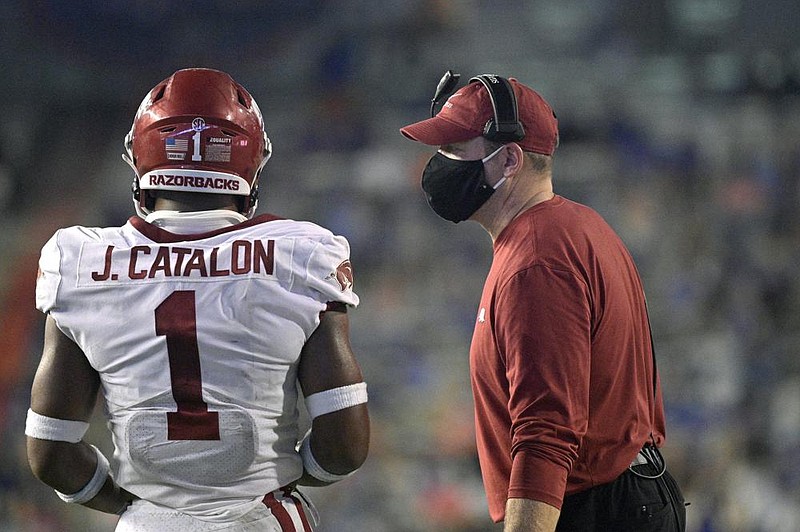 FAYETTEVILLE -- University of Arkansas safety Jalen Catalon capped an outstanding season Monday by being named to the first-team Freshman All-American unit selected by the Football Writers Association of America.

Catalon, a redshirt freshman from Mansfield, Texas, is the first Razorback voted onto the FWAA Freshman All-American team since linebacker Dre Greenlaw in 2015.

The 5-10, 189-pounder racked up 99 tackles, 4 pass breakups, 3 interceptions and 2 forced fumbles despite missing the equivalent of one game in the Razorbacks' all-SEC schedule. Catalon tied for 11th nationally in tackles and was 25th with 9.9 tackles per game. He and Louisiana Tech linebacker Tyler Grubbs led all FBS freshmen in those categories.

Catalon was the only FBS player with 95-plus tackles and three interceptions during the regular season, when he became the first SEC freshman since Tennessee's Eric Berry in 2007 with three picks and at least 86 tackles.

A semifinalist for the Thorpe Award given annually to the nation's top defensive back, Catalon was a first-team All-SEC choice by The Associated Press and a second-team pick by coaches.

He was also named to the Freshman All-American first team by The Athletic and was a third-team All-American selection by Phil Steele.

Catalon was one of five defensive backs on the FWAA Freshman All-American squad, joining SEC brethren Emmanuel Forbes of Mississippi State, Malachi Moore of Alabama and Eli Ricks of LSU, along with Brandon Joseph of Northwestern.