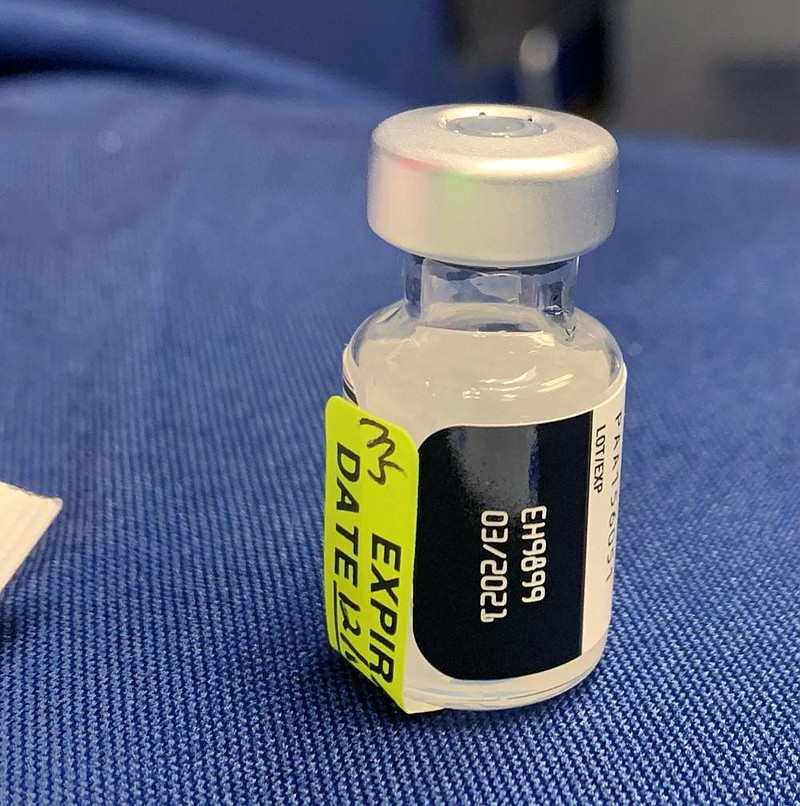 FAYETTEVILLE — Some school employees and residents 70 and older were vaccinated Monday at pharmacies in Northwest Arkansas, but far fewer than expected will be able to get the covid-19 vaccine this week.

The Washington Post reported Friday the national stockpiles have emptied.

John Vinson, director of the Arkansas Pharmacists Association, said pharmacies expected by next week to get double the weekly shipments they have been receiving. Instead, shipments will likely remain flat for some time unless something changes, he said.

The state has been receiving between 30,000 and 50,000 doses each week, and it looks like that will remain the case instead of the doses increasing, Vinson said. The state received 37,000 doses for this week.

Staff and residents of longterm care facilities, health care workers and some first responders have been receiving the vaccine over the past month. Those groups were the state’s priority and comprised Phase 1-A of the vaccine distribution plan.

Two groups in Phase 1-B started receiving the vaccine Monday. Residents in those two groups include K-12, higher education and child care employees and all residents 70 years and older.

The Bentonville and Springdale school districts planned to host on-site vaccination clinics for faculty and staff later this week in cooperation with local pharmacies.

The Bentonville district, which has 2,364 employees, planned to give about 1,700 doses starting Thursday and Friday, according to Leslee Wright, spokeswoman. The district sent an email to staff Monday stating all vaccination appointments were canceled and new priorities would be made with about 450 doses of the vaccine expected this week.

Employees who work directly with students or drive a bus in Bentonville will be considered for vaccines this week. Employees who are less likely to spend 15 consecutive minutes or more with a student, such as those who work in administration or maintenance, must wait, according to the email from Janet Schwanhausser, assistant superintendent.

“Once we have the list narrowed to those that have the most exposure to students, we will sort the list by date of birth and assign slots from the earliest to the latest date of birth. On Wednesday of this week, you will receive either an email to tell you how to sign up for your vaccine appointment or an email to let you know you are on the list to be considered for future clinics,” according to the email.

Likewise, the Springdale School District expected to give out 2,000 doses to faculty and staff this week, but was told its doses would be cut by a one-third, meaning about 1,340 doses will be available, according to Rick Schaeffer, spokesman for the district.

“District employees were signed up for vaccines Wednesday, Thursday and Friday. We will have enough doses for Wednesday and Thursday and will reschedule Friday’s group when additional doses come in,” Schaeffer wrote in a text message. The district has 2,952 employees.

Julie Stewart, pharmacist at Medical Arts Pharmacy in Fayetteville, said Monday afternoon the pharmacy vaccinated about 120 people 70 and older. The pharmacy is booked through February, but will likely have to reschedule some appointments because they don’t expect to receive as many doses as planned, she said. Most pharmacies have been told they will likely get approximately 100-150 doses per week, she said.

Collier Drug, which has pharmacies in Fayetteville, Centerton, Prairie Grove and Farmington began vaccinating people in 1-B on Monday, according to Mel Collier of Collier Drug. Both the Pfizer vaccine and the Moderna vaccine require two doses — about 21 days after the first Pfizer dose and about 28 days after the first Moderna dose.

The Arkansas Department of Health’s website states 133,962 of the 275,000 doses, or about 48%, received by pharmacies have been administered. The data does not include Walgreens or CVS pharmacies, which are giving vaccines through a federal program to employees and residents of long-term care facilities.

Pharmacies should continue to offer the vaccines to people in Phase 1-A, and, as they are able to, those in the first two groups in Phase 1-B, Vinson said.

The demand for the vaccine is high among educators and people over 70, he said.

Other groups of residents in Phase 1-B who aren’t yet be eligible to receive the vaccine include food and agricultural workers, manufacturing workers, public transportation workers, U.S. Postal Service workers and essential government workers. The state has estimated those groups will be able to begin getting the vaccine in February.

Phase 1-C, which the state expects to be able to begin receiving vaccines in April, includes people ages 65-69, people