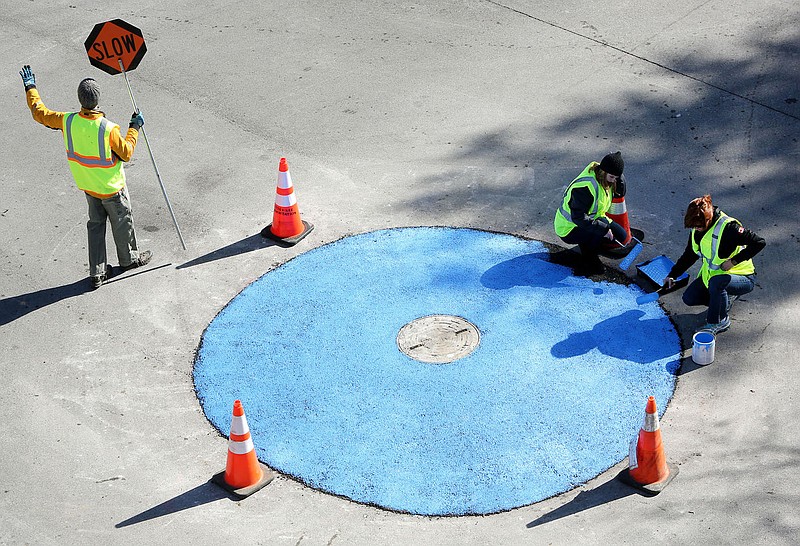 NWA Democrat-Gazette/DAVID GOTTSCHALK Peter Nierengarten (left), Sustainability and Resilience director for Fayetteville, directs traffic Thursday as Tierney Nawa (left), sustainability intern, and Bonnie Adams with Travel with Care paint the interior of a new mini-roundabout at Spring Street and School Avenue in Fayetteville. The mini-roundabout is a pilot project to exemplify the concept of tactical urbanism. The project is similar to the temporary crosswalk in front of the Walton Arts Center&#8217;s Nadine Baum Studios.

Roundabouts, an increasingly common roadway feature in cities, also is spreading to rural areas in a bid to improve safety.

The Arkansas Department of Transportation is building a roundabout at the junction of Arkansas 158 and Arkansas 163 just south of Jonesboro in rural Craighead County.

The $1.6 million project is scheduled to be completed later this year. The agency is offering an online briefing on how to navigate the roundabout through Jan. 26.

The roundabout was recommended after a safety study identified the intersection and two other rural junctions as candidates to be retrofitted with the circular intersection. The Craighead County intersection now features a two-way stop sign for traffic on Arkansas 158 and County Road 428 crossing Arkansas 163.

"Rural roundabouts are rare and generally thought to be an improvement made to increase efficiency," Dave Parker, a department spokesman, said in an email. "However, this location as well as 2 others in Arkansas were identified because of crash history as being considered for a roundabout to help with safety."

The design of a roundabout features channeled approaches and a center island that results in lower speeds and fewer crashes, according to the Federal Highway Administration.

Before and after crash data shows a 90% reduction in fatalities, a 76% decline in serious injuries and a 35% reduction in all crashes, the agency's National Center for Rural Road Safety found.

"The thought is that a roundabout certainly slows or calms traffic and virtually eliminates crashes where a vehicle is broad-sided at high speeds," Parker said. "The natural flow of a roundabout allows glancing crashes at most which would lessen the impacts and reduce the likelihood of injuries and fatalities."

The initiative comes as Arkansas highways continue to lag behind the rest of the nation in fatal crash rates.

An annual review of the nation's highways by the Reason Foundation ranks the Arkansas highway system ninth in the country in overall cost-effectiveness and condition. The Top 10 placement was a 23-spot improvement from its previous ranking, according to the foundation.

"The state improved in most categories, most notably in the urban Interstate, urban arterial, and rural arterial pavement condition," according to the foundation, a libertarian think tank founded in 1978.

On spending, Arkansas ranks ninth in total spending per mile and 25th in capital and bridge costs per mile, according to the report.

"To improve in the rankings, Arkansas needs to reduce its fatality rate and improve its pavement conditions," said Baruch Feigenbaum, lead author of the annual report and managing director of transportation policy at the foundation. "Arkansas is in the bottom 15 states for all three fatality categories and in the bottom half in three of the four pavement categories.

"Compared to neighboring states, the report finds Arkansas' overall highway performance is better than Oklahoma (ranks 33rd), but worse than Mississippi (ranks 8th) and Tennessee (ranks 7th). Arkansas is doing better than comparable states like Louisiana (ranks 31st), but worse than others like Missouri (ranks 2nd)."

Intersection crashes continue to be a vexing problem, according to the Federal Highway Administration.

About third of the annual traffic fatalities in the United States, or more than 10,000, occur at intersections, agency data shows. Of those, 7,000 happened at an intersection without a traffic signal and nearly 4,000 happened in rural areas.

And 8% of the fatalities that happen at intersection occur on roadways with a posted speed limit exceeding 35 mph.

Urban roundabouts are sold on efficiency as well as safety. Safety is the prime factor in using roundabouts in a rural setting.

The geometry of roundabouts eliminate head-on crashes and make so-called 'T-bone' crashes much less likely, according to the National Center for Rural Road Safety.

"The natural flow of a roundabout allows glancing crashes at most which would lessen the impacts and reduce the likelihood of injuries and fatalities," Parker said.

The roundabout, when completed, will be the second one on a state highway in Craighead County. The first was completed at Arkansas 351 and Airport Road in Jonesboro in 2017, according to Parker.

Meanwhile, for people unfamiliar with roundabouts, the department is hosting an online briefing about roundabouts at the following link: https://bit.ly/2KkthXx.

The public is invited to listen to the online presentation and view materials that would've been handed out at an in-person meeting. The public also can submit written comments or questions at the link through Jan. 26.