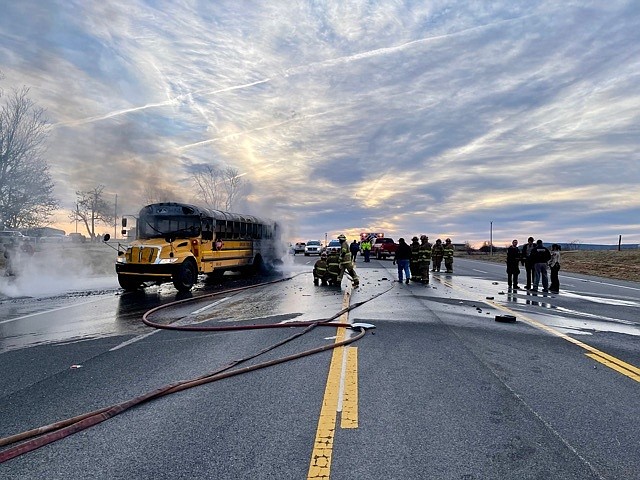 The wreck happened just before 8 a.m. on U.S. 62, east of Green Forest, Ross said. The bus was from the Green Forest School District, Superintendent Matt Summers said in a Facebook post.

The bus was stopped while loading and the other driver slammed into the rear end of the bus, Ross said, adding that both vehicles burned as a result. Green Forest Police Chief John Bailey said a Hyundai Elantra collided with the back of the bus.

The driver of the Elantra, whose name has not been released at this time, died on scene, according to Ross.

"Apparently the car just didn't see them,” said Bailey. "Witnesses say the bus was stopped with its lights on. A witness said they didn’t see any brake lights on the car or anything and it ran just right up underneath it. … There may have been two feet [of the car] sticking out from behind the bus.”

"The car burst into flames underneath the bus,” said Bailey.

More than a dozen students were reportedly on the bus at the time of the crash. The students and the driver were not injured, Ross said. The superintendent said the students and driver had been evaluated by medical professionals.

“We were very fortunate to get all those children off,” Ross said, “The bus driver did a tremendous job. It’s a miracle to God we have all our kids alive after seeing the aftermath [of the crash].”