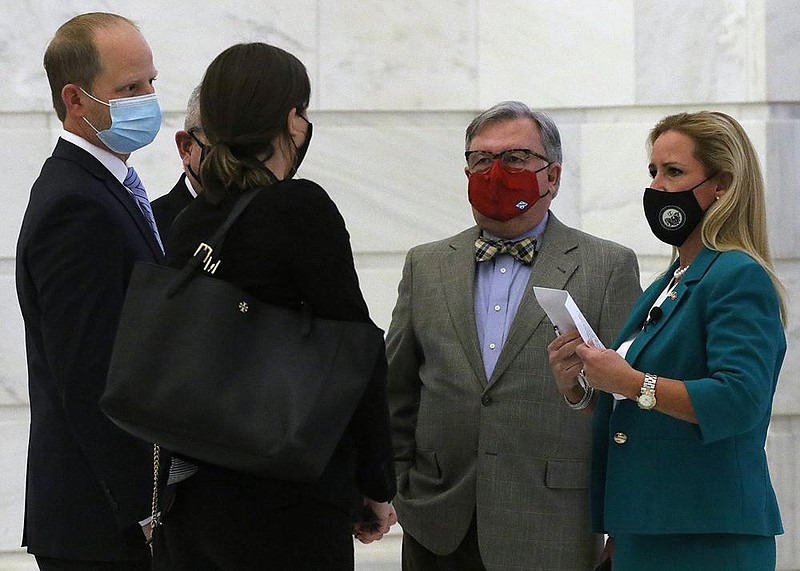 The Republican attorney general said Webb will serve as the redistricting director. Both Davis and House will be under contract.

Webb's salary is $150,000 a year and Davis and House are on monthly contracts of $6,666 each, Rutledge spokeswoman Stephanie Sharp said afterward.

Along with the governor and secretary of state, the attorney general serves on the state Board of Apportionment that redraws the boundaries of legislative districts once every 10 years based on information from the U.S. census.

Richard Bearden of the Impact Management Group has been hired as a consultant for $5,000 a month for the secretary of state's office "in our redistricting efforts," said Kevin Niehaus, a spokesman for Republican Secretary of State John Thurston.

Among other things, Bearden is a lobbyist and former executive director of the state Republican Party serving under then-Chairman and now Gov. Asa Hutchinson, according to Impact Management Group's website.

Asked if Hutchinson has decided to hire more staff or contract with any particular companies for redistricting, Hutchinson said in a written statement, "I have asked Bill Gossage, my Deputy Chief of Staff for External Operations, to lead the redistricting team in the Governor's office.

"Two additional members of my staff, Andres Rhodes and Nicholas Ortiz, have received training and will be assisting in the redistricting process," the Republican governor said in a written statement. "No additional staff is anticipated at this time."

"Rett is one of a handful of people who was involved in the 2010 redistricting effort," she said in a written statement. "He will not be paid with taxpayer funds."

Hatcher is being paid from inaugural funds through the state Republican Party, Beck said. Among other things, Hatcher is a lobbyist and a former aide to the governor.

At a news conference at the state Capitol to announce her office's hiring of Webb, Davis and House, Rutledge said, "We want to make sure in Arkansas that these legislative districts are fair and that are as equal as possible.

"This redistricting process is going to be citizen-focused and not legislator-focused, and I think that's important because we want to make sure that all citizens in the state of Arkansas are fairly represented," she said.

Webb, Davis and House have experience as former legislators, and Webb and House are attorneys and Davis is an engineer, Rutledge noted. She said Webb also is a former state senator, a former chief of staff to the late Lt. Gov. Win Rockefeller and a former counsel to the Republican National Committee.

"They absolutely are not going to draw partisan lines," Rutledge said in response to a reporter's question.

"We'll look to keep communities of interest together, we'll look to making districts contiguous and compact districts and we will work to have a continuity of representation, once again focusing on the citizens that they know who their elected representatives and senators are and the communities that they'll be working in," Webb said.

"It may be a little while before we get started because we are still waiting on the census numbers to come in, but once they are in we will be eager to move forward," said Webb, whose wife, Barbara Webb, serves on the Arkansas Supreme Court.

Afterward, Bonnie Miller, chairwoman of the Arkansas Voters First group, said, "Doyle Webb's appointment as Director of Redistricting for the Board of Apportionment is a very clear sign that the State of Arkansas is intent on making this the most political redistricting cycle in state history.

"We expected the redistricting process to protect one political party at the expense of fair representation, but this is a joke," she said in a written statement. "As former chair of the Arkansas Republican Party for 12 years, Mr. Webb's primary responsibility will be to make sure the good old boy system is alive and well in Arkansas. We can think of no more clear example of why Arkansas continues to need an independent -- non-partisan -- redistricting commission."

In August, the Arkansas Supreme Court affirmed Thurston's decision to reject the petitions submitted by the Arkansas Voters' First committee to place its proposed constitutional amendment to create an independent redistricting commission on the Nov. 3 general election ballot.