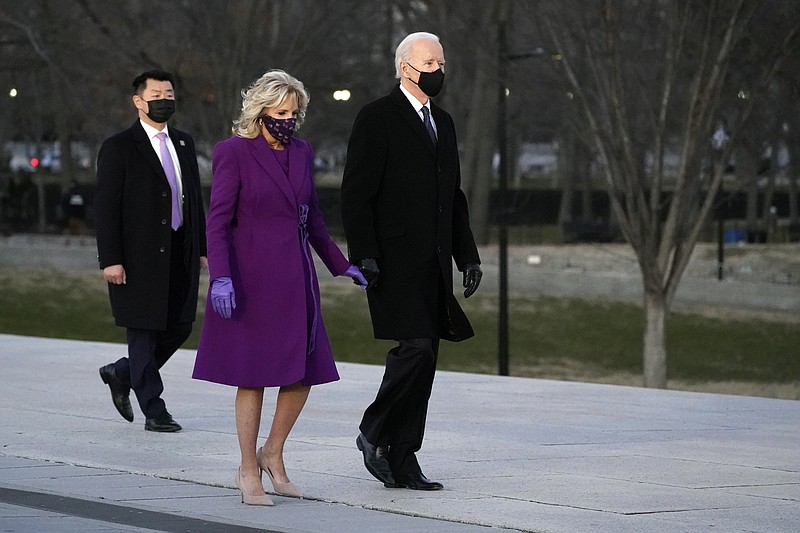 WASHINGTON -- As Joe Biden prepared to take over the White House, the U.S. crossed the grim marker of 400,000 covid-19 deaths Tuesday.

Biden inherits a country weary from 10 months of lockdowns and business closures, divided by attacks on public-health professionals and tantalized by the promise of widespread vaccination that will take months to have much effect.

Yet at noon today, the virus, and the nation's response to it, will be Biden's responsibility.

"We're inheriting a huge mess here," incoming White House Chief of Staff Ron Klain bluntly told CNN on Sunday. "The virus is going to get worse before it gets better," he warned. "The virus is the virus. What we can do is act to control it."

[Video not showing up above? Click here to watch » https://www.youtube.com/watch?v=KVkRNCBrQZ8]

The effort to control the outbreak likely will be the defining test for the new administration: Biden has pledged to bring competence to a crisis that has made the U.S. exceptional for the wrong reasons -- the most confirmed infections and deaths in the world.

The 400,000 death toll, reported Tuesday by Johns Hopkins University, is greater than the population of New Orleans, Cleveland or Tampa, Fla. It's nearly equal to the number of American lives lost annually to strokes, Alzheimer's disease, diabetes, flu and pneumonia combined.

With more than 4,000 deaths recorded on some recent days -- the most since the pandemic began -- the toll by week's end probably will surpass the number of Americans killed in World War II.

"We need to follow the science and the 400,000th death is shameful," said Cliff Daniels, chief strategy officer for Methodist Hospital of Southern California, near Los Angeles. With its morgue full, the hospital has parked a refrigerated truck outside to hold the bodies of covid-19 victims until funeral homes can take them.

"It's so incredibly, unimaginably sad that so many people have died that could have been avoided," he said.

The president-elect has lined up an expansive team of scientific and supply-chain experts to boost testing and vaccinations and aims to shake up how the federal government manages the pandemic. Incoming press secretary Jen Psaki announced last week that Biden would be "phasing out" the Trump administration's structure and centralizing all covid-19 response at the White House under Biden counselor and coordinator Jeff Zients.

Biden's team has only grown more concerned about the scale of the challenges ahead as the team has prepared to take over. But the biggest challenge, in members' view, is declining confidence in government and institutions.

The new administration hopes to rebuild trust in government by setting clear goals -- be it for vaccinations or reopening schools -- and asking the public to be invested in achieving them.

A priority, Biden aides said, was demonstrating that the presidential "bully pulpit" can be used for more than bullying, but also to bring about national unity during a historic crisis.

To that end, Biden's first stop in Washington after arriving for his inauguration was to pay tribute to the 400,000 lives lost in what his team called a "national memorial" at the Lincoln Memorial reflecting pool.

"To heal we must remember. And it's hard sometimes to remember," Biden said. "But that's how we heal. It's important to do that as a nation."

Vice President-elect Kamala Harris added: "For many months we have grieved by ourselves. Tonight, we grieve and begin healing together."

Biden, aides say, is set to adopt a more top-down approach toward managing the crisis, expanding testing and administering vaccines. Where President Donald Trump emphasized a decentralized approach that left it up to individual states and cities to sort out logistics, the new administration plans to directly engage with them to boost vaccinations and testing.

Similarly, Biden will use his inaugural address to try to bridge a patchwork of state and municipal guidelines and encourage all Americans to wear face coverings. Within hours of taking office, Biden will issue a mask mandate for those on federal property and during interstate travel.

Biden also has set a goal of boosting the pace of covid-19 vaccinations to administer 100 million shots in his first 100 days in office.

Biden's goal of administering 100 million shots is realistic -- the independent Institute for Health Metrics and Evaluation in Seattle recently estimated 141 million people will be vaccinated by May 1.

"A hundred million doses in 100 days I think it is doable," said Michelle Cantu, who heads efforts on infectious disease and immunization at the National Association of County & City Health Officials. "Navigating what that means is going to take a lot of coordination."

Biden has called for Congress to provide money for hiring 100,000 public-health workers to bolster the front-line agencies that Cantu's group represents.

The Trump administration shepherded the development of two highly successful vaccines, with more on the way, and has delivered more than 30 million doses to states, U.S. territories and some major cities. Less than 40% of doses delivered have been administered, and Biden has deemed that a failure.

The pace of vaccinations has been picking up recently to around 900,000 daily shots, but the American Hospital Association estimated that it would take more like 1.8 million a day to reach the goal of widespread or "herd" immunity by the summer.

Biden has talked of setting up mass vaccination sites and deploying mobile units to hard-to-reach places. But that remains aspirational.

"What you need to do is set up something that currently does not exist: a public health infrastructure that is geared to mass vaccinations," said Dr. Paul Offit, director of a vaccine education center at Children's Hospital of Philadelphia. "This has to be people lining up in large facilities. You have to have thousands and thousands of people through."

Meanwhile, thousands of people showed up at sites from the coast to the Tennessee Valley as Alabama began vaccinating senior citizens for covid-19.

People spent the night in cars waiting for shots in Baldwin County, where health workers began immunizing people early Tuesday. County health workers in Huntsville vaccinated 500 people Monday although only 300 people had appointments. Other sites opened in cities ranging in size from Birmingham to Rainsville.

The state is offering vaccines to people 75 and older after limiting the initial doses to health workers. Alabama is among the Southern states trailing the nation in the rate of vaccinations.

Alabama Department of Public Health statistics show about 150,000 people have received shots statewide, but the number does not include those who were immunized most recently. More than 700,000 people are currently eligible for vaccinations in Alabama, including 325,000 health care workers and 350,000 people who are 75 or older. The state has so far received 446,000 doses, according to state numbers.

The University of Alabama at Birmingham Hospital has been notifying patients, who are 75 and older, to have them go to get vaccinated.

The Alabama health department last week disputed rankings that put Alabama last in vaccination delivery, and said that was because some entities had not reported given vaccinations.

Four state senators wrote a letter Tuesday asking for updated numbers on vaccinations given and saying incomplete reporting could threaten the flow of vaccine to the state.

"While the supply pipeline is definitely an issue, our pipeline in Alabama has a kink," Sens. Jim McClendon, Greg Albritton, Tom Whatley and Randy Price wrote. "The rule is simple: The CDC will not authorize shipments to Alabama until they know we are using what we have on hand. Our citizens are paying a deadly price."

The Alabama health department did not immediately respond to a request for comment.

Separately, New York City will have to close vaccination sites after Thursday if it doesn't get a major resupply, Mayor Bill de Blasio said.

The city wants to vaccinate 300,000 people this week but has only about 92,000 doses, de Blasio said in a Tuesday briefing. More than 450,000 doses have been in administered in New York.

The mayor said official tallies that show more ample supplies are flawed, and that in fact a crisis impends.

"At this rate, we will run out on Thursday and hit zero on Friday," de Blasio said. "We will not be able to give shots at a lot of our sites. We won't get shots until next week."

De Blasio joins a chorus of local and state officials calling on the federal government to disburse more doses. New York Gov. Andrew Cuomo said Monday that he asked Pfizer Inc. whether the state could buy vaccines directly from the company because the U.S. government has failed to increase supply.

The U.S. Centers for Disease Control and Prevention recommended expanding eligibility to more than 7 million New Yorkers from 5 million "practically overnight," Cuomo said Monday in a letter to Pfizer chief executive Albert Bourla. At the same time, the CDC hasn't increased -- and in some cases reduced -- the supply to states. New York will get 250,000 doses this week, 50,000 fewer than last week. At that rate, inoculating those eligible would take seven months, Cuomo said.

Information for this article was contributed by Zeke Miller, Ricardo Alonso-Zaldivar, Deb Riechmann, Adam Geller, Janie Har and staff members of The Associated Press; and by Henry Goldman of Bloomberg News. 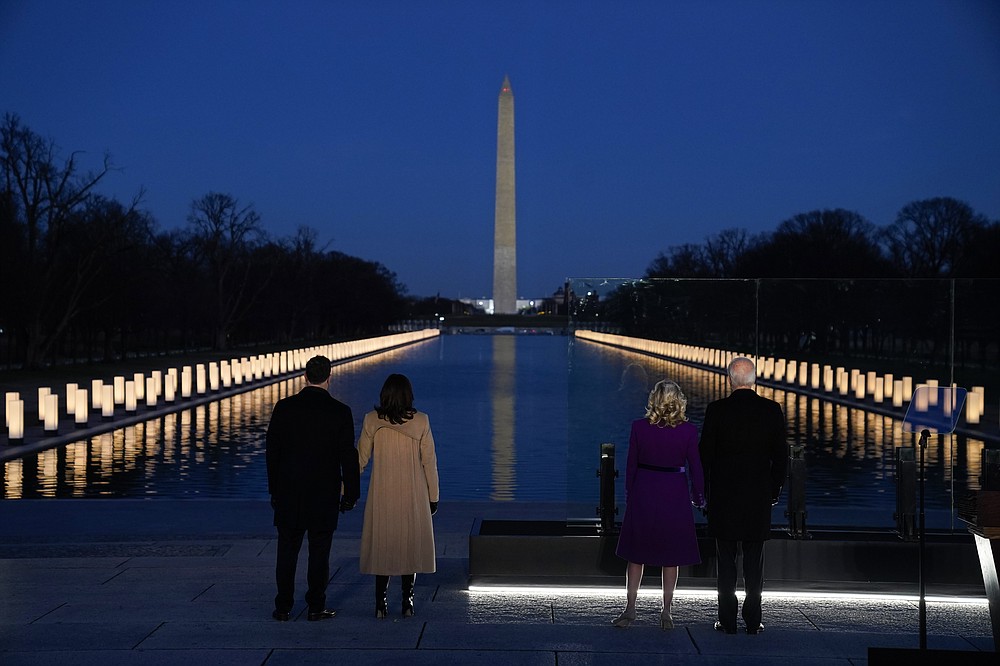 With the Washington Monument in the background, President-elect Joe Biden with his wife Jill Biden and Vice President-elect Kamala Harris with her husband Doug Emhoff listen as Yolanda Adams sings "Hallelujah" during a COVID-19 memorial, with lights placed around the Lincoln Memorial Reflecting Pool, Tuesday, Jan. 19, 2021, in Washington. (AP Photo/Evan Vucci)
ADVERTISEMENT