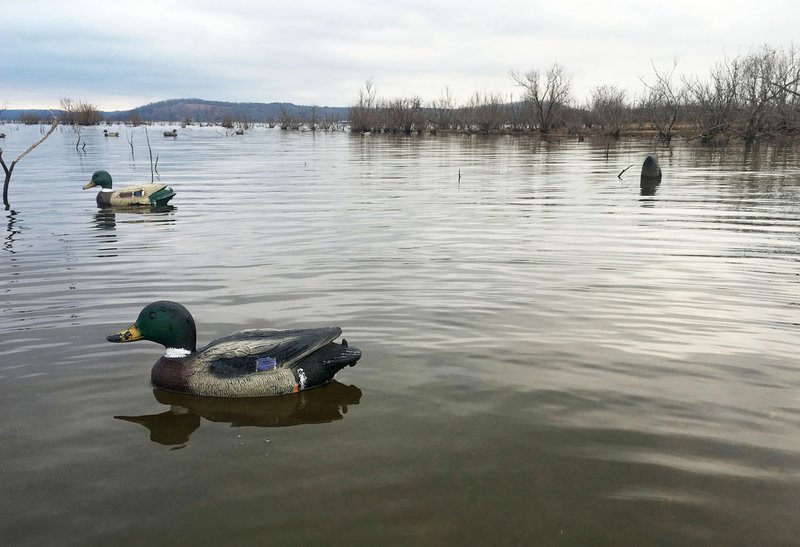 Waterfowl biologists and hunters in neighboring states are reporting a similar duck season to the one we're experiencing in Arkansas. Missouri biologists noted seeing ducks migrating in October and early November. There was no real migration during the season.

This has happened at least for the past three years, according to biologists for the Missouri Department of Conservation. Based on the Arkansas Game and Fish Commission's midwinter waterfowl survey conducted in early January, the state's total duck numbers and mallard numbers are behind the average from the past 11 years. The Delta mallard population estimate is the second lowest since formal surveys began in the 2009-10 wintering period and represent only 45% of the 2010-21 long-term midwinter survey average of about 826,000 mallards.

Observers flying the AGFC's midwinter waterfowl survey Jan. 4-7 estimated the greatest number of mallards in the Delta in the Bayou Meto, Little River, Lower White and Black River-Upper White survey zones. Estimates for mallards and total ducks in the Arkansas River Valley were less than half their 2014-21 averages, with the vast majority of ducks observed in the West Dardanelle survey zone.

"Ducks remained concentrated on established waterfowl sanctuaries and habitats that appeared not to be actively hunted," said Luke Naylor, the Arkansas Game and Fish Commission's waterfowl biologist. "Rainfall preceding this survey provided a bit of a boost in habitat availability. It is unclear how much of that habitat remains on the landscape now. Ducks were uncommon in these fields during these daytime surveys. Birds are likely leaving sanctuary areas at night to take advantage of these new habitats."

AGFC observers estimated 1.08 million total ducks in the Delta, fewer than half of which were mallards (458,314). Duck population estimates in the Arkansas River Valley slightly exceed 21,000, including about 9,000 mallards. Fewer than 5,000 mallards, and about 9,000 total ducks, were counted in southwest Arkansas.

Observers in the Delta estimated around 886,000 light (lesser snow and Ross's) geese and about 221,000 greater white-fronted geese during this survey.

The bulk of ducks in many Arkansas areas, based on biologists' counts and hunter anecdotal evidence, have been gadwalls, with some pintails, green-winged teal and shovelers. Missouri waterfowl biologists said the same thing about southeast Missouri.

Many Arkansas duck hunters claim states to the north are "short-stopping" the duck migration with more available food. This year, the idea was, the derecho winds in Iowa during the summer shook so much corn to the ground there that ducks didn't have any need to move further south. Iowa biologists scoffed at that notion. Corn in August would be rotten in the field by now, they said, and ducks aren't the only animals that eat it. The derecho winds, according to Iowa sources, didn't damage the crops dramatically. After Christmas Eve, Iowa was blanketed with ice and snow. Some areas had drifts and most had 4-10 inches of snow. And yet, there was no significant duck migration.

"It is my understanding that the farmers were actually able to harvest most of that corn, so it turned out not to be as big of a deal as expected," Naylor said. "The midwinter counts in Iowa showed few noticeable duck concentrations."

Arkansas' regular waterfowl season continues uninterrupted to its close at sunset Jan. 31. Youth, veterans and active military on Feb. 6 may hunt any WMA or private land (including WRICE permitted hunts) all day.

South Oliver GTR Mast production has been good. The area is 50% flooded with a current gauge reading of 1.6 foot. Water is rising in the GTR.

Thompson Tract GTR Mast production has been good. The area is 100% flooded with a current gauge reading of 1.3 feet.

Hunt Area Mast production is good. Water levels in the huntable areas are dependent on the St. Francis River. The water level at Oak Donnick is 212.69. The level for huntable timber is 212.

Unit B Excellent stand of millet and native vegetation. 100% flooded.

Habitat and water levels are normal on both Pierce and Dix creeks.

BERYL ANTHONY LOWER OUACHITA WMA The WMA has good hard mast production. The only water on the WMA currently is in the sloughs and in the oxbow lakes. Clear Lake Road is closed to all vehicular access, including ATVs.

FREDDIE BLACK CHOCTAW ISLAND WMA DEER RESEARCH AREA Habitat conditions are good. There is variable flooding associated with the Mississippi River. Use extreme caution when boating on the river.

Galla Creek GTR Moderate stand of native vegetation and millet, including a mixture of barnyard grass and sprangle top. 100% flooded.

Slaty Crossing Moist-Soil Unit Due to ongoing waterfowl habitat enhancement projects, this unit did not grow a desirable native vegetation crop this year. Only about half of the unit produced a crop of millet, but the areas that did produce look amazing. 100% flooded.

Pullen Pond Due to ongoing waterfowl habitat enhancement projects, parts of the northeastern sections of this area are bare ground. Other parts of this area have spotted sections of great desirable native vegetation. The desirable native vegetation has started to become more and more prevalent with each year of ongoing management work. Water level 100%.