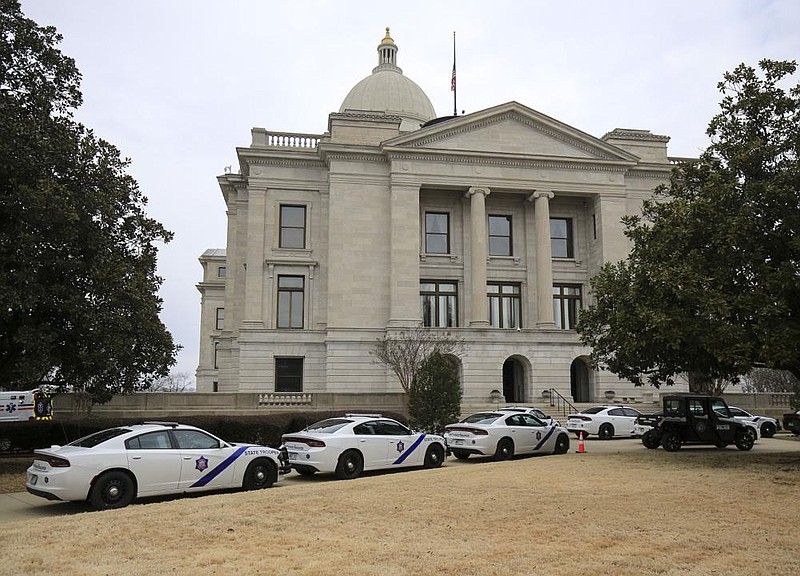 Arkansas State Police vehicles line the sidewalk on the south end of the state Capitol Monday Jan. 11, 2021 in Little Rock on the first day of the legislative session. (Arkansas Democrat-Gazette/Staton Breidenthal)

Benton legislator says he has virus

Fite said he learned Wednesday morning that he tested positive for the coronavirus Tuesday after testing negative Friday. He said he sits next to Rep. Milton Nicks, D-Marion, in the House chamber, and he suspects he was exposed to the virus by Nicks.

Nicks informed Shepherd on Jan. 13 that he tested positive for the coronavirus.

"I am not having any symptoms right now," he said. "I feel fine."

Nicks could not be reached for comment by telephone Wednesday.

"You can't start out, like Sen. [Larry] Teague said, by giving everything up and then come to the end of the session, and you've got some really good bills that you need the money to cover them and you've already spent it on a smaller items."

He added that the state's tax revenue collections can change overnight amid the covid-19 pandemic.

Sen. Jonathan Dismang, R-Searcy, on Wednesday questioned why the state Department of Finance and Administration has taken a neutral stance on Senate Bill 9 by Sen. Gary Stubblefield, R-Branch, that would repeal a water usage fee paid by owners and operators of automatic car washes, car wash tunnels and self-service wash bays, effective Oct. 1.

Paul Gehring, an assistant revenue commissioner for the Finance Department, told the Senate Revenue and Taxation Committee that "in consultation with the governor's office, we are neutral on the bill" and not speaking for or against the bill.

Dismang, who is the Senate tax committee's vice chairman, questioned why the department is neutral on a bill that, he said, is projected to reduce state general revenue that isn't factored into Gov. Asa Hutchinson's proposed general revenue budget for fiscal 2022.

"Typically, I think in the past [the Finance Department] has always taken the position of being opposed to a bill that impacts general revenue because it impacts the governor's balanced budget proposal that he made back in November," he said.

Gerhing said the department recognized that it had administrative costs associated with the "unique" fee.

"We also recognize that there is administrative costs for businesses to comply with this requirement," he said. "For this specific circumstance with this bill, we did not see a strong motivation [for the Finance Department] to oppose, given that we have our resource costs with this specific fee."

Dismang, who is a co-chairman of the Joint Budget Committee, asked Gehring "to give me a list of the positions that would be eliminated if we eliminated this tax and the savings that would then be generated ... and how you came to your decision."

The committee took no action on the bill.

The Senate Public Health, Welfare and Labor Committee on Wednesday endorsed a bill that would regulate so-called step therapy protocols.

The bill is Senate Bill 99 by committee Chairwoman Cecile Bledsoe, R-Rogers. According to the bill, health benefit plans are increasingly making use of step therapy protocols under which patients are required to try one or more prescription drugs before coverage is provided for a drug selected by the patient's health care provider.

In these cases, Bledsoe said a patient's health insurance company doesn't want to pay for a medicine prescribed by the patient's doctor, unless the patient tries another less-expensive medication that the company feels will work.

"Many times, his health condition is not improving and in fact time is being wasted in getting this person well," she said.

A patient can appeal this process, but it takes weeks and months to navigate the appeal process, she said.

"We are saying let's reform it," Bledsoe said. "We want the right medication at the right time for the right patient."

At least 25 states, including Louisiana and Oklahoma and Texas, have updated their laws to regulate step therapy protocols required by insurers and pharmacy benefit managers, she said. She said she plans to propose five amendments to the bill after it reaches the full Senate.

But Max Greenwood, representing Arkansas Blue Cross and Blue Shield, said "I would respectfully disagree that this is reforming step therapy."

"I think what this bill does is it basically shifts the costs," she said. "In my opinion, the bill basically benefits pharmaceutical manufacturers at the cost of hardworking Arkansans. This is going to impact cost across the board."

In addition, there already is an appeals process for patients, but it doesn't take months to navigate that process, Greenwood said.