Pandemic measures, backing WHO, rejoining climate pact at top of his list by Compiled by Democrat-Gazette Staff From Wire Reports | January 21, 2021 at 7:08 a.m. 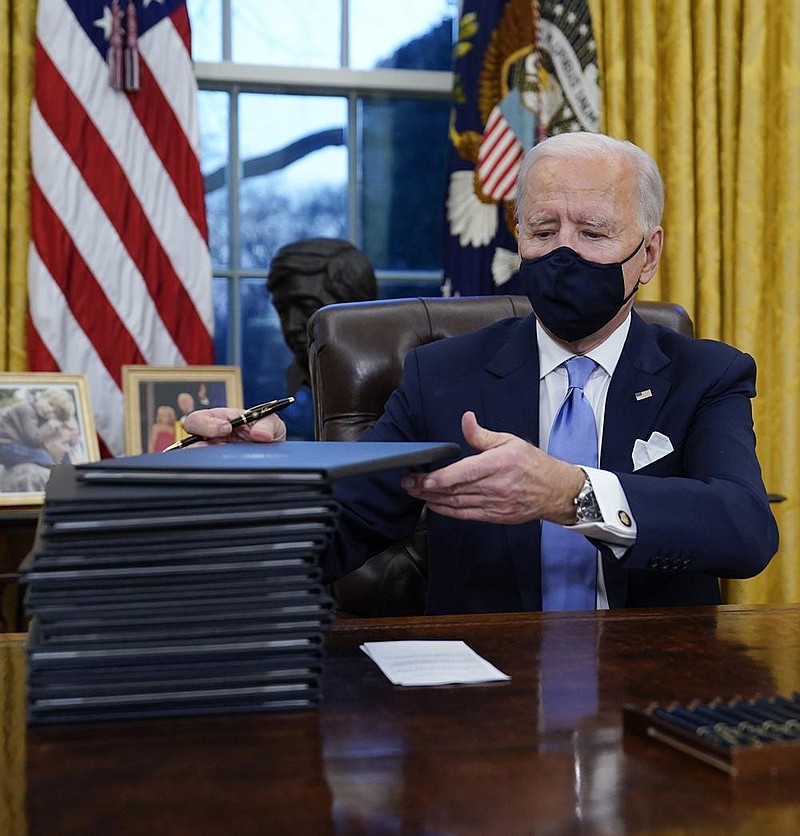 President Joe Biden signs his first executive orders Wednesday in the Oval Office of the White House. “I think some of the things we’re going to be doing are going to be bold and vital,” he said in brief remarks during the appearance. “And there’s no time to start like today.” (AP/Evan Vucci)

WASHINGTON -- President Joe Biden signed a blizzard of executive orders Wednesday on the coronavirus, immigration and climate change -- opening a 10-day cascade of directives reversing the policies of his GOP predecessor as Democrats pushed for even more sweeping and prompt legislative action.

The most pressing of his priorities are measures to combat the ongoing deadly coronavirus pandemic. Biden signed executive actions to require masks on all federal grounds, and asked agencies to extend moratoriums on evictions and on federal student loan payments.

Consistently masking up is a practice that science has shown to be effective in preventing the spread of the coronavirus, particularly when social distancing is difficult to maintain.

Biden is challenging all Americans to wear masks for the first 100 days of his administration. That's a critical period, since communities still will be vulnerable to the virus even as the pace of vaccination increases in pursuit of Biden's goal of 100 million shots in 100 days.

Biden said Wednesday that he wants to move quickly to address the country's big, urgent problems with a spirit of unity and national purpose. The pandemic has killed 400,000 Americans, the economy has shed millions of jobs and just two weeks ago thousands of rioters stormed the Capitol in an attempt to overturn the results of the Nov. 3 election, which Biden won by 7 million votes.

In his first appearance from the Oval Office, Biden said his administrative actions were "all starting points" as he signed a sampling of the executive orders.

"I think some of the things we're going to be doing are going to be bold and vital," he said in brief remarks. "And there's no time to start like today."

The freshly inaugurated president's rush to roll back some of Trump's most controversial policies reflected the years of pent-up frustration among Democrats that they had been largely powerless to stop an administration that espoused policies they vehemently opposed.

Acting expeditiously, Democrats said, was particularly vital as the nation continues to battle a once-in-a-century pandemic that continues to kill thousands of Americans a day and batters the fragile economy.

"We'll press forward with speed and urgency, for we have much to do in this winter of peril and possibility," Biden said in his inaugural address. "Few periods in our nation's history have been more challenging or difficult than the one we're in now."

But the new White House, as well as its Democratic allies on Capitol Hill, are keenly aware that expansive policy changes they want to implement in the first months of Biden's presidency will require the assent of Congress, and almost certainly the support of some Republicans, particularly in the Senate.

[Video not showing up above? Click here to watch » https://www.youtube.com/watch?v=4CRjqLIImg8]

Some of his actions drew swift criticism from GOP lawmakers who had largely endorsed the policies of Trump.

"President Trump created the best economy in the world by limiting bureaucratic regulations and President Biden should seek to build on this success instead of diminishing it," said Rep. James Comer, R-Ky., the ranking Republican on the House Oversight and Government Reform Committee. "Government does not know best, the American people do."

Sen. John Barrasso of Wyoming, the No. 3 Senate Republican, stressed that Biden's inaugural address was one of "unity and it's important to govern that way as well."

Most of the 17 directives that Biden signed Wednesday had been signaled previously by Biden or staff members. Taken together with the two legislative plans he has sent to Congress -- coronavirus relief and an immigration overhaul -- the orders highlight Biden's immediate priorities, while sending a message that his administration plans to reengage on the global stage.

GOP lawmakers were particularly critical of the Biden administration's decision to roll back key energy and climate regulations of his predecessor, arguing that doing so would ultimately cost jobs.

Biden's "policies from Day One hurt American workers and our economy," said Sen. Shelley Moore Capito, R-W.Va. Pointing to the Biden administration's climate actions, she continued: "This virtue signaling comes at the expense of low-income and rural families that rely upon industries opposed by liberal environmental groups."

Biden's coronavirus legislation is already facing stiff challenges in Congress, as Democrats hold only narrow majorities in both chambers and Republican support is still needed to pass most bills in the Senate. The White House nonetheless hopes to court a smaller circle of influential GOP lawmakers, particularly senators, and had reached out to key Republicans such as Sen. Lisa Murkowski of Alaska to get their input on their virus aid plan.

"It's going to require, I think, a fair amount of debate and consideration," Murkowski said Wednesday. "But he's made it clear that this is his initial priority. I don't disagree with that."

Biden White House officials have emphasized the need for Congress to approve his larger relief package, which would extend unemployment benefits; dole out an additional $1,400 in stimulus payments for millions of Americans; and devote tens of billions of dollars to economic needs such as rental, housing and food assistance, among other measures.

But acting Wednesday on his own, Biden asked the Education Department to consider extending a freeze on payments for federal student loans until Sept. 30.

Borrowers, who owe a collective $1.5 trillion, would not be required to make payments on their federal student loans, their loans would not accrue any interest, and all debt collection activity would halt through September.

Biden is also requesting that the Centers for Disease Control and Prevention extend a moratorium on evictions that expires after this month to at least through March.

He also asked three key agencies -- the departments of Veterans Affairs, Agriculture, and Housing and Urban Development -- to extend foreclosure moratoriums for federally backed mortgages under their purview through at least the end of March.

"These are emergency measures that will help to make sure that no American is put in the place of having to make the decision to pay their student loan payment or put food on the table in the short term and will help to provide some near-term relief," said Brian Deese, the new director of the White House National Economic Council.

On immigration, Biden signed an order repealing the ban on travel from several majority-Muslim nations.

Trump in January 2017 banned foreigners from seven mostly Muslim countries from entry into the country. After a lengthy court fight, a watered-down version of the rule was upheld by the Supreme Court in a 5-4 decision in 2018.

The new administration says it will improve the screening of visitors by strengthening information sharing with foreign governments and other measures.

Biden also reversed a Trump plan to exclude people in the country illegally from being counted in the 2020 census. The once-a-decade census is used to determine how many congressional seats and Electoral College votes each state gets, as well as the distribution of $1.5 trillion in federal spending each year.

Biden's team says the new administration will ensure that the Census Bureau has time to complete an accurate count for each state and that the apportionment is "fair and accurate."

Another action called on the Department of Homeland Security to continue an Obama-era initiative to prevent those protected under the Deferred Action for Childhood Arrivals program from deportation and issuing them work permits as long as they qualified under the requirements laid out when the program began in 2012.

Trump ordered an end to the program in 2017, triggering a legal challenge that ended in June when the Supreme Court ruled that it should be kept in place because the Trump administration failed to follow federal rule-making guidelines in undoing it. But the program is still facing legal challenges.

Biden also will end the national emergency over the border that Trump declared as a way to circumvent Congress when lawmakers would not grant him funding for his wall. He also is halting construction to review contracts and how wall money might be redirected.

On climate change, Biden signed an order revoking the permit, issued by the Trump administration, that allowed for the construction of the Keystone XL pipeline and to rejoin the Paris climate accord. The United States will officially be part of the 189-country climate agreement in 30 days.

On racial equity issues, Biden rescinded the "1776 Commission" established by the Trump administration, which the outgoing president framed last year as a "pro-American curriculum that celebrates the truth" about U.S. history but that the incoming administration says tries to erase the racial scars of America's past.

Biden plans to continue rolling out executive orders in coming days. According to guidance shared with Capitol Hill, he plans to issue administrative actions relating to the coronavirus today and economic relief on Friday. A "Buy American" action will come Monday, and an order addressing racial equity issues will follow Tuesday.

Upcoming executive actions will revoke the ban on transgender people from serving in the military, as well as reversing the so-called global gag rule that blocks U.S. aid to organizations abroad that perform abortions or offer counseling on the procedure, Psaki said.

Information for this article was contributed by Min Kim and Jeff Stein of The Washington Post; and by Ricardo Alonso-Zaldivar, Ellen Knickmeyer, Ben Fox, Elliot Spagat, Matt Lee and Josh Boak of The Associated Press. 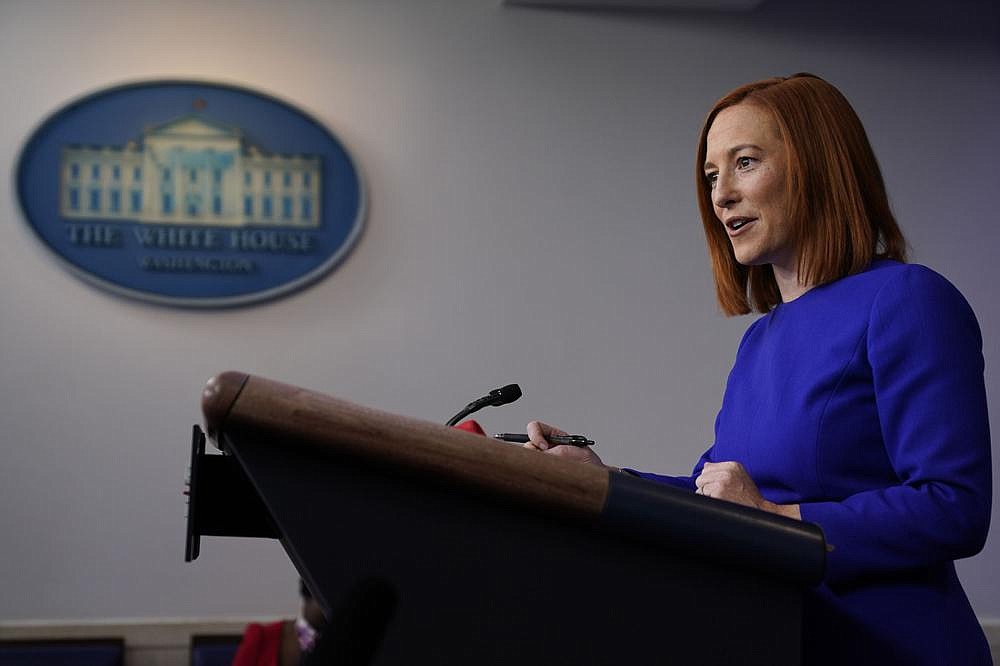