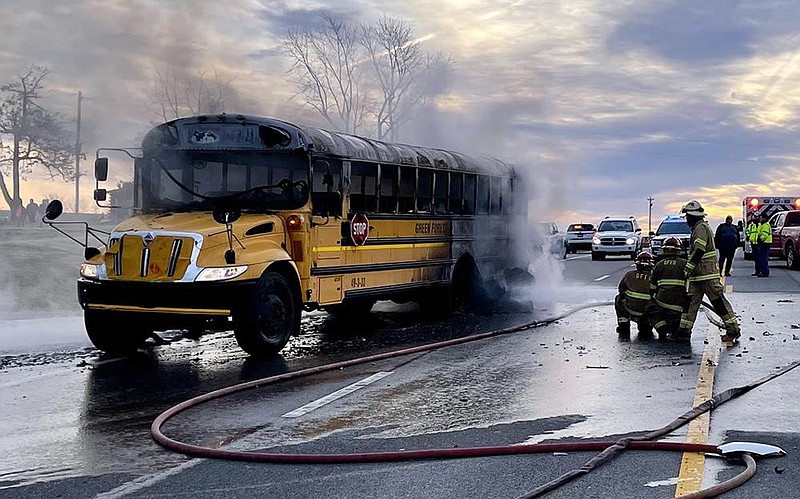 First responders handle a school bus fire Wednesday after a car rear-ended the bus while it was stopped picking up children on U.S. 62 near Green Forest in Carrol County. The driver of the car was killed in the crash. (Special to the Arkansas Democrat-Gazette/John Bailey)

A Harrison man died Wednesday morning when the car he was driving slammed into the back of a Green Forest school bus.

Christopher Anderson, 24, was driving a 2019 Hyundai west on U.S. 62 when his vehicle struck a 2021 International school bus operated by the Green Forest School District, according to a report from the Arkansas State Police.

The school bus, which also was facing west, had stopped in the right lane to pick up children, according to the report from trooper Cpl. Drew H. Widner.

The Hyundai caught fire and then the bus began to burn, wrote Widner.

"The driver of the bus was able to remove all 15 students before both the passenger car and bus were engulfed by fire," Bill Sadler, a spokesman for the state police, wrote in an email Wednesday afternoon.

"We were very fortunate to get all those children off," said Carroll County Sheriff Jim Ross. "The bus driver did a tremendous job. It's a miracle to God we have all our kids alive after seeing the aftermath [of the crash]."

Several children were injured, according to the preliminary police report, but an exact number could not be determined.

The crash occurred at 7:29 a.m., according to the report.

Bailey said the accident happened about 3 miles east of Green Forest. He said U.S. 62 is four lanes wide in that area and the speed limit is 60 mph. Bailey said the Hyundai was an Elantra model.

"Apparently the [driver] just didn't see them," said Bailey, referring to the bus. "Witnesses say the bus was stopped with its lights on. A witness said they didn't see any brake lights on the car or anything and it ran just right up underneath it. ... There may have been 2 feet [of the car] sticking out from behind the bus."