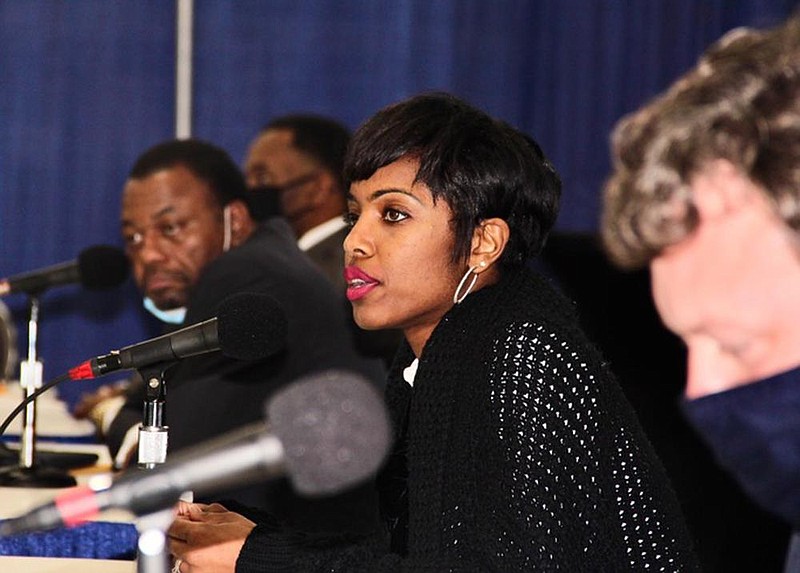 “A lot of times people come to City Council members with these ideas and they want us to execute them as well,” said Council Member Joni Alexander, chairwoman of the Traffic and Aviation Committee. (Pine Bluff Commercial/Eplunus Colvin)

If the level of enthusiasm to join a committee to study the feasibility of a drag strip is any indication of the enthusiasm for the racetrack, the project would appear to be in trouble.

A resolution was passed in November to create a committee to investigate the idea of a drag-racing track, but according to Traffic and Aviation Committee chairwoman Joni Alexander, no one has come forward.

"A lot of times people come to City Council members with these ideas and they want us to execute them as well," said Alexander, whose goal for 2021 is to establish the drag-racing committee.

With nine available slots and zero applicants, Alexander is seeking members to conduct a thorough study of the feasibility of constructing a racetrack and report its findings, conclusions, and recommendations to the City Council.

The construction of a track for the enjoyment of racing enthusiasts has been a topic of discussion for many years. In March 2019, former committee chairman of the Traffic and Aviation Committee, Ivan Whitfield, said he believed a drag strip would be workable.

Members of a drag-racing association said in a letter to the committee that they believed the track could boost tax revenue, adding that the area around the city could support drag racing.

The letter said there are about 50 drag-car owners in the city. Add to that another 200 when Little Rock, Jacksonville and Bryant are combined, the letter said. There are 30 cars in Stuttgart, 10 in Sheridan, 10 combining England and Scott, 15 combining Monticello and DeWitt, 10 in Warren and 10 in Rison, all of whom would participate, according to the letter.

The letter also predicted that at least 500 cars a month would race in Pine Bluff and said the track would boost revenue from the casino when the track is opened, as well as for businesses. In addition, the letter said a track would stop much of the illegal drag racing that goes on.

"Something like this can't be done overnight," Whitfield said. "It's got to be long-term."

But almost two years later and still no plan has been put into motion while illegal drag racing has been apparent on the streets. The police had their fair share of run-ins with drag racing during the early summer months of the coronavirus pandemic.

Police Chief Kelvin Sergeant said, regarding one May night, that in his 25 years of law enforcement he had never seen anything like it, referring to curfew violators who opted to drag race, drift and do burnouts in neighborhoods and on the streets.

As the Police Department tried to stop the offenders, they moved to other spots, he said.

The track would provide a legal a legal place to race, channeling the energies and skills that have caused problems for law-abiding drivers and the police, improving traffic safety and freeing police resources, proponents say.

According to the resolution calling for the committee, members will meet at least once per month and will report periodically to the Traffic and Aviation Committee detailing its progress.

The committee also would have the task of formulating a plan detailing the economic benefits of a racetrack, It also would look for possible sites; draw up laws, rules and regulations to govern the construction and operation of a track; produce a timeline for construction; estimate the operational cost; put out projections on job creation; and identify potential stakeholders and investors.

"I've had a lot of people interested and applying, but once they get the resolution and read what's required of them, they're hesitant," said Alexander. "If you know of anyone that is interested in joining this committee, please let me know."