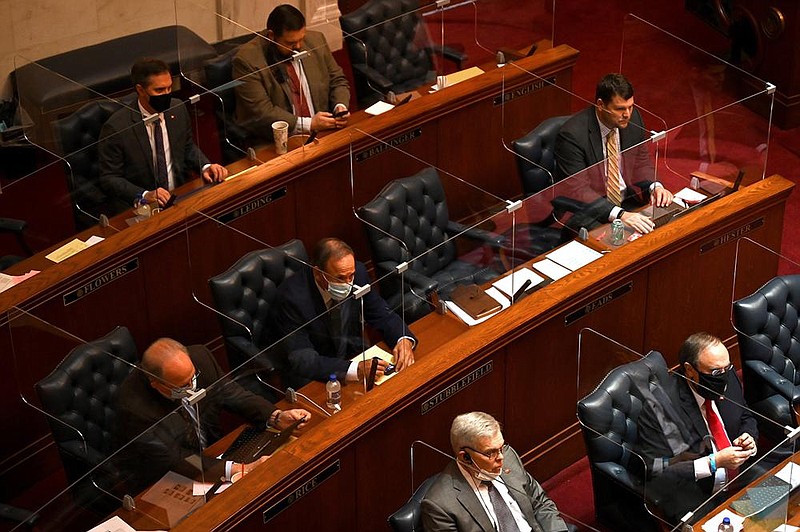 The Arkansas Senate on Wednesday narrowly approved a bill that would allow liquor stores to continue home delivery service even after the state's public health emergency ends.

The Senate voted 19-9 to send Senate Bill 32 by Sen. Jane English, R-North Little Rock, to the House for further action.

Eighteen votes are required to approve a bill in the 35-member Senate, so it cleared the Senate with one vote to spare. Six senators didn't vote on the bill; another senator was excused.

The consumer must be at least 21 years old and in a county that permits alcohol sales and the delivery must be during legal operating hours, under the bill.

Liquor store delivery to residences was made possible by an Alcoholic Beverage Control Division emergency rule change, which was possible because of the governor's declaration of the covid-19 public health emergency. There are 764 liquor stores with retail liquor permits in the state's 44 wet counties, according to the state Department of Finance and Administration.

English told senators that "there are a couple of criteria for getting correct information on who the buyer is at the residence and who the deliverer would be at the store, so this will only be in wet counties across the state."

Sen. Trent Garner, R-El Dorado, questioned whether the Alcoholic Beverage Control Division will promulgate the rules "after the fact about what this is."

English said the Alcoholic Beverage Control Division will promulgate the rules to implement the bill, if it's enacted into law.

Garner questioned granting more power to the Alcoholic Beverage Control Division to promulgate rules that could be weaponized. Garner said "[The agency] has shut down multiple businesses in a pandemic using the threat of force upon their license."

Garner later voted for the bill.

Afterward, Sen. Larry Teague, D-Nashville, who is one of nine senators who voted against the bill, said he doesn't support liquor bills.

"My world is dry down there," he said. "I am not a big fan of liquor. I drank enough as a young man."

Asked whether the state agency has shut down businesses during the pandemic, finance department spokesman Scott Hardin said Wednesday that agents have conducted more than 5,400 compliance checks to ensure restaurants, bars and clubs are following pandemic-related directives.

The Alcoholic Beverage Control Division has not revoked any permits or closed any establishments as a result of these compliance visits, Hardin said afterward.

"The only action that could potentially be considered would be a temporary revocation of the [liquor] permit for Temple Live in Fort Smith in May 2020 based on the venue's plan to proceed with a concert," he said in a written statement. "However, the permit was returned to the venue within 24 hours following a change of plans for the concert. While this took place in May, the compliance visits did not formally start until June."

An "excursion train," in the bill, is defined as "a train made available to the public through ticket sales for scheduled dates and times for operation over a common carrier railroad or railroad authority that operates on a fixed schedule or route with a specific beginning and ending point."

The Arkansas Missouri Railroad in Northwest Arkansas has an excursion train that would be allowed to apply for a permit to be able to serve alcoholic beverages to passengers in wet counties under the bill, Eads said. The bill also would allow people to reach out to the excursion train as a site for holding parties, weddings and other events, he said.

Under SB76, an excursion train operator, upon receipt of the permit, may sell and serve alcoholic beverages for on-premises consumption during legal operating hours to a ticketed passenger of legal age or to an individual of legal age attending a chartered event on the excursion train.

The bill goes to the House for further action.