Minute Man Mobile debuted last week on a parking lot at Little Rock's West Fourth Street and Broadway, with a limited menu and a grill master smoking burgers over charcoal at the back. The truck will also be there today and Friday. (Arkansas Democrat-Gazette/Eric E. Harrison)

Shorty Small's, 11100 N. Rodney Parham Road, Little Rock, had been operating four days a week until recently. Now, as one of our eagle-eyed readers has observed, it's open zero days a week. A call to the phone number, (501) 224-3344, produced this voicemail message: "We are temporarily closed. ... We're just taking a short break while Shorty prepares for something new and exciting." The message mentions a time frame of "a few weeks," but there's no telling how many that is.

Meanwhile, Dempsey Bakery, 323 S. Cross St., Little Rock, which had been closed for more than a week "for safety reasons" because an employee was exposed to the coronavirus, reopened Tuesday. The phone number is (501) 375-2257; the website is dempseybakery.com.

Minute Man debuted its new Minute Man Mobile food truck last week, parked three days on a commercial lot at West Fourth Street and Broadway billed as the site of Wes Hall's original Minute Man. (Fans will recall Little Rock's last Minute Man was catty-corner on that intersection's northwest corner.) The truck has been offering a limited menu: The Original; Famous Hickory Smoke Burger; Original Minute Man Cheeseburger; and a "Suprise Burger — Please Ask!" for $10 including fries and a canned or bottled soft drink. Bacon is an extra buck; an extra patty, $1.50; "radar" apple pies, $5. Folks in the front part of the truck were taking, assembling and handing customers' orders; in the back, a grill master, wreathed in fan-aided smoke, was cooking burgers over charcoal. Jan. 14's customers waited, just past lunch peak, in a biting wind for an average of 25 minutes (plus, of course, a good many years) for their burgers, but we didn't hear anybody complaining: The truck, which will be parked in the same place 11 a.m.-2 p.m. "or until we run out" today and Friday, does save downtowners from a drive to Jacksonville, the budding chain's first resurrection location, or El Dorado, where the last survivor of the old chain still operates. You can keep track of the truck's whereabouts at facebook.com/minutemanburgers. 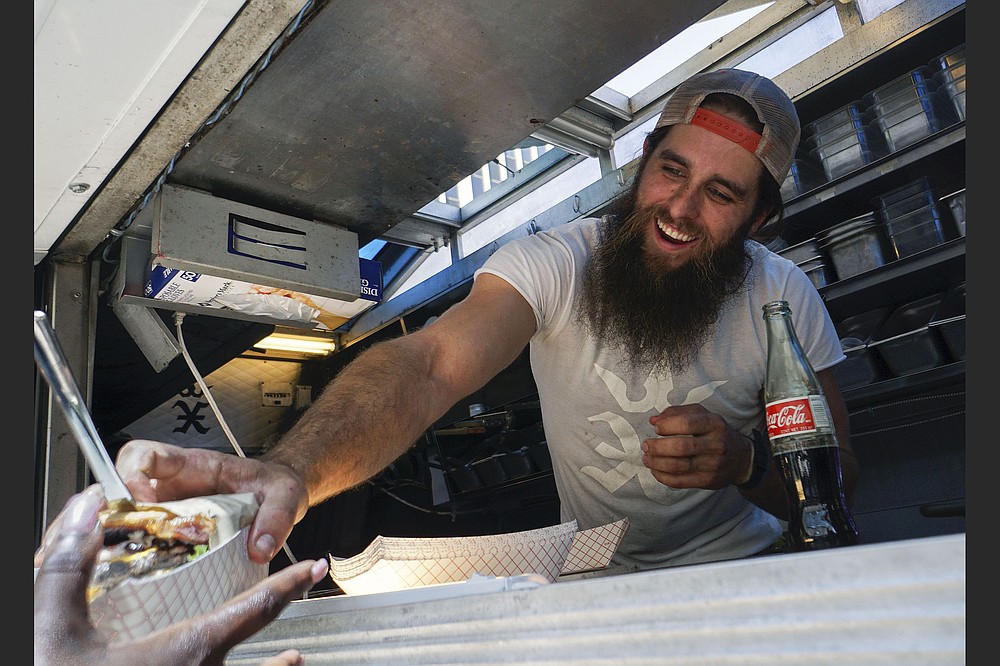 And speaking of food trucks and burgers, Kyle Pounders is beta-testing his Excaliburger food truck as a drive-thru operation this week at the "Cantrell Bottoms lot," Cantrell and Cedar Hill roads, in Little Rock's Riverdale. Pounders, in an email blast, explains that he is in the process of "training crew, sourcing the best product and fine-tuning my burger machine. If you seek fast perfection at the cheapest price, that is coming very soon; please know it is not yet here." The setup: "Burgers are now up for pre-purchase" — $10 per — during the friends-and-family soft opening, a limited number for each session, including noon-2 p.m. today and lunch (noon-2 p.m.) and dinner (p.m.) Friday-Saturday. "Traditional drive-through service (but from a food truck) will soon follow," Pounders adds, but "Can't tell you the big dream yet." Sign up and reserve your burger at Excaliburger.com.

And still speaking of food trucks, chef Amanda Ivy's Low Ivy Catering marks its second birthday, 5-9 p.m. Saturday at The Rail Yard, 1212 E. Sixth St., Little Rock, "with Lobster Buns and some sneak peeks at what we have in store for 2021," according to a Facebook event post.

Although it has been closed most of the past year because of the pandemic, the Little Rock branch of Conway coffee shop Blue Sail Coffee, which opened in 2017 in the Little Rock Technology Park, 417 Main St., Little Rock, will be vacating the space by the end of February. The park's executive director, Brent Birch, told his board at its monthly meeting last week that he is negotiating with a yet-to-be-named entity to take over the ground-floor space, presumably in April if all goes well. Meanwhile, if you're a fan of Blue Sail's bagged coffee, the Conway shop is staying open — number is (501) 358-6188 — and you can still buy it online: bluesail.coffee.

Having a swine time, wish you were here. Tulsa-based Hideaway Pizza, with Arkansas locations in North Little Rock, Conway, Benton and Fort Smith, has introduced the Aporkalypse pizza, loaded with pork shoulder, Canadian bacon, American bacon and sausage on your choice of crust, with the chain's red sauce and "a sprinkle of Parmesan-herb shake," according to the email blast we received. You can order via the website, hideawaypizza.com.

And the Arkansas Hunger Relief Alliance is partnering with Doe's Eat Place, Lindsey's BBQ & Hospitality House and Trio's on Plating Change, an initiative founded by entrepreneur and philanthropist Marcus Lemonis to fight hunger and support small businesses. Pledges by Lemonis of $35,000 to Trio's and Doe's and $40,000 to Lindsey's will allow them to prepare and distribute 11,000 meals to Arkansans in need through March 26 by helping cover the costs of food and preparation and wages for employees.

Actor Mary Steenburgen, a North Little Rock native, and her husband, actor Ted Danson, longtime supporters of the No Kid Hungry campaign to combat childhood hunger, were instrumental in connecting Lemonis with Trio's owner-chef Capi Peck, a longtime friend, according to a news release from the alliance, which also noted Steenburgen's connections to Lindsey's and Doe's.

CORRECTION: Little Rock’s final Minute Man occupied the northwest corner of the intersection of West Fourth Street and Broadway. A cell phone store and dry cleaner were built on the corner of West Third and Broadway. An earlier version of this article incorrectly sited the two businesses.