OPINION | TAKEOUT TASTINGS: Sushi, barbecue, steak and tacos will keep you on the go 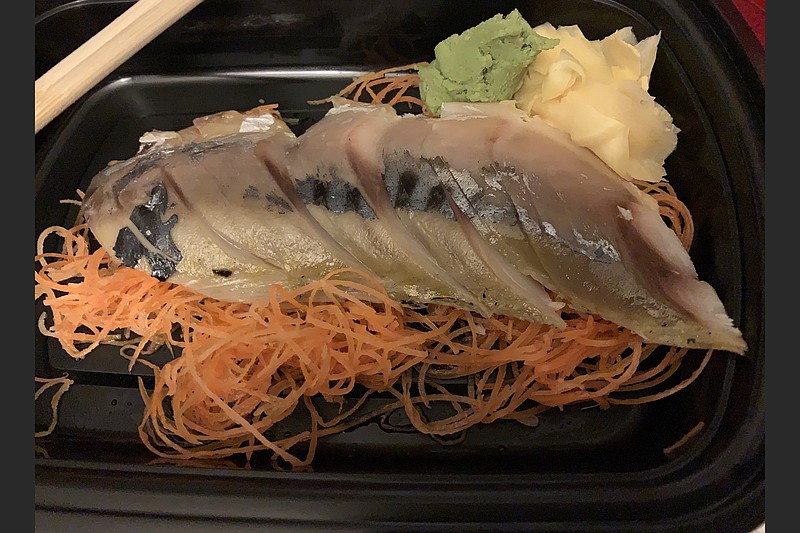 The mackerel sashimi was the highlight of our meal from Samurai Steakhouse & Sushi Bar in the Shackleford Crossing center on South Shackleford Road. (Arkansas Democrat-Gazette/Eric E. Harrison)

Covid-19 caseloads being what they are, with new and more contagious strains of the coronavirus threatening, we’re continuing to focus on orders to-go. (If we didn’t want anybody to know where we live, we’d be looking at having everything delivered. It may yet come to that — some week soon this column might instead be titled “Delivery Delicacies” or something equally clever.)

Continuing our current “columnar” practices, we pay for all our meals, we are sticking to (or close to) a respectable radius to ensure our food doesn’t chill out on the way home, and we have been avoiding chains to support locally owned businesses.

You can’t depend on menu photos, especially when it comes to sushi rolls. Otherwise we’d have known right away how similar — and how similar-looking — were the Yummy Yummy Roll (fresh water eel, crab stick, cream cheese, avocado, topped with eel sauce, spicy sauce and scallion) and the Oh My God Roll (spicy tuna, avocado, cream cheese, topped with special sauce, nori flakes and masago). In the restaurant, they would have no doubt been served separately and with the sauces on top; here, they came both together on the same little takeout sushi pan, with the sauces in separate plastic cups. 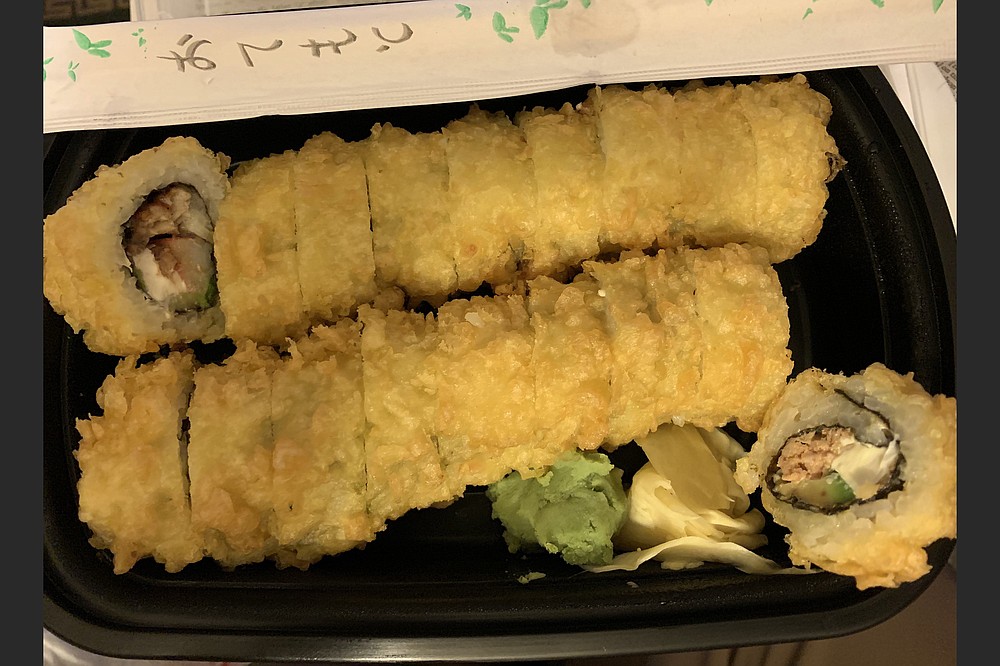 Can you tell at first glance between the Yummy Yummy Roll and the Oh My God Roll from Samurai Steakhouse & Sushi Bar? We couldn't. (Arkansas Democrat-Gazette/Eric E. Harrison)

By picking apart one slice per roll, we determined which one had the eel. The sauce — a layer of that sort of vermilion Japanese spicy mayo over a layer of teriyaki-like eel sauce — we used for dipping. It wasn’t bad, but we have to say it didn’t rate even one “Yummy,” much less two. The other roll was even further away from its name; in fact, it was just plain dull. We missed the masago (that small orange smelt roe) that was supposed to come on the top, and the “special sauce” was just that vermilion mayo.

We enjoyed our edamame; we would have preferred miso soup to the too-delicate onion broth (with a couple of mushroom slices afloat on the top) but Samurai no longer serves it. The highlight of the meal was the thick-cut mackerel — perhaps too fishy for some, but it’s one of our favorites.

HOW IT WENT/HOW IT’S GOING: Samurai’s dining room is open; we decided it would be easier to order and pay in person rather than try to order by phone, which may have been a mistake — we waited 25 minutes at the bar for our order, and we’re not sure why, since nothing we ordered was enormously complex. The place was fairly busy, with dine-in customers coming through the door in surprisingly large parties, and at least a half-dozen to-go orders in various stages of progress. 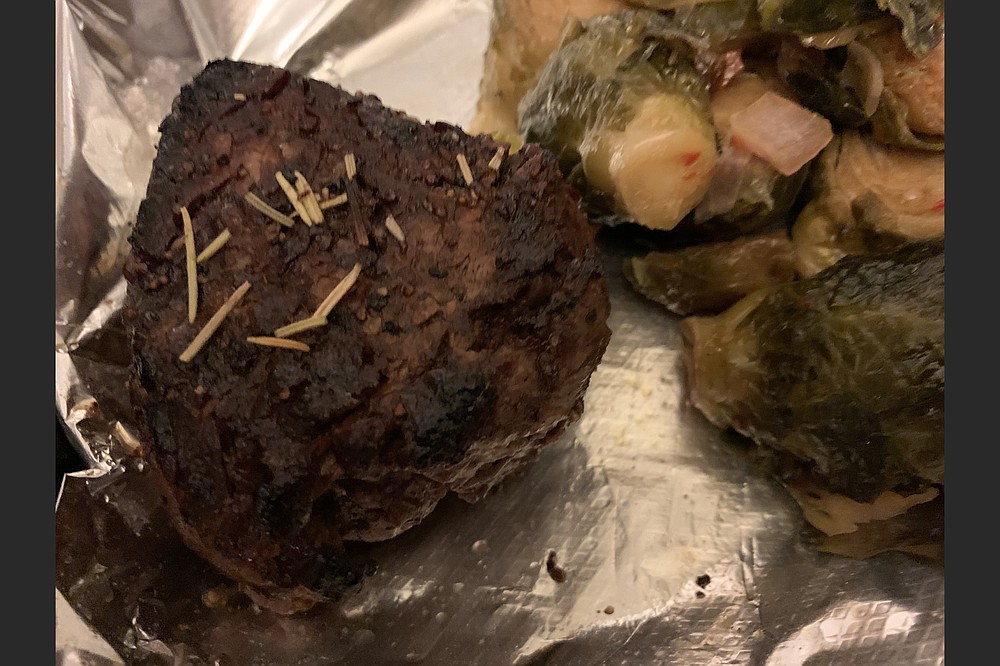 Bone’s Chophouse's 6-ounce center cut filet, with brussels sprouts on the side, was just as good for a take-out order as it was in the restaurant. (Arkansas Democrat-Gazette/Eric E. Harrison)

WHAT WE GOT: 6-ounce Bone’s Center Cut Filet ($30), with side Caesar salad and brussels sprouts; French Onion Soup ($6)

We praised Bone’s Chophouse in a July 2019 review for providing “excellently prepared steaks and a variety of other steakhouse fare at a decent and accessible price.” It’s still true for to-go orders. Without checking first to see what we had last time, we ended up revisiting the center cut filet — the price has gone up a couple of bucks in the last 18 months, but it’s certainly worth it: 6 ounces of tender beef, medium rare as we ordered it, and with just a very little rosemary for garnish, with very little, if any, added seasoning. We said then, and repeat now, that that’s a good thing — some people really like to taste the steak, not the accent, and customers can add salt, pepper, steak sauce, etc., on their own, especially if they’re dining in their own homes. We did, however, miss the dabs of balsamic vinegar that had come with the steak in the restaurant.

The side Caesar salad was coarse-shredded romaine with grated Parmesan cheese with a very good, tart, Caesar dressing in a plastic side cup, a quantity adequate to the size of the salad. We also enjoyed the somewhat spicy sauteed brussels sprouts we chose as the side item.

We also revisited, and enjoyed, the French Onion Soup ($6); the beef broth is still rich and thick with onions, with an almost over-generous number of croutons that, unfortunately, got a little soggy en route; the plentiful Gruyere layer had sunk to the bottom of the paper to-go container, which meant that, instead of enjoying it first, we saved it for last.

HOW IT WENT: We did stray a bit west of our normal comfort-zone, 15-minute radius to make a “raid” on Bone’s — it took us 18 minutes to get our food home, but you can’t always beat the traffic or traffic lights. The dining room is open; we placed our order over the phone, it was ready when we arrived, and we paid when we got there. And as it happens, the bartender is somebody we know, though we didn’t know he was working there.

HOW IT’S GOING: The dining room was fairly well occupied, and there were nearly a half-dozen other to-go orders lined up on the bar awaiting pickup. 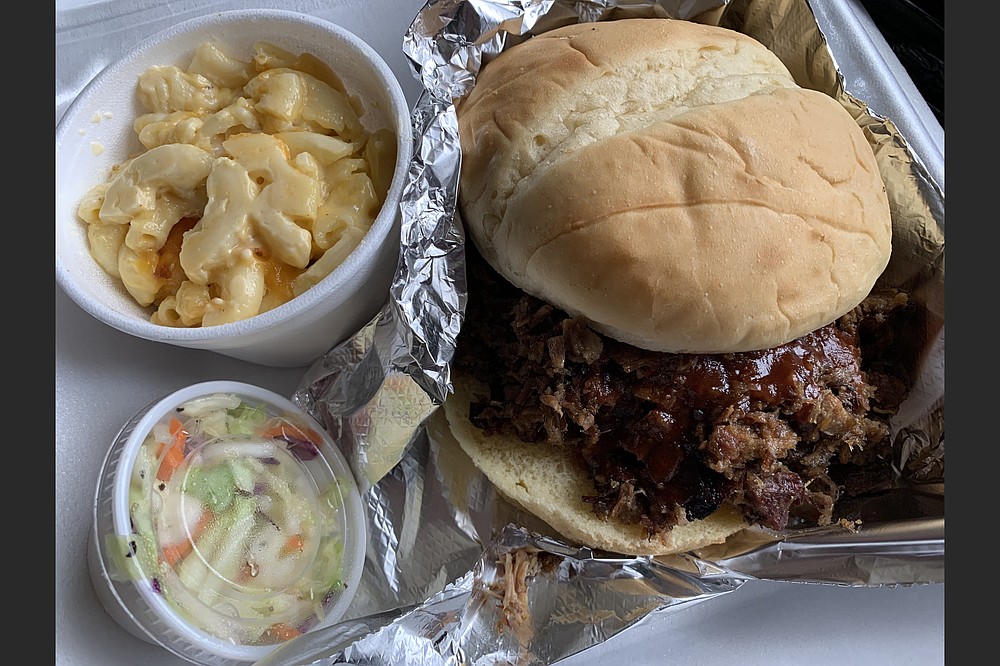 Only the extra sauce was missing from the Beast Brisket Combo from the Smoke Beast BBQ food truck. (Arkansas Democrat-Gazette/Eric E. Harrison)

WHAT WE GOT: Beast Brisket Combo (chopped, $12) with mac & cheese

This was a hefty sandwich, plump buns filled with a large quantity of chopped brisket with a killer “Beast” barbecue sauce — not nearly enough, though; we’d have liked either more on the sandwich or some extra on the side, but we either didn’t have or didn’t see that option on the menu. Next time we’ll ask. We did get some tangy slaw on the side but decided it wouldn’t particularly improve the sandwich so we left it in the little to-go cup. The combo includes a side item; we did enjoy the fairly cheesy mac & cheese. We would have enjoyed it more if it had been hotter — we probably should have started with it instead of waiting until we’d finished the sandwich.

HOW IT WENT: It took about 12 minutes from ordering at the window for our food to come out.

HOW IT’S GOING: There was a fairly large number of customers in the late portion of the lunch rush. 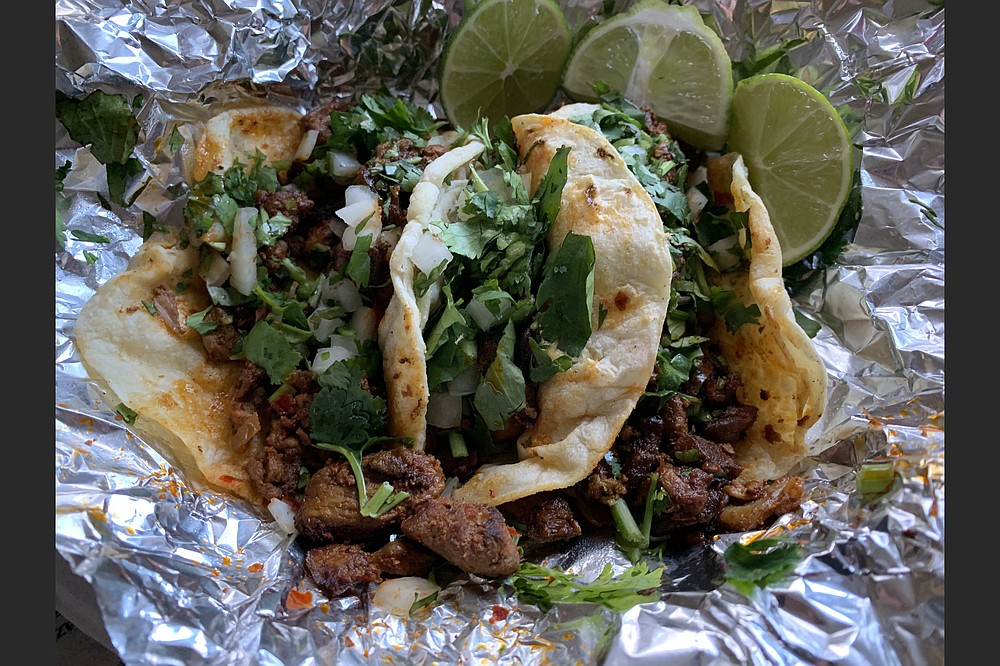 We haven’t even begun to explore the heavy Latin presence in North Little Rock’s Levy neighborhood; this is one of perhaps a dozen or more establishments, some buildings, some taco trucks, on or just off Camp Robinson Road, Pike Avenue and MacArthur Drive. This one occupies three storefronts in a tiny strip center adjoining a supermarket, two of which house the cafeteria/taqueria and the third a bakery-grocery-butcher shop and the cashier. It being a Tuesday, we gravitated toward the tacos, which were excellent — corn tortillas wrapping tender and lean marinated pork (we’ve had plenty of al pastor tacos where the meat was neither), and the kitchen honored our request to go easy on the onions while still topping the tacos with cilantro. Lime sections came wrapped in a separate aluminum foil bundle with sliced radishes, something we have not previously experienced.

HOW IT WENT: We ordered with and paid the cashier in person; it took about 10 minutes for our tacos to come out of the seemingly overworked kitchen.

HOW IT’S GOING: The place was busy, to the point to which vacant tables weren’t being quickly cleaned off, and loud. In addition to a lot of occupied tables in both dining areas, there were several to-go orders coming in and going out while we waited.