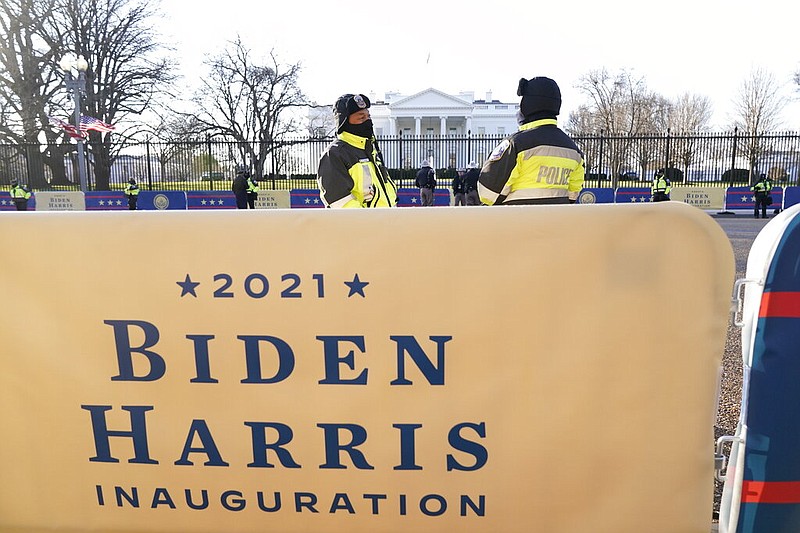 The state's Republican governor, Asa Hutchinson, was also on hand as the 46th president swore to "preserve, protect and defend the Constitution of the United States."

"It's important," Hutchinson said, "to show that we can be united after an election. And we're united for our country."

U.S. Sen. John Boozman, a Republican from Rogers, said he welcomed the chance to participate.

"I've had the opportunity to be now at several, several inaugurations, both Democrat and Republican. And it's always an honor to represent the people of Arkansas as we exhibit the peaceful transfer of power," he said.

Showing up to support that peaceful transfer, U.S. Rep. Steve Womack said, was the right thing to do.

"As a representative of the 3rd District, I think it was very important to my constituents -- all of my constituents -- that I be here," the Rogers Republican said. "It doesn't make any difference how you feel about the outcome of an election. This is bigger than that. This is about what we do in America."

An unwavering supporter of President Donald Trump before the election, Womack recognized Biden's victory once the incumbent had exhausted his legal options.

So did Boozman and three others in the Arkansas delegation – U.S. Sen. Tom Cotton of Little Rock, U.S. Rep. French Hill of Little Rock and U.S. Rep. Bruce Westerman of Hot Springs. The exception was U.S. Rep. Rick Crawford of Jonesboro.

In addition to Boozman and Womack, Cotton and Hill attended the inauguration.

The participation by Republicans -- other than Trump -- in Wednesday's inauguration is important, former Secretary of State John Kerry said in an interview at the Capitol before the inauguration.

"Frankly, I don't think anybody here is really missing Donald Trump. I think the fact that he had to slink out of town in disgrace makes its own statement. The fact that he isn't here makes it a fresh start altogether," Kerry said.

Asked whether Trump has harmed the country, Kerry said, "Not irreparably, but yes, he's damaged our interests abroad and here at home. He's damaged the fiber of our belief in bipartisanship and good governance and adherence to law."

"That's not a partisan comment; that's just the reality of where we are," Kerry said. "We have to get our country back together. We have to deliberate. We have to be respectful. We have to adhere to the law and the Constitution and we have to begin, again, to be the beacon to the world. I think you could talk to any leader anywhere in the world and most of them will tell you, frankly, that this has been a terrible period of time."

Trump's monthslong attempts to undermine public confidence in the outcome of the election has been harmful, Womack said.

Asked whether the elections had been free and fair, Womack said, "I haven't seen anything, nor have the courts, or the powers that be" that indicates otherwise.

"To the extent that we can do free and fair elections? Yes. Can we do better? Probably," he added.

With the states also vouching for the legitimacy of their elections, Congress had no authority to overrule them, he said.

It's time for people to accept the results and move on, Womack said, supporting Biden when he's right and opposing him when he's wrong.

"As Americans, we have to ensure that our country endures, and that the next administration gets an opportunity to represent the will of the people that they have been challenged to [represent]," said Womack, a retired colonel in the Arkansas Army National Guard.

"I love Womack. Womack's a good man, plain and simple," Ryan told the Arkansas Democrat-Gazette, describing the Arkansan as "a man of character and a fantastic member of Congress."

Ryan said he was at the Capitol "to respect the institution and the peaceful transfer of power. I want to respect the process. That's why I'm here."

On Jan. 6, Ryan had watched on television as rioters smashed windows, broke down doors, bloodied police officers and howled for Pence to be hung.

"It's just a horrible tragedy," Ryan said. "I spent 20 years in this building and I just cried that day. And I'm not a crier."

After losing at the ballot box, in the courtroom and in the Electoral College, Trump pressured lawmakers and Pence to reject the outcome on Jan. 6 and grant him a second term in office anyway.

As Congress discussed each state's Electoral College votes, Trump urged tens of thousands of followers to march on the U.S. Capitol, which was closed to the public because of covid-19 restrictions.

Once the rioters had been repelled, Womack, Boozman, Cotton, Hill and Westerman all voted to certify the Electoral College vote, giving 306 to Biden and 232 to Trump.

Since then, prominent Republican congressional leaders have condemned Trump, saying he claimed -- without evidence -- that the election was rigged and then misled supporters about the ability of Congress and the vice president to overturn the election results.

U.S. Rep. Liz Cheney, R-Wyo., the third-ranking House Republican, voted to impeach Trump for his conduct, saying: "There has never been a greater betrayal by a president of the United States of his office and his oath to the Constitution."

"The mob was fed lies," he said. "They were provoked by the president and other powerful people."

Asked Wednesday whether he believes the 2020 election won by Biden was "free and fair," Boozman said "yes."

Election disinformation, Boozman said, is a long-standing problem and both parties are to blame.

"For the last four years, I've been part of this. I live it every day. I've heard Democrats in various different ways undermine the legitimacy of the Trump administration. We had the same thing with the [George W.] Bush administration with the recount in Florida [during the 2000 presidential campaign, when Bush narrowly defeated Democrat Al Gore]. This time, four years ago on Inauguration Day, we had significant rioting in Washington, as a result of Trump being elected," Boozman said.

With the House voting to impeach Trump for a second time, the Senate will soon be tasked with determining whether Trump is guilty of inciting insurrection.

Rather than relitigating the past, Boozman said it would be better to focus on recovering from the coronavirus pandemic, restoring the economy and reopening the schools.

"Impeachment's about removing someone from office. The president has left. He's gone to Florida," the senator said. "With him already being gone, impeachment would be a significant expense and waste of time."

Rather than trying to delegitimize the opposition, lawmakers should seek common ground, Boozman suggested.

"I'm committed to working with the new administration anywhere we can. There's a lot of things that, historically, have been bipartisan, things like transportation, agriculture [and] veterans issues," he said. "We will be ready and willing to do all that we can to push for the things that are good for Arkansans and for the rest of the country. Those things that we feel like aren't in the best interest, then we're going to push back as strongly as we can. That's really what it's all about."

"There's going to be serious policy differences and debates," he said. "We're going to fight it out in the trenches on some issues. But in the end we have to ... find ground that we can till together to grow our democracy."

"They had disputes in it, but those disputes are resolved," Hutchinson said. "Trump lost those, Biden won and he's president."

"I'm disappointed that Trump lost, but I certainly believe that President Biden won the election, and I'm there to reflect the 200-year history of a peaceful transfer of power," he said.

Because of the covid-19 pandemic, attendance at this year's inauguration was sharply curtailed; thousands, not hundreds of thousands, were on hand.

Former U.S. Sen. Mark Pryor, a Little Rock Democrat, and his wife, Joi, had seats near the front.

"I'm really, really excited about today and trying to put Jan. 6 behind us," he said.

"It was a terrible moment in American history. It just makes me sick every time I think about it, but our democracy is strong and we'll survive it and hopefully a lot of good things will come out of it. That's all I can hope for," he said.

"I feel refreshed. I just feel like it's a brand-new day and everybody's going to come together," Joi Pryor said. "That's exactly what we need."