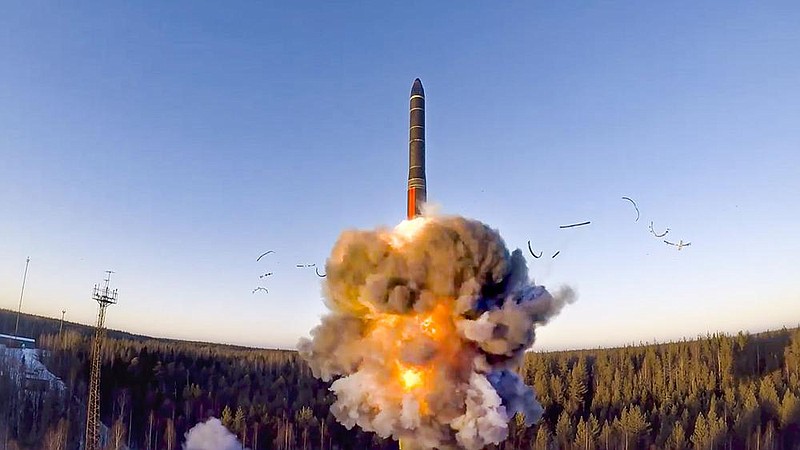 WASHINGTON -- President Joe Biden has proposed to Russia a five-year extension of a nuclear arms treaty that is set to expire in February, the White House said Thursday.

Biden proposed the extension even as he asked the intelligence community to look closely into Russia's cyberattacks, its alleged interference in the 2020 election and other actions, press secretary Jen Psaki told reporters.

Russia has said for some time that it would welcome an extension of the New START treaty, which limits the number of U.S. and Russian strategic nuclear weapons. The Trump administration made a late bid to extend the treaty, but its conditions were rejected by Russia.

Psaki noted that a five-year extension is permitted by the treaty and it "makes even more sense when the relationship with Russia is adversarial as it is at this time."

She called the treaty, which is the last remaining arms control pact between Washington and Moscow since the Trump administration withdrew from two others, "an anchor of strategic stability between our two countries."

Despite the proposal, Psaki said Biden was committed to holding Russia "to account for its reckless and adversarial actions," such as its alleged involvement in the Solar Winds cyberattack on federal agencies and departments, which many analysts and government officials have blamed on Russia; 2020 election interference; the chemical poisoning of opposition figure Alexei Navalny; and the widely reported allegations that Russia may have offered bounties to the Taliban to kill American soldiers in Afghanistan.

"Extending the treaty's limitations on stockpiles of strategic nuclear weapons until 2026 allows time and space for our two nations to explore new verifiable arms control arrangements that could further reduce risks to Americans," he said. "And the department stands ready to support our colleagues in the State Department as they effect this extension and explore those new arrangements."

Biden's national security adviser, Jake Sullivan, was to convey the extension proposal to Russia's ambassador to the U.S., Anatoly Antonov, on Thursday, according to an official familiar with the matter who spoke on condition of anonymity to discuss private diplomatic conversations.

As the Biden administration informs Moscow of its terms for an extension, the president will order Director of National Intelligence Avril Haines to provide him full intelligence assessments of Russia's alleged breaches.

The request will go out this week, said the officials.

"We will use these assessments to inform our response to Russian aggression in the coming weeks," another senior official said.

Biden's plans for potential punitive actions toward Russia at the outset of the administration is unique among his recent predecessors, all of whom attempted to turn a new page with the Kremlin in the hopes of encouraging a more productive relationship.

"This will be the first post-Soviet U.S. administration that has not come into office vowing to forge a warmer relationship with Russia," said Angela Stent, a senior intelligence official on Russia during the George W. Bush administration.

Biden's nominee for secretary of state, Antony Blinken, told lawmakers Tuesday that sanctions passed by Congress to target Moscow will be "extremely helpful in being able to impose ... costs and consequences" on Russia.

NATO Secretary-General Jens Stoltenberg earlier Thursday called on the United States and Russia to extend the arms treaty and to later broaden it.

"We should not end up in a situation with no limitation on nuclear warheads, and New START will expire within days," Stoltenberg told reporters in Brussels. The treaty expires Feb. 5.

But Stoltenberg also underlined that "an extension of the New START is not the end, it's the beginning of our efforts to further strengthen arms control."

The treaty, signed in 2010 by President Barack Obama and Russian President Dmitry Medvedev, limits each country to 1,550 deployed nuclear warheads.

Obama won Senate ratification of the treaty with a commitment to move ahead with a vast and expensive recapitalization of the U.S. nuclear force. That program, which some Democrats in Congress call excessive, is likely to be further scrutinized by the Biden administration.

At a projected cost exceeding $1 trillion over the next several decades, the plan is to replace each of the three legs of the U.S. nuclear triad -- ballistic missile submarines, nuclear-capable bomber aircraft and land-based nuclear missiles.

President Donald Trump had been highly critical of New START, asserting that it put the United States at a disadvantage. His administration waited until last year to engage Russia in substantive talks on the treaty's future. Trump insisted that China be added to the treaty, but Beijing rejected the idea out of hand.

Trump's lead negotiator on New START discussions with the Russians, Marshall Billingslea, wrote Thursday on Twitter that Biden would be making a mistake by quickly agreeing to a five-year extension.

"Hope this is not true," he wrote, referring to news reports of Thursday's proposal. "If so, shows stunning lack of negotiating skill. Took just 24 hours for Biden team to squander most significant leverage we have over Russia."

Robert Soofer, who was the Trump administration's top nuclear policy official at the Pentagon, said in an interview that he sees the Biden decision to accept a five-year extension as a lost opportunity.

"The Russians are likely to pocket this extension and walk away from the table," Soofer said, rather than accede to a longstanding U.S. request that they negotiate limits on other categories of nuclear weapons, such as tactical weapons.

Not all of Biden's aides have supported the idea of a five-year extension for the treaty.

Victoria Nuland, a longtime Russia hawk whom Biden will nominate to be the No. 3 official at the State Department, wrote in Foreign Affairs over the summer that the United States should seek only a one- or two-year renewal in the hopes of retaining leverage over the Kremlin.

"Washington should not grant Moscow what it wants most: a free rollover of New START without any negotiations to address Russia's recent investments in short- and medium-range nuclear weapons systems and new conventional weapons," she wrote.

Arms control advocates have opposed holding out for a shorter extension.

"There is no evidence that Russia is desperate to extend the treaty or that a shorter-term extension would make Russia more likely to negotiate a follow-on agreement," said Daryl Kimball, executive director of the Arms Control Association.

"A straightforward five-year extension would provide the new president with an early win and positive momentum, help restore U.S. credibility on arms control issues, and create the potential for more ambitious steps to reduce the nuclear danger and move us closer to a world without nuclear weapons."

Biden, who indicated during the campaign that he favored extending New START, is not proposing any alterations, the U.S. official said.

Information for this article was contributed by Matthew Lee, Robert Burns and staff members of The Associated Press; and by John Hudson of The Washington Post. 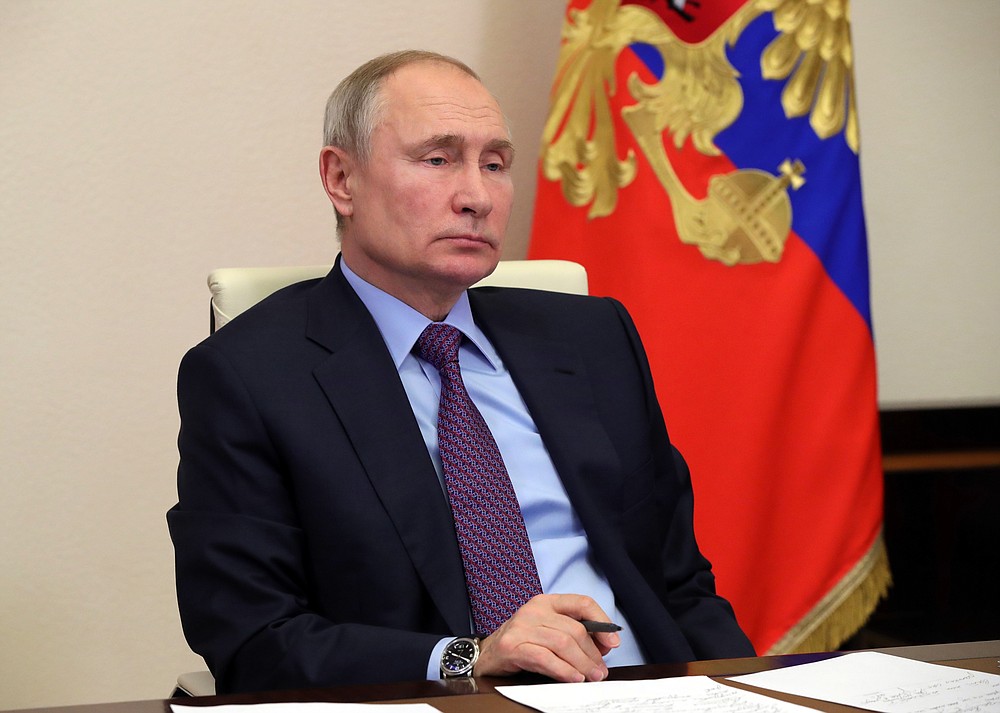 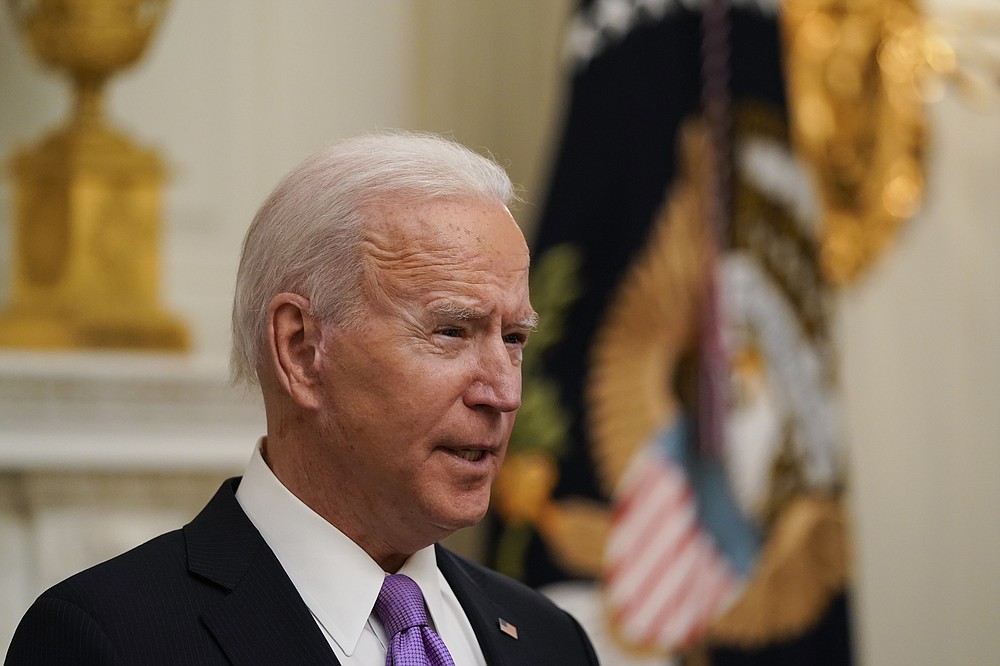 President Joe Biden speaks about the coronavirus in the State Dinning Room of the White House, Thursday, Jan. 21, 2021, in Washington. (AP Photo/Alex Brandon) 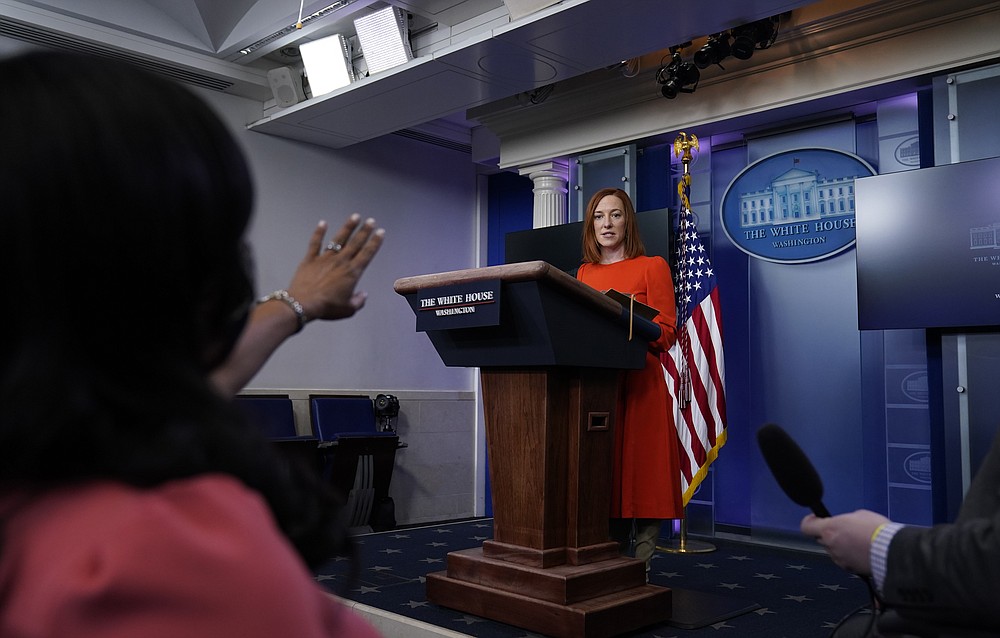