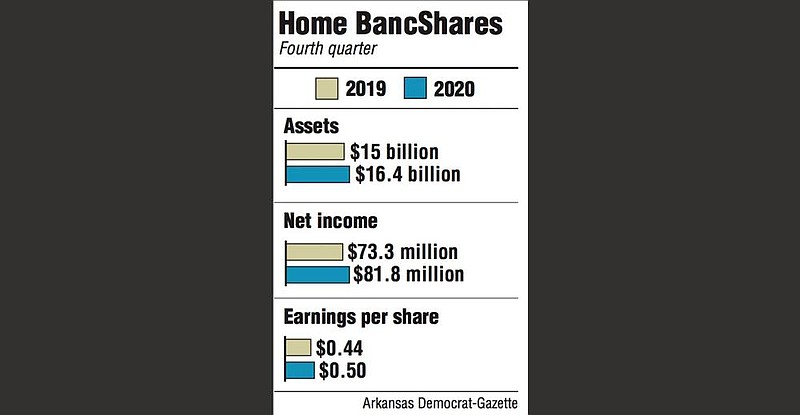 Home BancShares Inc. ended 2020 on a strong note, delivering quarterly records in net income and earnings per share. However, the bank's profit for the full year was down from 2019.

Home BancShares, which operates as Centennial Bank, announced Thursday that net income for the quarter ending Dec. 31 jumped 11.5% to $81.8 million. That was an increase of $8.5 million from the $73.3 million reported in the same quarter in 2019.

"That's the first time in the company's history to earn 50 cents in a quarter," Allison added.

Allison said Home BancShares is now ready to engage in merger and acquisition activity. "It's time for us to become more active in M&A if we can find the right opportunity," he said, noting that the company is more interested in acquiring other banks than in merging with them.

Indeed, Allison said the bank has drawn a bull's-eye around Florida. "We are aggressively looking for the next opportunity for Home BancShares," he said, adding that Florida provides the "most valuable franchise in the U.S." for expansion opportunities.

"My goal is to find the right play we can do, hopefully in Florida," he said.

A report Stephens issued soon after the earnings report Thursday cited the bank's "excellent profitability" and noted a return on assets of 2% in the quarter.

In the fourth quarter, the bank reported total assets of $16.4 billion, compared with $15 billion in the same period last year.

Like all financial institutions across the nation, Home BancShares' annual performance was ravaged by covid-19 and a new regulatory mandate to begin implementing provisions for credit loss expenses, tying up funds that otherwise would have been used to increase profits.

Even with the record quarterly performance, Home BancShares reported that organic loans in the quarter declined $470.7 million.

The slip did not bother Allison, who said the bank has been conservative in its lending practices during the pandemic. "There's really nothing wrong with sitting tight while this all blows over," he said.

For the year, Home BancShares made $691.7 million in Paycheck Protection Program loans to small business customers. The bank does not yet have a projection for 2021, but PPP lending has been open for less than a week for banks like Home.

"We can definitely tell the interest from our customers is very strong" for the new round of loans, Chief Lending Officer Kevin Hester said on Thursday's call. He noted that the bank has submitted 3,000 loans valued at about $100 million since the program restarted this year.

Zacks researchers also noted the robust performance of Home BancShares' stock, which is up 9.3% since the beginning of the year versus the S&P 500's gain of 2.6%.

Based in Conway, the company currently has 77 branches in Arkansas, 78 in Florida, 5 in Alabama and one branch in New York City.