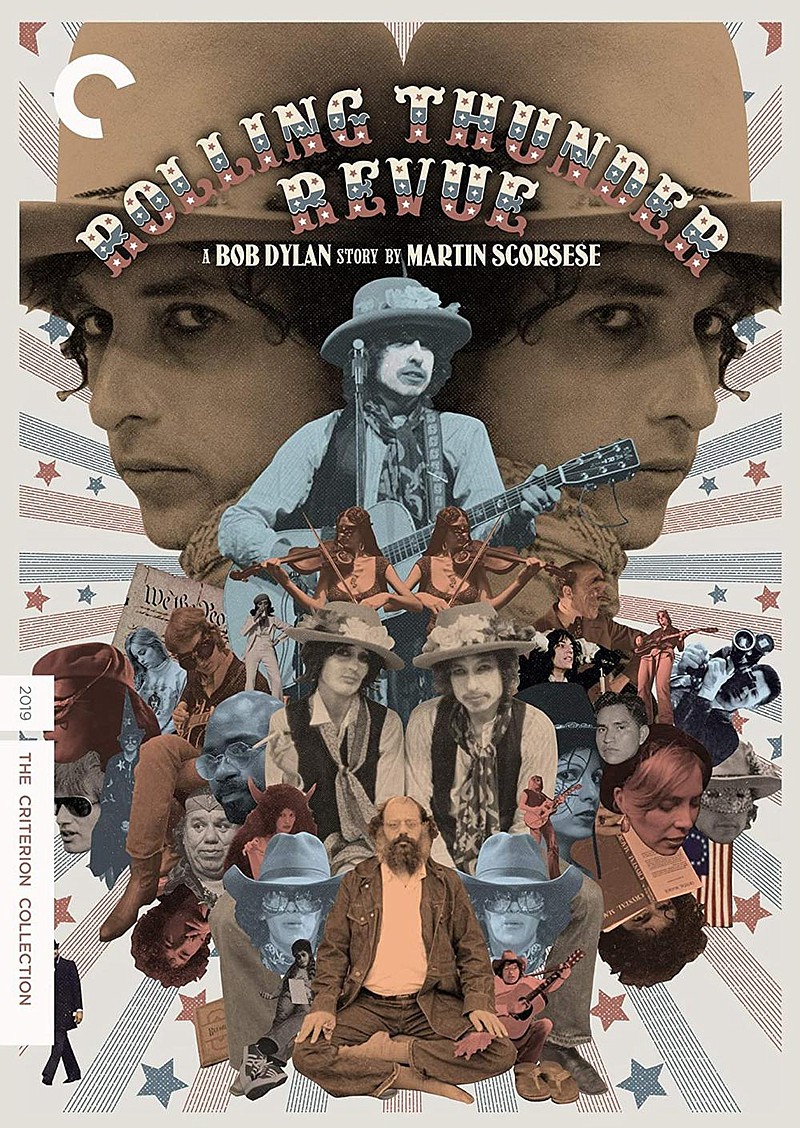 Those who miss live concerts (thanks, pandemic) as well as a combustible era (1975) when people from varied backgrounds and attitudes could disagree about all sorts of things yet gather to enjoy fine music -- should be lining up to watch this multi-layered documentary, which is now being re-issued by the Criterion Collection.

Even if you're not a Bob Dylan fan, there's much to appreciate in Martin Scorsese's second examination of the singer/songwriter (the first is 2005's "No Direction Home," which concerns Dylan's early life and career).

That film had a running time of of three and a half hours; this one is much more manageable at a little over two hours, and sparkles with restored performance footage that is wide-ranging enough to offer something to all sorts of viewers, no matter what their musical tastes.

There's a lot of storytelling -- only some of it true -- along with the music that, along with backstage goofing around, adds to the entertainment value. Not to be missed is a sensational bit of archival footage featuring Mitchell playing her new song "Coyote" -- which McGuinn introduces as being written "about this tour and on this tour and for this tour," though everyone presumes she wrote it about Shepard -- at at Gordon Lightfoot's house, with Dylan and McGuinn joining in on guitar.

This edition includes new interviews with Scorsese, editor David Tedeschi, and writer Larry "Ratso" Sloman; restored footage of performances of "Tonight I'll Be Staying Here with You" and "Romance in Durango," and of a never-before-seen cut of "Tangled Up in Blue," as well as an essay by novelist Dana Spiotta and pieces from Shepard, Ginsberg and poet Anne Waldman

"Moments in Spacetime" (not rated, 1 hour, 52 minutes) A lack of background detail and character development makes it difficult to comprehend this story of a Thai immigrant, adopted at the age of 12 by a Canadian family, who must look after her dementia-suffering, beer-swilling grandfather. With John Rhys-Davies, Patty Srisuwan, Sam Gittins; written and directed by Chris Cowden.

"Girl Blood Sport" (not rated, 5 hours, 54 minutes) A dopey, chaotic attempt to examine the sexism of the modeling business (ya think?) in which gorgeous girls, tempted by a desirable prize, compete in a brutal tournament inside a steel cage. With Destiny Soria, Kelcey Coe, Chelsea Alexandria; written and directed by Russell Brown.

"The Kid Detective" (R, 1 hour, 40 minutes) A middling-quality mystery that could use a dose of tension in which 31-year-old Abe Applebaum (Adam Brody), who was once a promising young detective, gets a chance to restart his foundering career by taking on a murder case. With Sophie Nélisse, Sarah Sutherland; written and directed by Evan Morgan.

"Dreamland" (R, 1 hour, 38 minutes) A teenage bounty hunter's fledgling career takes an unexpected twist upon his discovery of a fugitive bank robber hiding out in his small town during the Great Depression. That bank robber is played by Margot Robbie -- who was also one of the film's producers -- which helps mightily to overcome mediocrity. With Garrett Hedlund, Kerry Condon, Finn Cole; directed by Miles Joris-Peyrafitte.

"Spiral" (not rated, 1 hour, 27 minutes) A passable if murky mystery thriller with some spooky overtones in which a same-sex couple move to an idyllic small town so they and their 16-year-old daughter can enjoy a better quality of life. But the neighborhood, and its occupants, turn out to be much different than they expected. And not in a good way. With Jeffrey Bowyer-Chapman, Ari Cohen, Jennifer Laporte; directed by Kurtis David Harder.

"Mile 22" (R, 1 hour, 34 minutes) Despite a lot of ear-splitting gunshot racket, there's not much going on in this snoozy tale populated with unattractive characters, of a paramilitary officer who tries to smuggle a foreign intelligence asset with sensitive information out of an American embassy in southeast Asia. With Mark Wahlberg, Lauren Cohan, John Malkovich, Ronda Rousey; directed by Peter Berg.