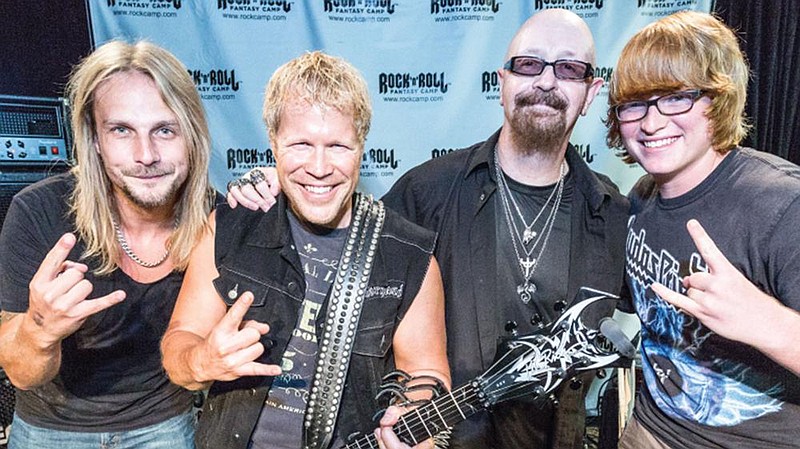 Judas Priest band members (from left) Richie Faulkner, Scott Keller and Rob Halford bond with a with fan in the documentary “Rock Camp.”

When I was in my early 30s, I got an assignment to spend a couple of days in the minor league spring training camp of the California Angels. (I was writing about two young Russian players, the first ever signed to play professional baseball in the United States.)

The public relations guy who set it up said that I should dress in workout clothes and take a glove. The atmosphere around the camp was relaxed enough that since I played the game past the high school level, I'd probably be able to play catch with my interviewees.

A couple of the coaches let me shag flies and take some balls at second base. (They wouldn't let me stand in against live pitching; they thought it too dangerous.)

That sounds great, doesn't it?

It wasn't. I was excited to go and even thought I'd be able to pass for veteran minor leaguer. But when I got there, everything moved faster than I expected. Everyone was bigger, stronger and more fluid than I expected. Motions that I had made thousands of times -- like the little sidearm flip to first after back-handing a ball -- felt alien and odd.

Even the Russian athletes -- one was a converted tennis player; the other a kayaker -- who had only a couple of years of limited baseball experience seemed more at home on the field.

I think about this experience when seeing ads for "fantasy camps" that allow ordinary folks (mainly middle-aged men of means) to pay thousands of dollars to put on uniforms and play against retired pros. The pros -- no matter how old and out of shape they are -- are playing with you in the same way dads play with toddlers. They probably think you're cute.

The levels of the game are such that a fair schoolboy athlete has no chance against someone who played at the highest level. It might be fun to hang out, to hear stories about the old days and have a catch, but just try and be competitive. They'll cut your heart out.

Maybe it's different with Rock 'n' Roll Fantasy Camp. RRFC was started in 1997 by promoter David Fishof and allows (for a price) music aficionados the chance to mingle and play with pros like Alice Cooper, Roger Daltrey, Vinny Appice, Nancy Wilson and Dave Mustaine.

"Rock Camp," a documentary that focuses on the 2019 iteration of the fantasy camp, is available for rental at afisilver.afi.com, www.angelikaanywhere.com and themiracletheatre.com and is trending at 89% positive on Rotten Tomatoes (though most of the positive reviews are mild endorsements; no one is claiming this is a great film). It's unrated and 87 minutes long.

Also, "Let Him Go," the Diane Lane/Kevin Costner/Lesley Manville modern Western, is available on-demand. It's about a couple (Lane and Costner) who travel from Montana to North Dakota in the mid-1960s in search of their 3-year-old grandson.

Aside from Kaminski's involvement -- he's directed before, with dreadful "Lost Souls" and Polish feature "Hania" on his resumé -- there doesn't seem to be that much going for this project.

In "Don't Tell a Soul," another streaming R-rated thriller, Rainn Wilson plays a security guard who -- cue Lassie -- becomes trapped in a well while chasing two brothers (Fionn Whitehead and Jack Dylan Grazer) who have robbed a house to pay for the medical bills of their sick mother (Mena Suvari).

Be on the lookout for "Baby Done," a New Zealand comedy produced by Taika Waititi, available through the usual streaming channels today. The buzz is strong with this one.