'Soul of the Dragon': Lots of funk and cheese 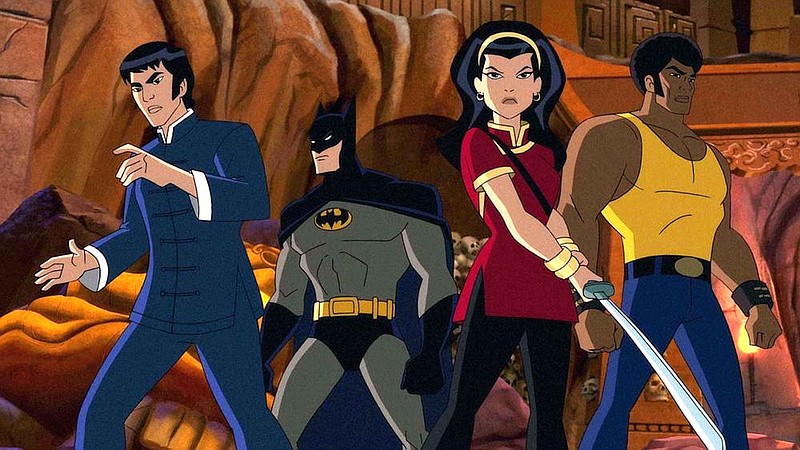 A superfluous Batman (voiced by David Giuntoli) is surrounded by his much badder friends, (from left) Richard Dragon (Mark Dacascos), Lady Shiva (Kelly Hu) and Ben Turner (Michael Jai White), in the animated film “Batman: Soul of the Dragon.”

Another year, another slew of animated Batman movies from Warner Bros. Animation. Some I'll watch, some I'll skip. DC tends to have the advantage over Marvel when it comes to animated series and movies. The '90s "X-Men" series, while legendary, will only get you so far.

But "Batman: Soul of the Dragon" caught my attention almost immediately because of who was attached to executive produce it, none other than Bruce Timm.

This is the man responsible for the Emmy Award-winning "Batman: The Animated Series," the best ever animated depiction of the caped crusader. He also helmed other projects like "Batman Beyond" and the 2001 animated "Justice League" series. If there's a DC animated project, and Timm's name is on it, assume it will have my full attention, whether it's co-creating Harley Quinn (with Paul Dini) or executive producing "Justice League vs. the Fatal Five." I love his work.

This is the second animated film DC has debuted since bringing to a close its DC Animated Movie Universe based on its New 52 line of comics. The first was "Superman: Man of Tomorrow," which was decent.

I'm still waiting to see what kind of tone DC will strike with its newest animated films. And "Batman: Soul of the Dragon" might not have been the best film to try and predict future tone from since it's an original story based off of no existing comic book storyline.

Instead, what we're given is a surprisingly unique setting for Batman. It's a story that is part '70s martial arts adventure and part James Bond homage, though heavily weighted toward the former. There are even bits and pieces of "Night Rider" in this movie. It's a tasty blend of (somewhat) cheesy action and a solid dose of funk -- in style and soundtrack.

All of those themes I mentioned above come together to create a fun Batman movie. And we haven't been treated to a "fun" Batman animated movie since 2017's "Batman and Harley Quinn."

The setup for "Batman: Soul of the Dragon" is pretty straightforward (for a comic book movie). Terrorists take control of this gate that opens when you sacrifice someone and releases an army of demons. Bruce Wayne (and his "friends" that he studied martial arts with) have to team up to stop said terrorists and demons.

The story bounces back and forth between present day, with Bruce's training buddies getting the band back together, and the past, which shows Bruce traveling to a secret monastery in the Himalayan region to study under a martial arts master known as O-Sensei.

In a strange twist, this may be the first Batman movie I've ever seen where Bruce Wayne and Batman have roughly equal screen time. That's not a bad thing. Fans are always eager to see the caped crusader, and with good reason, but I always enjoy watching Bruce Wayne having to keep up the charade of being a billionaire playboy to protect his secret identity.

Something Batman movies rarely do is show Bruce Wayne disguising himself and going undercover for reconnaissance. And he does that in the comics quite a bit. Just Google "Matches Malone."

It was refreshing to see Bruce Wayne learning combat that he would use as Batman. And equally refreshing was seeing Bruce wasn't a god among his teammates. He was probably the weakest fighter in the monastery. The movie goes to great lengths to show that.

His teammates, which all somehow upstage Bruce Wayne, are Richard Dragon, Lady Shiva and Ben Turner. They're the best part of the movie. We get a taste of what drives each character, from Richard trying to find his destiny, Shiva's strict code of honor and Ben's quest to gain control over his seemingly-unquenchable rage.

Ben had one of the most touching scenes in the whole movie, sitting down with a young boy and teaching him that martial arts aren't about mastering a kick or a punch, but instead mastering your own mind and heart. That message stuck with me after the movie's credits rolled.

Seeing as characters are the most important part of any story, I wish the movie had been expanded by another five to 10 minutes just to give each teammate a little more time to be fleshed out.

Bruce and Richard, in particular, could have used a little more development. It feels strange to write a small complaint about Bruce being a little too bland for the main hero of the story, but I'd almost call this a "Batman adjacent movie" instead of a pure Batman film. He really does share the story equally with his teammates.

There are some stories Batman gets thrown into where I question the need for him, such as "Justice League Dark." It's a movie about magic and the more supernatural members of DC Comics, people like Deadman and Zatanna. It should have been headlined by John Constantine (whom I like a hell of a lot more than Bats), but it seemed like DC just didn't have enough in that character to bring eyeballs to the movie. So Batman, a character with no connection to magic or the supernatural, was shoehorned into the plot.

Was Batman necessary in this film? It would have been fine watching Lady Shiva, Ben and Richard take down hordes of ninjas and snake demons. But DC knows if they slap Batman onto something, it'll get a lot more attention.

To the credit of "Batman: Soul of the Dragon," the action is superb. Crafting animation is already difficult enough, but to draw characters racing through martial arts combat had to be a herculean task. And the artists at Warner Bros. Animation did a hell of a job. Every dodge is fluid, every punch powerful, every sword slice zings through the air. The teamwork of Bruce and his allies, combined with the nearly nonstop action (they had a lot to cram in 70 minutes) make for a lively and enjoyable film.

What really helps to enhance its mood is Joachim Horsley's score. The soundtrack provides an ocean of funk for every fight scene.

The movie's villain isn't much to write home about, just a generic terrorist/cult leader. I wonder how you could make the leader of a snake cult dull, but somehow the writers achieved that. Maybe that 70-minute constraint played a part, especially when Bruce had three other teammates.

The other complaint I have with this movie is the ending. It's very ... bizarre. I won't spoil it for you, but it's hard to understand what writer Jeremy Adams was going for. I can't really call it a cliffhanger because I doubt this film will get a sequel. It just left things strangely unresolved and generated more questions than it answered.

With a plot so simple (again, by comic book movie standards), this story should have been a piece of cake to wrap up. Instead, Adams decided to, I don't know, attempt to subvert expectations without a thought for what the ending does to the movie's continuity. And speaking of continuity, where was Alfred in this film?

I get that they wanted an original story, but "Batman: Soul of the Dragon" puts Bruce Wayne in charge of a nightclub and leaves out his only living family member. You can't have Batman without Alfred.

None of the issues I raised is fatal, but they do keep it from being a perfect entry in the Batman universe. I'd like to see more original stories and experiments in theme for DC's animated future.

"Batman: Soul of the Dragon" is available now on digital services, or you can pick up the DVD on Tuesday.