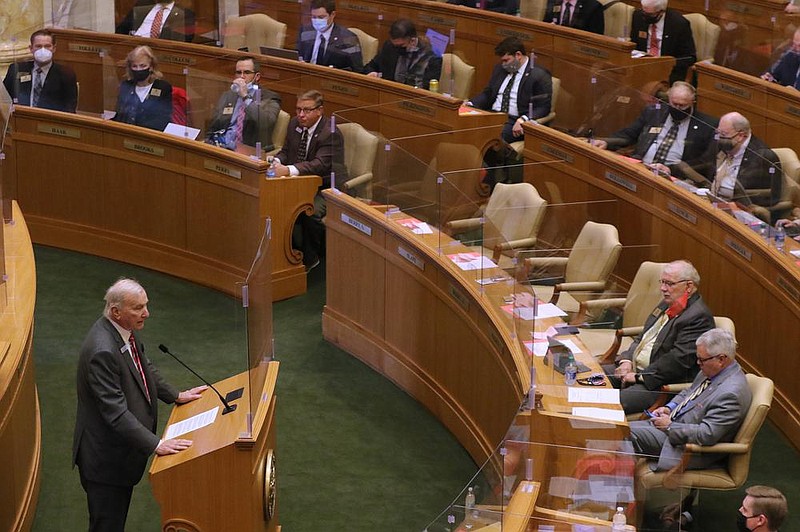 “I’m saddened every day when I think of this loss of life in this so-called civil society,” Rep. Jim Wooten, R-Beebe, said Thursday in presenting a resolution in the House to set Jan. 22, the date of the Roe v. Wade abortion ruling, as the “Day of Tears.” It was approved on a voice vote. (Arkansas Democrat-Gazette/Thomas Metthe)

Legislation that would allow cities and counties to take out bond initiatives to develop broadband infrastructure was favored unanimously Thursday in the Senate Committee on Agriculture, Forestry and Economic Development.

Senate Bill 74, by state Sen. Ricky Hill, R-Cabot, says local governments that take out bonds would pay back the bonds by leasing out the infrastructure they develop to broadband providers, which in turn would provide the service to local residents.

“This opens it up where we can get some new competitors into this field,” Hill said.

The committee vote sent SB74 to the Senate floor for consideration.

Legislation that would allow the state to rescind the licenses of masseuses after a prostitution conviction was supported in the Senate Judiciary Committee on Thursday.

State law already prohibits anyone convicted of prostitution in Arkansas or another state from becoming a licensed massage therapist. Senate Bill 87, by state Sen. Bart Hester, R-Cave Springs, would also add prostitution to the list of offenses that can cause a therapist to lose a license.

The bill cleared the Senate committee by a voice vote, and was sent to the full Senate for consideration.

The House on Thursday passed legislation that would extend the time period after which new residents are required to register their vehicles from 30 days to 60 days.

The sponsor, Rep. Frances Cavenaugh, R-Walnut Ridge, said the change would not affect the tax rate, though it may affect when the revenue is collected.

Cavenaugh is the chief financial officer of Cavenaugh Auto Group, a car dealership.

The Senate voted 35-0 to send Senate Bill 115 by Sen. Alan Clark, R-Lonsdale, to the House for further action.

The ASU board of trustees now has five members, he said, and this bill would expand its ranks to seven.

“This is the final step for the merger of Henderson State University into the ASU System,” Clark said. HSU will continue to have its own appropriation as part of the ASU System, he said.

The Senate voted Thursday to approve a bill that would rename the College of the Ouachitas in Malvern as Arkansas State University Three Rivers.

In a 35-0 vote, the Senate sent Senate Bill 115 by Sen. Alan Clark, R-Lonsdale, to the House for further action.

The board of trustees for the College of Ouachitas voted in February 2019 to join the ASU System and then voted in September to change the name of the college to Arkansas State University Three Rivers, Clark said.

House lawmakers back ‘Day of Tears’

House lawmakers Thursday in a voice vote adopted a resolution calling on Arkansans to lower flags to half-staff on Jan. 22 to mourn aborted children.

House Concurrent Resolution 1007, by state Rep. Jim Wooten, R-Beebe, calls for Jan. 22 — the anniversary of the U.S. Supreme Court’s Roe v. Wade decision — to be remembered “in perpetuity, as the ‘Day of Tears.’”

“I’m saddened every day when I think of this loss of life in this so-called civil society,” Wooten said.

Several Democrats, including state Rep. Reginald Murdoch, D-Marianna, spoke against the resolution, saying it appeared to unfairly condemn women who received abortions, which are legal.

Gov. Asa Hutchinson said in a statement Thursday that he expects to lower the flag at the Governor’s Mansion in Little Rock.

The House unanimously voted to pass legislation Thursday that would expand access to specialty court programs such as drug courts and veterans courts.

The legislation, House Bill 1059, is sponsored by Rep. Carol Dalby, R-Texarkana, a former judge and the chairwoman of the House Judiciary Committee.

Dalby said the bill would make it easier for a participant in a specialty court program to transfer to a similar program in another area of the state if he moves. The bill also would add specialty court services for drunken drivers and veterans.

Specialty courts allow a defendant’s sentence to be held in abeyance until he completes court-ordered treatment programs.

Dalby said the courts “help keep the prison population down.”

The bill passed in the House 89-0 and heads to the Senate.

The House approved legislation Thursday that would give the Arkansas Department of Health the authority to request copies of written and electronic prescriptions in order to audit information that is submitted to the state’s Prescription Drug Monitoring Program.

Rep. Justin Boyd, R-Fort Smith, said the Health Department already has the authority to monitor information submitted to the program in order to identify prescribers who are acting unethically.

Boyd’s House Bill 1107 would allow the department to double-check that information against the original prescription records. 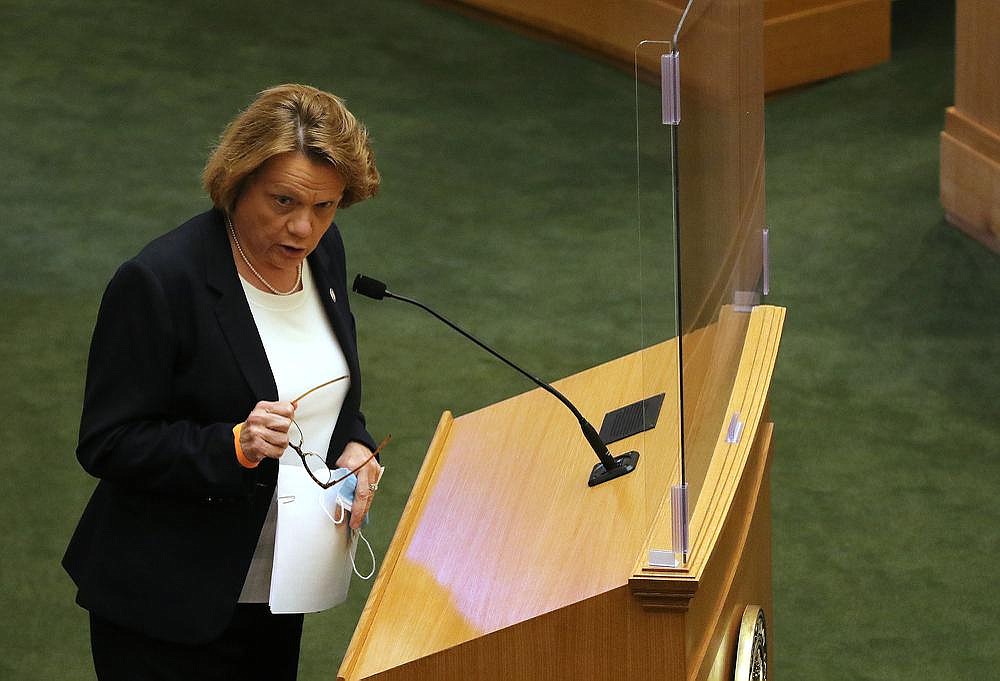